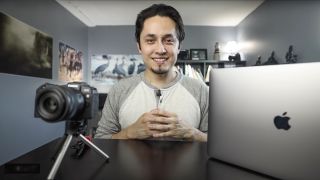 Whether you're adjusting to a new normal spent working from home, or you're simply looking for a powerful update to your usual webcam, knowing how to use your camera as a webcam could come in handy.

During lockdown, with many of the best webcam manufacturers initially unable to meet the sudden demand from consumers newly working from home, many of the major camera manufacturers released software that allowed a number of their cameras to function as webcams.

Read on below to discover which cameras can be converted into webcams – and how to make the most of their superior image quality. We've divided them into their respective brand to help you find the info you need to know as easily as possible.

If your specific camera isn't represented on the lists below, that doesn't mean that you can't use it as a webcam. Check out how you can DIY your camera into a webcam by using a dongle. Alternatively, discover how to use your camera as a USB webcam on Zoom with this Macbook hack.

How to use a Canon camera as a webcam

Canon has released free webcam software, EOS Webcam Utility Beta, to turn many EOS and PowerShot cameras into high-quality USB webcams without the need to purchase any additional hardware. Once you've downloaded EOS Webcam Utility Beta, simply connect your camera to a Windows or Mac computer with a USB cable. Then just configure the camera with your video conferencing software of choice and you're ready to go!

“In unprecedented times, it’s imperative for Canon to provide our customers with useful, simple and accessible solutions to assist them in whatever imaging needs they have,” said Tatsuro Kano, executive VP of Canon USA's Imaging Technologies & Communications Group.

“Our goal is that the EOS Webcam Utility Beta software can help reduce some of the remote workday stress for employees who are tasked with video conferencing and virtual meetings.”

For more information and to download the software, visit the Canon microsite. Bear in mind that, as a beta product, there may be some errors, and the software isn't supported (but will still work) outside the US.

How to use a Fujifilm camera as a webcam

Fujifilm has recently announced a software update that allows you to convert their cameras into a webcam. According to Fujifilm, users will be able to install the software on any PC, and using a USB cable, connect a supported camera to fulfill their web-conferencing needs. Fujifilm say: "The enhanced quality of our digital cameras compared to built in webcams will improve your web conference with help from advanced functions such as the Film Simulation modes, which delivers Fujifilm's unique color profiles".

If you're lucky enough to have a Fujifilm camera on the list above, then you can download this software update from Fujifilm here.

How to use the Sigma fp camera as a webcam

In May, Sigma announced that the UK's Sigma fp camera sales jumped during lockdown, an uplight that Sigma believed might be down to the camera's ability to be used natively as a webcam. While many cameras on the market require a special video capture device in order to be used for live streaming, the Sigma fp can be plugged directly into your Mac or PC using a USB-C cable. All you need to do is to change the USB Mode in the camera settings to Video Class (UVC).

For more information on using your Sigma fp as a webcam, read this detailed blog by Sigma ambassador Paul Monaghan.

How to use a Panasonic camera as a webcam

So, how do you use your Panasonic camera for streaming? All you need is to download Lumix Tether for Streaming (Beta), which is derived from the existing Lumix Tether software.

However, the new program enables you to remove graphical user interfaces (such as focus area marks and control panels) that usually appear in Live View mode during normal tethered USB shooting. It's worth nothing that there are a couple of provisos: firstly the software is in beta, so it may not function correctly and is not eligible for warranty or customer support from Panasonic.

Secondly, it is currently PC-only. We certainly hope that Panasonic will follow the lead of other manufacturers in expanding the software to support macOS users as well, but so far you can only stream these cameras on a Windows machine.

How to use an Olympus camera as a webcam

Not to be outdone, Olympus has its own webcam app that will enable you to connect your camera to your Windows computer (Mac is not yet supported) and use it like a webcam for streaming and video conferences without any additional hardware – all it requires is a USB connection.

The software currently works with the full Olympus OM-D E-M1 flagship range – the Mark I, II, III and X – and the Olympus OM-D E-M5 Mark II. You simply download the free Olympus webcam software, connect the body to your PC computer via USB, switch on the camera and set it to tethered mode, turn on a web conferencing application and select “OM-D Webcam Beta” in the app’s settings.

As with other beta software, keep in mind that this is an early release and not a finished product.

How to use a Nikon camera as a webcam

Nikon has recently announced that users of certain Nikon cameras will be able to use their camera body as a webcam, thanks to a new piece of software named Webcam Utility – due to be released in August.

The beta version of the software will enable a select number of Nikon mirrorless or DSLR cameras, including the new Nikon Z5, to be used as a webcam on Windows computers (unfortunately it doesn't appear that Mac users will currently be able to use this software). However, Nikon has also stated that future Nikon mirrorless and DSLR cameras are also scheduled to be compatible with the Webcam Utility software.

To use this new software, simply install the beta version to a computer than runs Windows 10 and connect the compatible Nikon camera body via a USB cable. Users will then be able to use their camera for all of their livestreaming needs, including teleconferencing and gaming.

How to use a GoPro camera as a webcam

While DSLRs and even mirrorless cameras might be a bit bulky to mount above your screen, action cams are just the right size – so it's only fitting that you can now use your GoPro as a webcam.

GoPro has just released a new app that enables you to webcam with your action camera with no extra hardware – all you need is a a USB cable, which can even power your GoPro if you plug into a USB-C connection that supports power delivery.

Currently the software is Mac-only, and the only supported camera is the GoPro Hero8 Black, though a Windows update is being worked on. Download GoPro Webcam Beta and watch the video for more information.