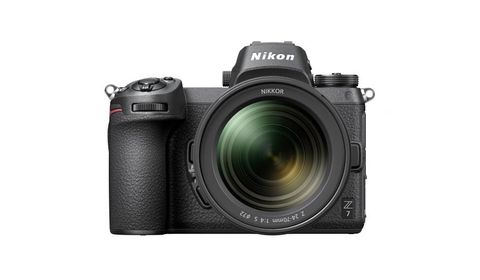 With straight fives for features, build & handling and performance, the Nikon Z7 is an instant classic. It’s a superb (and superbly made) mirrorless camera.

The Nikon Z7 couldn't have come at a better time for the camera company. Nikon has had to sit there and watch as Sony has dominated this lucrative, and increasingly popular, area of the camera market.

UPDATE: It looks like the Nikon Z7 is set to get eye-tracking autofocus in an upcoming firmware update. This means that the AF functionality will be vastly improved. Other updates include CFexpress memory card support and RAW Video support. There's also a new Nikkor Z 24-70mm f/2.8 S lens – which we've just given a full review.

It is worth noting before you read our Nikon Z7 review that the  Nikon Z6 is a more affordable 24-megapixel model aimed at enthusiasts, while the Z7 is the 45.7-megapixel flagship model.

The full-frame CMOS sensor in the Z7 sounds very similar to the one in the Nikon D850 DSLR. The difference here is that Nikon has built in a sophisticated on-sensor phase-detection system.

Its 493 phase-detection AF points cover 90% of the image area and work in combination with a conventional contrast autofocus system.

It’s a pretty spectacular-sounding setup for a first attempt at full-frame hybrid autofocus; Nikon certainly appears to have hit the ground running.

Also new is an in-camera image stabilisation system (IBIS). This is another first for Nikon, as all of its previous interchangeable lens cameras have used lens-based VR (vibration reduction).

The Z6 and Z7 can still use existing Nikon VR lenses (more on this shortly), and the two systems should work seamlessly together. The in-body VR, however, means that Nikon users will also get the benefit of the new 5-axis, 5-stop VR system, even with non-VR lenses.

With the new mirrorless body design comes a new lens mount. At 55mm across, the new Nikon Z mount is 11mm wider than its Nikon F DSLR mount, and Nikon says this has “liberated” its lens designers, making it possible to produce new, more ambitious lenses (a 58mm f/0.95 Noct lens is on its way) and deliver a step up in optical quality.

The flange-to-sensor distance is just 16mm, which is a lot shorter than the regular Nikon F mount.

This allows plenty of space for the new Nikon FTZ lens adaptor, which can be bought separately or as part of a bundle with the new cameras. With this adaptor, you can fit all 90 or so current Nikon lenses and get full autofocus and automatic exposure, and up to 360 lenses with just auto exposure.

The new mount does not have an autofocus screw drive, so older AF lenses are restricted to manual focus, but this wide compatibility with existing Nikon F lenses will make it easy for current Nikon owners to migrate to the new mount at their own pace.

Before, Nikon owners tempted by full-frame mirrorless systems faced a complete and expensive system swap to a different brand. Now all you have to do is buy a new body.

There are new Z-mount lenses to go with the new cameras, of course. Initially, there’s a 24-70mm f/4 lens, a 35mm f/1.8 and a 50mm f/1.8, and we’ve tested the first two alongside the Z7 in this review. For our pick of the top choices currently available, see our guide to the best Nikon Z lenses.

Nikon’s roadmap includes another six Nikkor Z-mount lenses in 2019 and three more in 2020. We’ve tried the Z7 and mount adaptor with several DSLR lenses from Nikon and Sigma, both full-frame and APS-C format, and all appear to work perfectly with the new camera.

For anyone who’s yet to decide on their full-frame mirrorless system, the Nikon Z7 offers a compelling alternative to the Sony Alpha 7R III. In many respects the two cameras are very similar, so the specs are likely to be examined very closely.

The only possible point of controversy is Nikon’s choice of memory card format. There’s only one card slot, for a start, and it’s XQD. It’s a fast, robust, forward-looking format entirely appropriate for the Z7 and its audience, but it does mean starting a whole new memory card collection for anyone who’s been using SD or CF cards.

We’re told the card slot will be compatible with the brand-new and even faster CFexpress card format when it arrives – physically, these are the same as XQD cards.

Externally, the Z7 is a lot like its chief mirrorless rival, the Sony A7 series, and totally unlike Nikon’s DSLRs.

It’s much smaller than the Nikon D850, the DSLR whose technology it largely shares. The smaller size can be both a good and a bad thing. It makes mirrorless cameras like this both lighter and more portable – one of their key selling points – but it can make the handling feel unbalanced when you use larger lenses.

This is perhaps less of a problem for the Nikon Z7 than it is for the Sony A7. The Nikon feels slightly larger and has a good-sized grip. It is also released with the new, compact Z-mount 24-70mm f/4, which feels like it was designed to fit the camera body exactly.

Even with the FTZ adaptor fitted and used with some of Nikon’s bulkier pro DSLR lenses, the Z7 isn’t thrown too badly out of balance, and the arrival of its dedicated battery grip should further improve the handling with big lenses.

Nikon fans should note that the Z7’s control layout is not the same as on Nikon’s pro DSLRs. Instead, it has a regular mode dial rather than a simple mode button, and the drive mode is selected via a button rather than a dedicated control dial.

The smaller body leaves just a little less space for external controls, although there is still room on the back for a focus point lever and an AF-On button. The four-way navigation pad feels slightly small and stiff, but otherwise the Z7 handles very well.

The viewing system is good too. Some photographers will still prefer an optical viewfinder over an electronic one, but Nikon has nevertheless pulled out all the stops to make the Z7’s EVF as good as possible.

With a resolution of 3.69 million dots, it’s so sharp that you really don’t see any granularity at all, and its digital nature only becomes apparent if you move the camera quickly and see some slight ‘lag’ or blurring. Having said that, the Z7’s EVF seems less prone to lag and smearing than others we’ve tried.

Viewfinder lag isn’t an issue during normal static photography, and might only be noticeable with fast panning movements and during continuous shooting.

Like other electronic viewfinders, it has a distracting ‘stop-frame’ look at high continuous shooting frame rates, rather than the fluid appearance of an optical viewfinder. It doesn’t stop you getting the shot, but it’s something you might not adapt to straight away.

Nikon has clearly made viewfinder quality a priority, though, using an aspherical element and fluorine coatings for the viewfinder eyepiece.

The rear touchscreen display is rather good too. Its 2.1-million-pixel resolution means it looks extremely clear and sharp, and the tilting mechanism is, as ever, useful for low-angle shots and video. It’s a shame there’s no sideways pivot, though, because the tilting mechanism is only useful when the camera is held horizontally.

You can use touch control to select the focus point, focus and shoot with a single tap, and make changes to the camera settings.

It is really useful to be able to tap the screen to shoot when the camera is being held away from your eye, but the downside of touch control on all cameras (not just this one) is that it’s easy to change settings accidentally while handling the camera, or find that the focus point is way off in the corner of the frame when you go to take a picture.

Another issue is that when you flip up the rear screen for a low-angle shot and use your finger to set the focus point, the viewfinder’s eye sensor is activated and the camera switches the display to the viewfinder. You can get round this by manually switching between the viewfinder and screen display, but it is a mild annoyance all the same.

The OLED status panel on the top of the Z7 is a big step forward, though. It’s not particularly large, but the reversed white-on-black text is much to see than the information on regular ‘green’ LCD displays.

With its 45.7-megapixel sensor and new-generation Z-mount lenses, the Z7’s image quality is going to be a major selling point.

It doesn’t disappoint. We’ve already seen what this sensor (or its close relative) can do in the Nikon D850, and in our lab tests the Z7 matches or even improves on this performance. The resolution of both cameras is the highest we’ve recorded from full-frame cameras, hitting the maximum 40 resolution of our optical test chart right up to ISO 3,200.

Noise levels are slightly higher than the Sony Alpha 7R III, its chief rival, but we’ve seen this before with Nikon cameras and the differences are not too great. What is interesting, though, is that the Z7 produced slightly less noise and higher dynamic range in our lab tests than the D850, perhaps as a result of the Z7’s newer Expeed 6 image processor.

The lab results are borne out in real-world use, where the combination of this high-resolution sensor and Nikon’s new Z-mount lenses proves pretty spectacular.

Nikon’s default Matrix metering system proved as reliable as ever in our tests, and if anything seemed tuned towards preserving highlights.

The autofocus system is especially impressive. It’s fast and quiet and its wide frame coverage makes it flexible too. Much of the credit for the autofocus performance must go to the new lenses, which are smooth and near-silent in operation – this makes them ideal for video too, and not just stills photography.

This is a deeply impressive camera. It’s the company’s first-ever full-frame mirrorless camera, but it’s such a polished, well-designed camera you’d think Nikon had been making them for years.

The Z7, D850 and Sony A7 III all match or exceed our chart’s 40lw/picture height limit at low to medium ISOs, though colour moiré affects the Sony’s results.

The Canon has a slight noise advantage across the ISO range, as you’d expect from its lower-resolution sensor. The Z7 is slightly less noisy than the D850.

All four cameras are very closely matched. The Canon EOS 5D IV has a very slight advantage at lower ISOs, but this disappears by ISO 1,600.

With straight fives for features, build & handling and performance, the Nikon Z7 is an instant classic. It’s a superb (and superbly made) mirrorless camera.

Canon’s new full-frame mirrorless model wasn’t available to test yet, but we can pit the Z7 against its DSLR cousin, the EOS 5D IV, which is starting to look underpowered compared with its recent rivals.

D850 vs Z7 – with specs and performance so similar, it’s going to come down to the style of camera and shooting experience that you prefer. The Z7 is a D850 alternative, not a D850-beater.

Recent price drops have made the Sony A7R III a more tempting proposition financially, but has its reign in the full-frame mirrorless market come to an end with new models from Canon and Nikon?