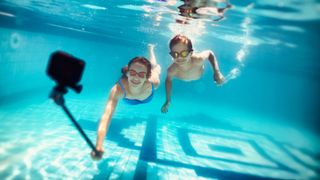 If you want the best action camera, you're spoilt for choice. Most folk would simply go for the best GoPro, but there are plenty of alternatives which are cheaper, smarter or offer better quality (but not all three, which is why GoPro is still at the top!).

We reckon the best action camera right now is the GoPro HERO8 Black. It packs in 4K video at 60fps, is waterproof to 10 metres without a case, and now offers a built-in mounting system (as well as some very clever optional accessories). But the arrival of DJI's first action camera, the Osmo Action, means GoPro now has a significant and highly respected rival in the action cam market.

Ultimately, choosing the best action cam will depend pretty heavily on what you plan to use it for. Do you need waterproofing, shockproofing, slow motion, a front-facing screen or ultimate mounting flexibility? It's worth taking some time to familiarize yourself with all these different action cams and what they offer.

You might get an action camera that's waterproof down to 30m by itself, or one that requires a housing, or indeed an action camera that isn't up to much in water but can take a serious battering without breaking. Maybe wireless functionality is most important to you, or you prize a camera that you can control via your phone using an intuitive app?

Just so you're aware, we also have guides for the best cameras for vlogging. You might want to take a look at our list of best underwater cameras while you're here.

In this article we've put together our top picks of the best action cams right now – and we can also show you some of the best GoPro accessories out there too.

The ultimate action camera is now even better – again!

The 2019 edition of the GoPro dynasty is undoubtedly the action camera specialist's best ever yet and the best action camera you can get, if your budget will stretch to it. A key difference from its predecessors is that there are fold-out feet that means that you have a camera mount built in. And then you can accessorize the Hero8 Black even more with a new series of beautifully designed optional extras called Mods - we particularly like the Display Mod, which adds a second monitor that is perfect for vloggers. These add-ons cost you more - but you don't buy the Hero8 Black if you are looking of a budget camera - you buy it because it offers the best video footage, and the best image stabilization system we have used to date.

The Hero8 Black is the new flagship, but the Hero7 Black is still great

The GoPro Hero7 Black is the action camera that brought us HyperSmooth, a brand new  video stabilization system that's so good that it awakens new creative possibilities. The shake-buster even works up to 4K 60fps. Those using a gimbal on their GoPro can ditch it because HyperSmooth gives even handheld video a silky-smooth look. However, it also brings to life a new possibility; handheld TimeLapse video. Called TimeWarp, the Hero7 Black's 2GB memory allows it to apply HyperSmooth to handheld frame-by-frame time-lapse shooting. As well as these stabilized hyperlapses, the Hero7 Black offers great dynamic range, SuperPhoto, and 12 separate voice commands. It may miss out on the new features and add-ons of the GoPro Hero8 Black, but it is still one of the best action cameras right now... and is that touch more affordable.

DJI is best known for its camera drones (and to a lesser degree for its handheld gimbal camera stabilizers) – but has turned its attention to the action camera market with the arrival of the Osmo Action. It look and feels like it has been made to be a direct competitor to the GoPro Hero7 Black – and does a real good job of giving the GoPro a run for its money. We particularly like the addition of a full-color front LCD display – which makes it one of the best action cams for selfie sequences or vlogging.

This older model is now a real bargain

The GoPro Hero7 White was officially discontinued at the end of last year - but it is still on sale at a large number of retailers. The result of these two facts is that we are now seeing some incredible deals on this model - allowing you to get a GoPro camera at a really affordable price. It was the basic model in the range, mind. There's no 4K and although there is built-in image stabilization, GoPro's most recent HyperSmooth technology doesn't make onto this camera.  Mind you, it is still waterproof down to 10m (33ft), and can shoot 1440p HD video at 60fps or 30fps, and offers wifi/Bluetooth compatiblity. Plus, of course, it can be used with the wide range of GoPro accessories.

The Olfi One.Five Black is a mild refresh of the Olfi One.Five and doesn't exactly reinvent the wheel, still topping out its 4K capture at a frame rate of 24p, but it does what it does well, and its attractive price point makes it a compelling proposition for those who don't want to pay GoPro-money for an action camera. Vertically oriented, the Olfi One.Five Black is great for clipping to bicycle handlebars, though its 30m waterproofing means it's also great for watersports. The built-in Wi-Fi allows you to take advantage of the Olfi app to control the camera from your phone – the functionality is basic, but works well. A solid inexpensive choice of action camera.

Taking more than a few cues from GoPro, the SJCAM SJ8 Pro provides plenty of the functionality of top-quality Hero cameras but at a significantly friendlier price point. It's not only got 4K footage at 60p, but this footage also benefits from six-axis image stabilisation, which really comes in handy in action-shooting situations. The standard GoPro-style mount allows the SJ8 to be mounted to anything you might want to mount it to, and there's also decent slow-motion if you drop the resolution down to 1080p or 720p. The waterproof housing is a little clunky in use, with a lever lock system that can be tricky to operate, but this is arguably the best action cam at this price.

Unbeatable waterproofing and a suite of sensors for data collection

Could you buy an action camera that only deals in Full HD resolution? The Garmin VIRB XE offers a compelling reason as to why you should. It’s waterproof to 50m without a case and can withstand temperatures as low as -10ºC, but this action camera isn’t just made of tough stuff. The Virb XE is also smart, with a suite of G-Metrix sensors that can measure GPS, compass direction, temperature and even speed, which adds an exciting layer of data to video. It can even get data from compatible ANT+ devices, such as heart rate devices and smartwatches. As a bonus, for those who think audio is just as important as video, a Bluetooth microphone can be attached to it.