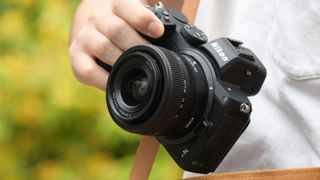 The Nikon Z5 has been officially announced, and as rumored it is a 24.3MP full-frame camera that sits between the Z50 and Z6, but possesses dual memory card slots – and comes with a brand new kit lens.

While the Nikon Z5 possesses a sensor with a similar pixel count as the 24.5MP affair on the Nikon Z6, it's actually new and non back-illuminated. And of course, it exceeds the 20.9MP APS-C sensor in the Nikon Z50 in size as well as megapixels.

Although the sensor may be different, the Z5 actually takes many cues from the Z6, such as the 273-point hybrid AF system (which can perform animal AF), five-axis in-body image stabilization, ISO100-51200 sensitivity range, and 3690k-dot electronic viewfinder. It also possesses weather sealing on par with its elder sibling, and can be used as a webcam.

Here the differences start to come into play, though – and the biggest difference is that the Nikon Z5 features dual UHS-II SD card slots, becoming the first Z-mount camera to do so. Which is somewhat peculiar, since many professionals wouldn't switch to the top-of-the-range Nikon Z7 because they require dual cards – making it unusual for the entry level model to be the only one that has them.

The Nikon Z5 is a smaller and lighter camera, too, at 134 x 100.5 x 69.5mm and 680g. While the controls are identical to the admittedly minimalistic array on its bigger brothers, the most obvious omission is that there’s no top OLED display, the exposure mode dial having moved over to fill its place.

The rear tilting touchscreen LCD is of a lower resolution, with a million dots, rather than the 2.3 million of the cameras higher up the range. The maximum burst rate is also lower, from the blisteringly fast 12fps of the Z6 to 4.5fps. And while The camera can still shoot 4K video, but this time it’s cropped by a factor of 1.7x.

The lower-specced features make the Nikon Z5 in many ways a smaller and more affordable Z6, which the manufacturer hopes will tempt the holdouts still clinging to their DSLRs as well as the smartphone shooters looking to graduate to a 'proper camera' – particularly with the new and nifty Nikon Z 24-50mm f/4-6.3 kit lens.

The Nikon Z5 goes on sale in August.

Pre-order the Nikon Z5 at Adorama (US)