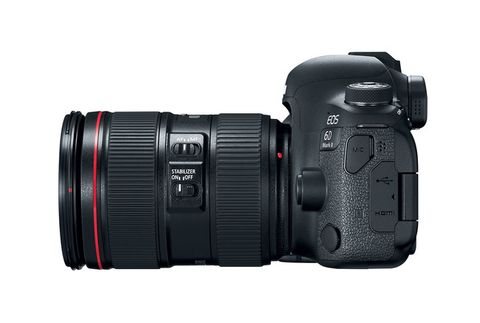 The EOS 6D Mark II is a major step forward from the original 6D, but more in operational speed and performance than outright image quality. It’s a terrific camera to use, but its price puts it up against a number of strong cameras. It’s a really good all-rounder, which would make a great ‘first’ full-frame DSLR.

UPDATED 21/11/2018: The original Canon EOS 6D, introduced all the way back in 2012, was an affordable entry point to full-frame photography. However, it has started showing its age and fans have been clamouring for a replacement for a while.

Its new iteration, the long-awaited EOS 6D Mark II, is an improvement over its predecessor in practically every way, from its sensor and its ISO range, to its upgraded autofocus system and continuous shooting mode.

Not surprisingly, however, it’s also considerably more expensive than the model it replaces. So the question is whether these multiple improvements justify the price hike. It also puts the EOS 6D Mark II up against some noticeably tougher competition, though this almost certainly the best Canon camera for enthusiasts who want to step up to full frame photography.

1. The 6D II is scarcely larger than an enthusiast level APS-C DSLR, but packs in a lot of smart features.

3. There’s only one SD card slot, where rival cameras in this price bracket have two. The 6D II doesn’t shoot 4K video, either.

4. The rounded contours and efficient button layout make the 6D II a great camera to use.

The EOS 6D Mark II’s brand-new 26.2-megapixel sensor is a significant improvement in resolution on the old model’s 20.2 megapixels, and more in line with rival cameras from Nikon and Sony.

The 6D Mark II’s regular autofocus system gets an update too, with a 45-point array (all cross-type) that’s light years ahead of the old model’s archaic nine-point system, and Canon’s latest DIGIC 7 image processor aids object recognition and focus tracking to predict subject movement across the frame.

The new sensor and DIGIC 7 combination delivers an ISO range of 100-40,000, expandable to 50-104,400. The original EOS 6D was actually a pretty good low-light performer, but the new model delivers both higher ISOs and higher resolution.

Action fans get a higher frame rate, too. The EOS 6D Mark II can shoot at 6.5 frames per second, which is almost 50% faster than the 4.5fps of the old model. Its buffer can capture up to 150 JPEGs or 21 RAW files, which is adequate but not enough to make the 6D Mark II the sports specialist some might like.

Canon has decided not to include 4K video, presumably to preserve some differentiation between the 6D II and its more expensive models like the EOS 5D Mark IV. It does offer Full HD video at up to 60fps, however, and adds in-camera five-axis digital stabilisation for movies – the first time it’s been used on a full-frame model. Canon does not have a physical sensor-shift system like those used in Olympus and Sony mirrorless models, but this is probably the next best thing.

Externally, the EOS 6D Mark II looks a lot like the original 6D, but round the back, the 6D’s fixed LCD display has been replaced by a fully-articulating touchscreen, which should make the 6D Mark II much easier to use for video, macro photography and other work where you’re having to compose shots at awkward angles.

Like the original 6D, the 6D Mark II has GPS location tracking built in. You get built-in Wi-Fi too, and both NFC and Bluetooth.

So even though the price increase is pretty substantial, the EOS 6D Mark II also brings some pretty substantial improvements. It’s more of a stretch for cash-strapped enthusiasts, but also a much more modern and capable camera.