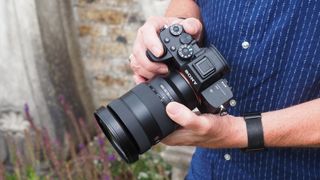 Sony has become one of the biggest camera makers in the market following the launch of its full frame mirrorless cameras in 2013, but 2018 saw some serious competition from Canon, Nikon and Panasonic. What would Sony do in 2019 to fight back?

Sony kicks off the New Year with a firmware announcement. OK, so it’s not the most exciting thing ever, but the Sony A9 Version 5 firmware update brings Real-Time Tracking, Real-Time Eye AF and sundry other AF improvements. But there was a new camera too! The Sony A6400 is coming!

We also got the scoop on the possible new Sony A7000 that Sony could possibly be considering for launch, possibly this year, and gave detailed specifications of the camera Sony possibly ought to make. That didn’t go well, by the way.

February brought the first signs of life for Sony’s APS-C format mirrorless cameras for quite a while. Our Sony A6400 review concluded it was a handy modern vlogging camera but in a five-year-old body that was showing its age. Harsh? Maybe. Anyway, it was new.

Meanwhile, it was hard not to show a flicker of interest at Sony’s new CFexpress card and its bus-melting™ 1700MB/s transfer speed.

Back in Sony’s full frame heartland, the new Tamron 17-28mm f/2.8 looked like an interesting and affordable alternative to Sony’s own ultra-wide zoom lenses.

Sony had stayed pretty quiet during all the full frame mirrorless launches from its rivals in 2018, so we tracked Sony down at The Photography Show and asked, “After the Nikon Z, EOS R and Panasonic Lumix S, should Sony be worried…?”

March looked like being a pretty thin month for Sony fans, but then Samyang announced the new Samyang AF 85mm f/1.4 FE. “So what?” (We think we hear you say) “The world is full of 85mm f/1.4s!” Yes, but this one costs one-third the price of the Sony G Master version.

We also heard that the Zenitar 0.95/50 ultra-fast prime lens was finally available in the Sony FE mount after a three-year wait. (We think we’ve found it on eBay from a Moscow seller, but nowhere else yet.)

But then Sony announces the RX0 Mark II, an update to its RX0 action cam and this time with a flip up selfie/vlogging screen and internal 4K recording.

We also hear that Sony’s camera tech may finally start appearing in Xperia phones, as these previously separate divisions within the company come under the same umbrella during a bit of corporate restructuring.

And just to show that Sony continues to develop its existing cameras and not just launch new ones, there was a Version 3.0 firmware update for the A7 III and A7R III models which brought animal eye AF, Real-Time eye AF and new interval timer modes.

Our phone and video expert Basil Kronfli got the chance of a Sony Xperia 1 hands on review, but it would be another two months before we got a full review sample. In the meantime Sony takes Nikon’s number two spot in the interchangeable lens camera market.

And now, here’s a thing. Why doesn’t Sony, with all its optical expertise and industrial might, make a 21mm f/1.4 FE mount lens? Instead, it’s down to a legendary boutique brand from the past to do the job, with the Voigtländer Nokton 21mm F1.4. Come on, Sony, catch up!

Samyang adds an extra rebuke, with the Samyang (Rokinon in the US) AF 45mm F1.8 FE. And just in case you’re getting fed up that all your Sony lenses have autofocus and aren’t made of brass, there’s the Lomography Petzval 55mm f/1.7 MKII, which doesn’t, and is.

Finally, in a busy month for independent lens makers, Viltrox announces a low-cost 85mm f/1.8 STM for Sony’s full frame mirrorless cameras. Viltrox is perhaps better known for its photographic accessories, but this is not its first lens – it launched a manual focus 85mm lens for the Sony FE mount in October 2018.

Just in case we were in danger of forgetting, Sony also makes camera phones, and in June we published a full Sony Xperia 1 review. Is it good? Yes. Is it the best camera phone you can buy? Not really, though it’s good for video.

At the other end of the size scale, Sony announced its new FE 600mm F4 GM OSS pro sports lens. Just what the doctor ordered for Sony’s high-end pro ambitions. All it needs now is a new version of the Sony A9 (are we psychic or what?).

Too expensive and specialised? Then you might want to take a look at the also new FE 200-600mm F5.6-6.3 G OSS super-telephoto, which is a bit more reasonably priced.

Hurrah, the new Sony RX100 VII is announced! A tiny camera packed with many of the technologies in the Sony A9 (it says here), it’s also EXPENSIVE. The really big news, though, is the announcement of the ground-breaking 61MP Sony A7R Mark IV, a full frame mirrorless camera that out-resolves anything else on the market in that category and a big step forward in Sony’s high-resolution ‘R’ range..

We also learn that Sony is just 1% behind Canon for mirrorless market share. Canon clearly won’t take this lying down, and rumors emerge of a new Canon EOS R with resolution ‘way beyond’ the 61MP of the just-announced Sony A7R Mark IV.

Sony is the world’s largest sensor maker, however, and this month news emerges of six new Sony full frame sensors, including an 8K sensor that can capture 6K at 60fps. But there’s a big difference between the tech that’s possible and making commercially successful products from it, and we learn that Sony (and Canon and Nikon) won’t go 8K until 2021.

Sony sells sensors to lots of companies and doesn’t just put them in its own cameras. We also hear that there may be a 61MP Nikon Z 8 in the pipeline!

Thankfully, there are some everyday products to keep our feet on the ground, including handy and affordable Sony FE 35mm F1.8 that’s been long rumored but is now real.

And (hold on to your seats), Sony launches the world’s fastest card reader and USB hub.

But then a price increase for the Sony FE 135mm f/1.8 GM led to speculation that a US-China trade war could bump up prices for camera kit. Sony also got sniffy about continued questions about the size of its lens mount, and how rival makers were producing super-fast f/1.2 lenses. Sony hit back saying it could make f/1.2 lenses if it wanted to but they should be small and affordable (not a dig at Canon, then).

We learned that the Sony A7S Mark III is confirmed and in development, from a senior Sony executive in an interview.

We got our hands on the Sony RX100 Mark VII for a full review. It’s powerful, pocket-sized but pricey, and we were left wondering who this pint-sized powerhouse was aimed at.

Speaking of price, Sony’s policy of keeping older cameras on sale at steadily falling prices is good news for bargain hunters but makes for some pretty tricky decisions, so we wrote Sony A7R IV vs A7R III vs A7R II: pixels vs price, and how to choose the right model.

Our roving reporter Jamie Carter grabbed a quick Sony A6100 hands on and came away coolly positive, and then got to try the Sony A6600 and was more impressed by its headphone socket, longer-lasting battery and in-body stabilization.

Meanwhile, the Sony A9 II will DEFINITELY be announced in October, we heard.

This is the month that Chinese company Viltrox announces three new AF prime lenses for the Sony E mount. They are 23mm, 33mm and 56mm f/1.4 primes, but we don’t know of anyone selling them yet.

September also brought the news that tripod maker Sirui was introducing a Sony mount Sirui 85mm f/1.4 with a 50mm f/1.8 anamorphic lens to come. Which was a bit random.

This is when we actually got to do a proper Sony A7R Mark IV review to find out if its lab scores were as dramatic as its 61MP resolution. At the same time we took another look at the Sony A7, Sony’s first full frame mirrorless camera, which first came out about a hundred years ago – OK, in 2013 – but it’s still on sale, still being made, and still getting cheaper and cheaper and CHEAPER. So we published a Sony A7 re-review from a 2019 perspective and gave it 5 STARS. We didn’t stop there. We took a fresh look at the Sony A6000 too and found it pretty good even by today’s standards. AND CHEAP.

We also got to review the Sony Xperia 5 camera phone, which is like a smaller version of the Xperia 1. The verdict? Nice, especially for video, but pricey.

This was the month that the new Sony A9 Mark II finally broke cover. Was it what everyone was expecting? Er, not exactly.

It’s the camera sports pros were waiting for, and we finally got a chance to publish our Sony A9 Mark II review. Some folk were disappointed it wasn’t a seismic upgrade, but cooler-headed pros were quick to appreciate its long list of rather well thought out advances.

Continuing our re-review theme, we took a fresh look at the late-2014 Sony A7 Mark II, which is now almost down to Sony A7 prices, but with the benefit of in-body image stabilization. It’s not cutting edge by today’s standards, but boy, does it give you a lot for your money. Almost as much as the Sony A7R Mark II. Yes, the autofocus is old hat, but this is 42.4 million pixels for not much more than $1,000/£1,000!

What was the best-selling camera on Black Friday/Cyber Monday? Yes – a Sony! But maybe not the one you (or we) thought. And in a bit of an upset for Sony, we heard the Sigma fp outsold Sony, Canon and Nikon in two major Japanese camera stores.

This is the month we gave the mighty Sony FE 200-600mm f/5.6-6.3 G OSS a five star review, and Sony beat Canon and Nikon for full frame mirrorless camera sales.

More Sony A7S Mark III rumors: it’s been spotted in the wild, allegedly, with a much thicker body than its predecessor, which COULD tie in with previous rumors about 120p 4K video, because any such processing power would need industrial-strength cooling. We’ve already seen how the cooling system on the new video-centric Panasonic Lumix S1H has produced a much thicker body.

We’re not quite sure what to expect from Sony in 2020, but if it’s anything like 2019 it’s going to be a pretty wild ride. Here’s our list of the best Sony cameras right now… but they’re just the ones we know about! We also list what we think are the best Sony lenses to buy, but this is just a selection of our faves. There’s a lot more out there, and a lot more to come. Stay tuned!