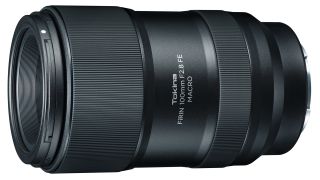 Sony shooters seeking a new option for portraits and macro now have a new option, with the announcement of the Tokina FiRIN 100mm F2.8 FE Macro (or "FíRIN", as the company lists it) for Sony E-mount cameras.

Its real strengths, though, lie in its macro capabilities. It reaches 1:1 life-size reproduction with a working distance of 114.3mm / 4.5 inches between the subject and the front of the lens.

Shown originally at Photokina last year, the lens comprises of nine elements in eight groups, the FiRIN's 'flat-field' optics have been engineered to eradicate field of view curvature, delivering superior edge-to-edge sharpness across the focal and aperture ranges.

It has also been constructed to make maximum use of the powerful macro aids in Sony cameras such as focus peaking, auto image enlargement, electronic distance bar, manual focus assist and image stabilization.

Tokina is also confident enough to claim "perfectly controlled chromatic aberration, flare and ghosting" thanks to the optic's multi-coatings, which render images with a natural color and "extremely low" light falloff.

The lens boasts a large manual focus ring when you want to take over from its autofocus ability, with the extending barrel taking the lens length from 123 to 163mm. It weighs in at 589.7g / 1.3 lbs, with a 55mm filter size.

The word Fírin is apparently a variation of Fírinne, the gaelic word for "truth". Tokina explains this 'represents a promise from Tokina to photographers to help them capture the truth in their images'.

The Tokina FiRIN 100mm F2.8 FE Macro will be available from 26 April at a cost of $599 / £579 and should provide an all-in-one solution for both portrait photographers and macro shooters.