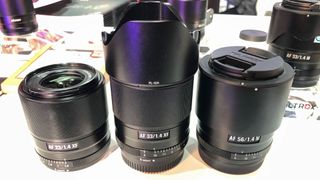 Viltrox is to introduce three new prime lenses later this year. All three will be designed for APS-C sensored cameras, and will be available in Canon EOS EF-M, Fujifilm XF, and Sony E mounts (such as the best-selling Sony A6000).

Shown for the first time at IBC 2019, the three lenses will have focal lengths of 56mm, 33mm, and 23mm – and all of them will share the same fast f/1.4 maximum aperture with a nine-bladed iris.

The widest of the three new autofocus lenses is the 23mm - which offers an equivalent focal length of a 35mm when used on an APS-C mirrorless camera.

The lens is constructed from 11 elements in ten groups, including two ED lenses, and it benefits from an HD Nano multilayer protective coating on the front element. Weighing 260g, it measures 65x72mm, and has a minimum focus distance of 0.3m with a 52mm filter ring.

As with all three lenses, the 23mm has a metal structure, and  offers a wide manual focus ring and internal focusing, along with a noiseless STM motor to power the autofocus.

The 33mm gives an effective focal length of around 50mm, due to the crop factor an APS-C sensor

The lens is constructed from ten elements in nine groups, with one ED element; it also gets the HD Nano multilayer coating.

The lens goes on sale in December for around $250.

The 56mm f/1.4 gives an effective focal length of 85mm, making it an ideal choice for portraits with an APS-C mirrorless camera.

The lens is constructed from ten elements in nine groups, with one ED elementand the HD Nano coating.

As with the other three lenses, the 56mm will be available in December, and will also cost around $250.

Viltrox lenses are available from Adorama, Amazon and B&H in the States, and through Amazon.co.uk and  Kamera Express  in Europe.

The best Fujifilm lenses in 2019