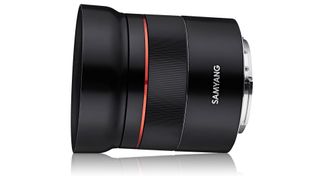 Independent lens maker Samyang (branded Rokinon in the US) is carving a solid reputation for reliable low-cost lenses, and the new Samyang AF 45mm F1.8 FE is an extremely affordable general purpose lens for cameras like the Sony A7 III and A7R III.

Not only that, it’s light too (just 162g), compact and much more affordable than Sony’s own prime lenses, especially the G Master series – some of the best Sony lenses are also some of the biggest!

With a focal length of 45mm, the Samyang AF 45mm F1.8 FE is close to the classic all-purpose 50mm focal length, which is reckoned to offer the closest thing to the human eye’s natural angle of view. Samyang says it’s particularly well suited to travel, thanks to its small size and weight, and it has a minimum focus distance of 0.45m, so it should be good for moderate close-up shots too.

One of the key features for Sony owners will be that this is an autofocus lens. Many third-party prime lenses are manual focus only, but Samyang has steadily been stepping up its autofocus lens range to compete head-on with Sony’s own lenses.

• Choosing the best Sony camera: from point and shoot Cyber-shots to high-end Alphas
• Which is the best mirrorless camera? We help you choose