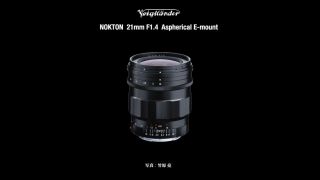 Following its concept teaser at CP+ earlier this year, Voigtländer has now officially taken the wraps off the Nokton 21mm F1.4 Aspherical lens for Sony E-mount. A wide-angle, wide-aperture lens that promises Sony photographers a great deal of creative expression, the Voigtländer Nokton 21mm F1.4 Aspherical lens uses a floating design that, according to its makers, should ensure top-notch image quality at all focusing distances. Its minimum focus is a pleasingly tight 25cm.

Built-in electronic contacts specifically for Sony E-mount allow the lens to communicate with the camera, enabling the transfer of EXIF data and also allowing it to support in-body 5-axis image stabilisation.

The optical design incorporates 13 elements in 11 groups, and has been optimised specifically for the full-frame sensors of Sony’s Alpha 7 cameras.

It’s manual-focus only, and has a 12-bladed diaphragm for the creation of smooth bokeh. The aperture-changing mechanism is also clickless and silent, making the lens a good choice for movie recording as well as stills. The lens weighs 560g and carries a filter thread of 62 mm

8 bizarre lenses you can use with DSLRs and mirrorless cameras