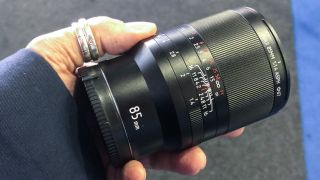 Sirui is probably best known for its tripods, but the Chinese accessory specialists will now be producing lenses. Shown at the IBC 2019 trade show in Amsterdam, the first two primes are an 85mm f/1.4 and a 50mm f/1.8 anamorphic lens.

The Sirui 85mm f/1.4 ASPH lens is designed exclusively for the E-mount range of Sony mirrorless cameras. The manual focus lens will go on sale in January and is expected to retail for $400.

The full-frame lens has 11 aperture blades and is said to offer optimum bokeh effects. The lens weights 580g and measures 94.1x70.6mm. It is constructed from 10 elements in 8 groups, and has a minimum focusing distance of 0.68m. It has a 67mm filter thread

The 50mm f/1.8 Anamorphic lens is specifically designed for shooting video with cameras with crop sensors - and will be available in Sony E-mount (APS-C format), Fujifilm X-mount and Micro Four Thirds mount.

Anamorphic lenses are commonplace in the cinema world - squeezing the image in sideways to allow a widescreen view to be shot with a conventionally shaped sensor. The Sirui lens increases your field of view by up to 33%, giving an angle of view that is equivalent to an APS-C 37.5mm lens. This allows you to shoot high-definition video in a classic CinemaScope aspect ratio of 2.4:1.

The manual focus lens is constructed with 11 elements in 8 groups, with ten aperture blades. It weighs around 560g and measures 68.2x61.7mmm. It has a minimum focusing distance of 0.85m

The 50mm anamorphic lens will also go on sale in January, and is expected to sell for $700.