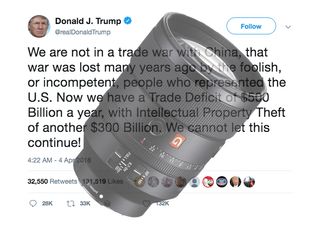 In an unwelcome move for Sony fans, the Sony FE 135mm f/1.8 GM lens has had a $200 price increase from $1,898 to $2,098. But is this a one-off occurrence related to a singular Chinese-produced Sony lens, or is it a far more troubling sign of things to come?

Rumor website Sony Alpha Rumors comments that "this is the first time I've ever seen something like this from Sony" and questions whether this price hike could actually be due to the US-China trade war. Could this be the case? Well, let's find out.

On March 22, 2018, President Trump signed a memorandum instructing the USTR (United States Trade Representative) to apply tariffs of $50 billion on Chinese goods, stating that this was due to Chinese theft of US intellectual property. China then retaliated with their own plans to implement tariffs on 128 US products.

What's occurred since then has essentially been a tit-for-tat that leaves us in August 2019 with China having ordered all state-owned enterprises to stop buying $20 billion worth of US agricultural products, and the US having announced that $250 billion worth of Chinese products will be subject to a tariff.

Now this is all suitably terrifying in its own right, but how does it affect the camera industry?

In late 2018 Olympus announced that it would be moving its digital camera and lens production from Shenzhen, China to Vietnam. Around the same time, GoPro also announced that it would be moving most of its US-bound production out of China by summer 2019, with GoPro chief financial officer Brian McGee commenting, "today's geopolitical business environment requires agility. We're proactively addressing tariff concerns."

Sony itself recently moved its smartphone factory from China to Thailand (although it claimed that this a cost-cutting measure and not related to US-China trade tensions). Meanwhile, Sony Director Hiroki Tokoti has warned that US retail prices of PlayStation consoles could be affected by US tariffs.

With US-China trade tension clearly already a conversation at Sony headquarters, and digital cameras included on the official tariff list from the Office of the Federal Register (US), we can't see any reason why Sony wouldn't already be trying to troubleshoot this geopolitical obstacle for their imaging business.

So if it looks as if US tariffs on Chinese consumer goods are going to affect the prices of cameras and lenses, why have we really only seen one lone Sony lens be subject to a price hike so far?

Well, just because a tariff has been imposed on a product, it doesn't necessarily mean that this additional cost will be passed onto the consumer. Some companies may decide to absorb the expense themselves rather than risk driving customers away with a price increase. This may be why, despite this trade war escalating for over a year now, we haven't seen much effect on the cost of camera and camera-related products.

So why would Sony suddenly be adjusting their prices now? Well unfortunately, come September 1, the US will be hitting China with a 10% tariff on an additional $111 billion worth of apparel, sporting goods, watches and electronics. Then, in December, there will be a tariff on a further $156 billion worth of Chinese produced products put into action.

With these impending tariffs looming, and with no end to this geopolitical squabble in sight, could it be possible that Sony simply wants to gauge public reaction before committing to more price increases? Or maybe this is just the first in a long line of planned price hikes on Sony's Chinese-produced products?

Meanwhile, with Canon, Panasonic, Benro and more photographic product manufacturers all appearing to produce goods in China, we can't help but wonder whether photography is about to become a significantly more expensive hobby and profession.

No matter how you look at the situation, two things seem certain. The US and China seem caught in a race to the economic bottom – and the camera industry is along for the ride.

Google’s Huawei blacklisting: How will this affect Honor smartphones?
Best Sony A9 deals in August
Best Sony lenses in 2019: find the right one for your camera