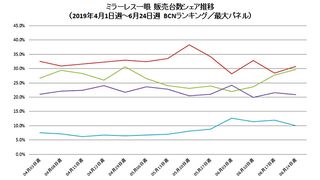 Sony is tantalizingly close to stealing Canon's top slot for mirrorless cameras in Japan, as there is now just 1% difference between the two companies in terms of market share.

The market is currently ruled by four principal players:

That's according to the latest BCN Ranking report for June 2019 (via Digital Camera Info), the Japanese point of sale database that aggregates sales in the territory.

While the camera industry as a whole continues to decline, the mirrorless sector (at least in Japan) is holding firm, with overall sales at 98% year-on-year. Sony, however, actually managed double digit growth, reaching 117% compared to 2018.

The report continues to paint an intriguing picture of Japan's mirrorless market, which is starting to supersede the traditional DSLR market in terms of importance. It's also a fascinating insight as to where consumer interest truly lies.

Tellingly, not only is Nikon virtually non-existent in the rankings, but so are products like the Canon EOS R and Canon EOS RP. In fact, the only full-frame mirrorless camera in the top ten is the Sony A7 III – Sony's most junior full-frame offering.

Instead, the top ten camera sales comprise mid-range and entry level products like the Canon EOS M50, Sony A6400 and the Olympus PEN E-PL9… along with its predecessor, from 2016!

So for all the naysayers who wonder why Canon is keeping its EOS M series alive, or those who wonder why Olympus seems so much more apt to refresh its PEN line than concentrate on new OM-D models, this is why!