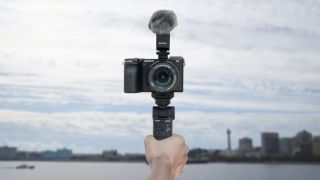 The Sony A6600 is the new flagship, shown here mounted on a Sony GP-VPT2BT grip. (Image credit: Sony)

The Sony A6000 series cameras have been best-sellers for Sony, but with the launch of the new Sony A6100 and A6600 models in 2019, Sony now has six APS-C mirrorless cameras on the market. How come? And how are you supposed to work out which one to buy?

It's all part of Sony's marketing strategy. It continually launches new versions of cameras, but keeps the old ones on sale at steadily decreasing prices. So even though the Sony A6000 is the oldest, it's also the cheapest and, therefore, we reckon one of the best cameras for beginners. The Sony A6400, meanwhile, is not the newest model, or the most advanced, but we think its price and features combined make it one of the best cameras for vlogging.

Sony likes to design a camera and then release version updates while retaining the same basic form factor. So while the original Sony A6000 dates back all the way to 2014, the latest A6400 and A6100 models look scarcely any different, and the new A6600 is just a bit thicker in the body.

We've included the A6000 and the A6400 in our list of the best Sony cameras, but for different reasons. As soon as we review the new models we'll decide whether these deserve to be in the list too – or even amongst the best mirrorless cameras you can buy right now

We thought it might soon become five. The A6300 is getting harder to find, and it was something of a stopgap model before the launch of the A6500 anyway, but there are still a few around. We also hope the A6500 carries on because it has a much bigger buffer capacity for continuous shooting than any of the others – including its ‘replacement’, the A6600.

So let’s take a look at each of these cameras in turn, its history and its suitability for different kinds of photography and video.

It’s the cheapest, it’s the oldest, and it's a real bargain for stills

The A6000 has the same 24-megapixel resolution as later models and essentially the same physical design. The viewfinder resolution is lower and it only shoots 1080 video not 4K, but for stills photographers that won’t be an issue. The autofocus system is more primitive by Sony’s standards but still stacks up well against systems from rival brands, even today. If you just want a stills camera, this will do the job as well as all the others that have come since, and for a lot less money. Later cameras have better processors and better high-ISO image quality, and the A6500 has a much better burst depth. And if you want in-body image stabilization, you need either the A6500 or A6600. Otherwise, the A6000 still has what it takes.

The A6300 brought 4K video and log modes, but could soon disappear

The Sony A6300 was a big step forward at the time, bringing 4K video with Sony’s S-Log2, S-Log3 modes, so it was a proper 4K filmmaking tool right from day one. The A6300 also came with a more sophisticated AF system with 425 phase detection AF points and a higher resolution EVF. Still with no in-body image stabilisation, however, and an inexplicably weaker buffer capacity than the A6000, it still didn’t tick all the boxes. In just a few months, Sony launched the much more powerful A6500, and while the A6300 looks like it might be the first of Sony’s A6000-series cameras to disappear from the dealers’ shelves, there are still quite a few around.

Superseded by the A6600 but still better for burst shooting

The Sony A6500 is a real powerhouse. It arrived just eight months after the A6300 and completely crushed it for specs. The A6500 has the same AF system as the A6300 (425 phase detection AF points, 169 contrast AF points), the same 2.36m dot EVF, the same 4K video features and log modes – but added in-body stabilization for the first time in an A6000-series camera and a massive 233 JPEG 107 RAW buffer capacity more than twice as good as any other A6000-series camera before or since. If you want a great stills-video all-rounder which is particularly well adapted to action photography, the A6500 is still a great buy. It's not that easy to find these days, though, and when you do you'll discover it's holding its price a bit too well!

Perfect for vlogging, the A6400 brings ultra-fast AF and a flip screen

This can be seen as a successor to the A6300, mostly because it falls in the middle of the ‘new’ range just like the A6300 did with the ‘old’ range. The A6400 is designed specifically for bloggers, vloggers and content creators, with a 180-degree flip-up screen so that you can grab selfies or – more important film yourself presenting to the camera. It also has Sony’s new-generation AF system, with a claimed 0.2sec AF acquisition speed, 425 phase detection AF points, 425 contrast AF points and clever Eye AF. Video is captured at 4K and with Sony’s S-Log2 and S-Log3 log modes, but also with the new HLG (Hybrid Log Gamma) option. It’s not especially cheap, but the A6400 is an ideal vlogging camera and less expensive than the A6500 and A6600.

Its the new entry-level Sony, technically, but too pricey we think

This can be seen as the entry-level replacement for the ageing A6000, but right now it costs a lot more. The key differences are its 180-degree flip-screen, 4K video capability (but without log modes) and Sony's up to date AF system with a claimed 0.02sec response time. The improved BIONZ processor brings a higher maximum ISO setting, but otherwise these cameras are remarkably similar. The A6100 still has the rather low-res EVF used in the A6000 and the same cramped feeling 3-inch 922k dot ‘wide’ rear screen used across all of these A6000-series cameras. Frankly, if your main interest is stills photography, the A6100 doesn’t bring much that the A6000 doesn’t do pretty well already. If you're more interested in video, while the A6100 is better, but the A6400 is better still. To our way of thinking, the A6100 falls in the middle – it's neither cheap enough nor advanced enough to be truly appealing.

It’s a 4K powerhouse, but the A6500 still wins for buffer capacity

See all prices (10 found)
In-body stabilization
Continuous Eye AF for movies
Bigger battery capacity
No 4K 60p yet?
Average buffer for continuous shooting
Why does it cost so much?

Sony’s new flagship A6600 technically supplants the A6500, but goes in a slightly different direction. Like the A6500 it incorporates in-body image stabilization. It’s not just this that makes the body slightly fatter, but the inclusion of a new FZ100 battery that doubles the battery life compared to the others. The A6600 is especially good at video, offering the same 4K capture and log modes as its stablemates, but adding a headphone socket for monitoring audio levels and continuous Eye AF and Animal Eye AF while shooting video (the others don’t). HOWEVER, the A6600 does not match the prodigious buffer capacity of the A6500. If you want a camera for high-speed continuous sports photography, the A6500 is the better option. With the A6600, Sony appears to have gone all-out for video.