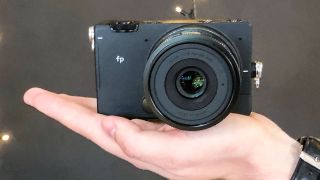 The Sigma fp, the world's smallest full-frame mirrorless camera, has proved to be a very big hit in Japan, outselling Sony, Canon and Nikon at two of the country's biggest camera retailers.

At Yodobashi – a major national electronics retailer with a huge presence in camera sales – the fp became the first camera to outsell the Sony A7 III in two and a half months (thanks, Capa Camera Web). It held two spots on the top ten rankings, at number one with the Sigma 45mm f/2.8 lens and at number ten body only.

Things were even more impressive at MapCamera, where it was October's best-selling camera overall – putting it above such heavy hitters as the Canon EOS R, Canon EOS RP, Nikon Z6, Nikon D850 and Sony RX100 VII.

The Sigma fp's performance in outselling so many bigger and better established cameras is made more noteworthy given the economic climate in Japan, as October was the first month after the country's consumption tax increase, which resulted in a hesitancy for consumers to purchase.

In fact, there weren't a lot of pre-orders for the Sigma fp – it wasn't until customers could actually handle the camera in-store that interest began to surge.

"There were not many reservations for this camera before its release," wrote the retailer. "However, as soon as it was launched and you could try out the actual machine at the store, the popularity soared!"

It is definitely a camera that is harder to appreciate without seeing in person, but when it's in your hands you really do start lusting after it. Check out our hands-on Sigma fp review for our impressions.