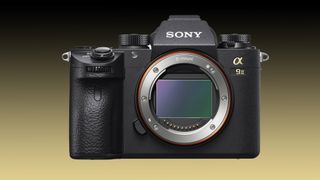 UPDATE: Sony Alpha rumors has posted a new story claiming that "Sony will DEFINITELY announce the new Sony A9II in early October". The site was less bullish on the previously posited sensor, claiming a "60% chance the A9II has a new 36 Megapixel sensor".

ORIGINAL STORY: Sony is on quite a roll of late, with the newly announced Sony A6100 and Sony A6600 revitalizing its APS-C line-up, with the recently revealed (if still currently unavailable) Sony A7R IV upping the ante in the full-frame mirrorless market.

The next full-frame Sony E-mount camera due an update should really be the aging A7S II, which has been around for four years. However, according to Sony Alpha Rumors, it may actually be the A9 that's about to be replaced.

A reliable source has stated that the A9 II could be announced in 1-2 weeks, which would coincide with the IBC 2019 show in Amsterdam – the same event where the A7S II was announced in 2015. In fact, on the first day of IBC2019 (13 September) Sony Alpha Rumors also reports that Sony has scheduled a live-stream event, presumably for the launch of a new product.

As yet little else is known about what the Sony A9 II will offer, though Sony Alpha Rumors' source claims that the new camera will pack a 33-36MP full-frame stacked CMOS sensor and "mind-blowing specs" in readiness for the 2020 Olympics. With Nikon's new flagship DSLR, the Nikon D6, in the works, the time could well be right for Sony to steal some of Nikon's thunder with its own new halo camera.

All this could mean good news for E-mount fans wanting to upgrade to the original A9. With Sony A9 prices now matching (and even slightly undercutting) the pre-release A7R IV, Sony could well continue its tradition of selling its older cameras at discounted rates.