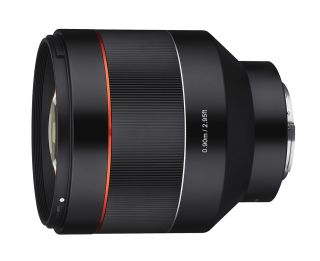 Samyang is unveiling its sixth autofocus prime lens for the Sony E-mount - as used on Sony Alpha mirrorless cameras such as the A7 III and the A6500. The lens is being launched at The Photography Show, which runs from 16-19 March.

With its wide maximum aperture of f/1.4, the 85mm telephoto is of particular use for portrait and wedding photographers looking for bokeh-blurred backgrounds created by the very limited depth of field that can be achieved with this lens.

As is usual, the lens will sold under the Rokinon brand in North America.

The Samyang AF 85mm f/1.4 FE is made of 11 optical elements in 8 groups - and four of these elements are HR (high-resolution) glass, whilst one uses ED (extra-low dispersion) glass. The lens has nine diaphragm blades. It has weather sealing to protect it from the elements.

This full-frame lens is designed primarily for use on full-frame models in, but can also be used on APS-C models where the effective focal length becomes 127.5mm.

The lens benefits from autofocus that uses a Dual Linear Sonic Motor (DLSM), and has a minimum focusing distance of 0.9m.

The lens is the latest of a series of releases by Samyang in its Spring Collection. The first of this collection of eight lenses was the Samyang XP 10mm f/3.5, this was followed by Samyang's first lenses for the Canon RF full-frame mirrorless mount, the MF 85mm f/1.4 RF and MF 14mm f/2.8 RF manual focus primes.