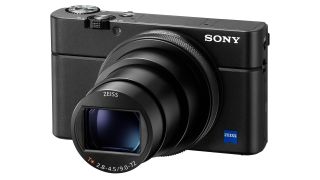 The Sony RX100 family is a pocket-sized camera best suited to travel and family photography, you’d have thought, but with each generation Sony is packing more and more power into this tiny compact.

The brand new RX100 VII now boasts many of the technologies featured in Sony’s professional A9 mirrorless camera, one of the best mirrorless cameras you can get. These two cameras are completely different, of course, and aimed at different markets, but with its 357-point focal-plane phase-detection AF/425-point contrast-detection AF system and viewfinder blackout-free burst shooting at up to 20 frames per second with autofocus and auto-exposure, the RX100 VII does boast the power of a professional sports camera.

That’s not the Sony’s only trick. It also has a ’Single Burst Shooting’ mode that captures 7 images with a single shutter press, at 30fps, 60fps or 90fps. It’s like taking a single shot but being able to choose the best from 7 different versions captured a split second apart.

Sony says a newly-optimised lens control offers the world’s fastest 0.02sec autofocus speed, and the RX100 VII also inherits Sony’s latest Real-time Tracking and Real-time Eye AF for both humans and animals – and for the first time in a compact camera.

The RX100 VII uses the same 1-inch sensor size as previous versions, with the same 20.1-megapixel resolution. Sony says, nevertheless, that the sensor is a newly-developed ‘stacked’ sensor design with inbuilt DRAM chip and it’s this, combined with Sony’s latest BIONZ X processor, that gives the RX100 VII its remarkable power and performance.

For vloggers not snappers

But who needs a compact camera with this much power – and at this price?

Sony is clearly aiming the RX100 VII at a new generation of content creator, not just the average stills photographer. The Sony’s speed and performance is aimed not just at capturing split-second moments, but professional-quality video too.

For a start, it can capture 4K video with full pixel readout and no pixel binning in order to achieve maximum sharpness, with the same Real-time Tracking and Real-time Eye AF available in the still photography mode. Sony’s 4K Active SteadyShot system provides video stabilisation, and with an Interval Shooting modes and Super Slow Motion mode at up to 1,000fps, the RX100 VII can dramatically speed up and slow down time too.

Pro videographers will appreciate the Hybrid Log-Gamma (HDR) / S-Gamut3.Cine / S-Log3, S-Gamut3 / S-Log3 log modes for increased dynamic range for grading on a computer, while vloggers will love the 180-degree flip-screen. This is an essential feature for self-filming, and a must-have on the best cameras for vlogging.

Sony reckons the camera’s small dimensions – just 102mm x 58mm x 43mm and 320g – make it ideal as a lightweight, go-anywhere Camera you can mount in places that larger cameras can’t go, and will be offering a Shooting Grip Kit for Vloggers. This will include an RX100 VII, Shooting Grip (VCT-SGR1), Bracket with Accessory Shoe to attach the Microphone, and two Rechargeable Battery Packs (NP-BX1).

The Sony RX100 VII will cost £1,200 when it arrives on the market in August 2019. That’s a lot of money for a pocket camera, but this one is in a league of its own, and aimed at a fast-growing new audience which needs this kind of power and speed in a small package.

• What are the best compact cameras right now?
• These are the best travel cameras to get today
• The best cameras for vlogging: we pick our favorites