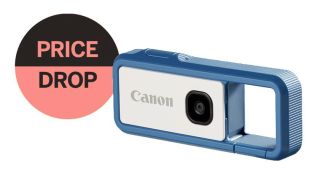 Looking for that perfect holiday deal for your Christmas shopping? The recently released Canon Ivy Rec is a rugged activity camera that can survive any number of knocks, drops and scrapes. Whether you're exploring the great outdoors, or simply want to give your kid a chance to develop their photographic skills, the Canon Ivy Rec is the perfect companion.

Here's one of the most irresistible B&H Black Friday deals on a brilliant and innovative camera, the Canon Ivy Rec – available for the incredible price of just $79.99, an amazing saving of $50 on the regular retail price!

Canon Ivy Rec: $79.99 (was $129.99)
The perfect stocking stuffer and the perfect knockabout outdoor camera! The Canon Ivy Rec has a 13MP sensor for stills and 1080p video at 60fps. Its carabiner doubles as a viewfinder and it even has built-in Wi-Fi and Bluetooth!View Deal

The Canon Ivy Rec is one of the most fun and unusual cameras we've ever seen, and is definitely something you'll want to pick up and fiddle with in person. This weatherproof camera is designed for the knocks and scrapes of outdoors activities – which also makes it perfect for rough-and-tumble kids!

The carabiner enables it to be clipped to your bag or belt, and it also acts as a viewfinder. The Canon Ivy Rec has a 13MP sensor for capturing stills, and it can also record 1080p video at up to 60 frames per second – making it a fantastic take-anywhere, shoot-anything camera!