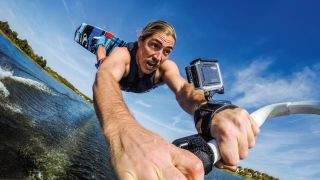 Hardy and well-protected, waterproof cameras allow you to explore fearlessly and capture distinctly memorable images of even underwater subjects. Many will also be shockproof, crushproof and freezeproof, giving you the ultimate in shooting versatility.

So how to choose the best waterproof camera for you? Assuming you're not just looking for the best cheap camera, there are a few questions to answer. Do you want to shoot photos or video, or both? How important is image quality to you, and do you need a fast burst mode to capture moving subjects? How much do you have to spend?

The best waterproof cameras in 2020

When we say "waterproof camera" we can mean a number of things, so it's important to define our terms. There are two main popular types of waterproof camera: waterproof compacts and action cameras. Waterproof compacts tend to resemble an ordinary compact camera, with the main difference being that they're, well, waterproof. They tend to be marked out by distinctive bright colouring (useful if you drop them underwater), and the main edge they have over action cameras is the option of an optical zoom lens, allowing you to get closer to your subjects without suffering loss of picture quality.

Action cameras like GoPros have their advantages too though. They're generally much smaller than waterproof compacts, making them lighter and easier to mount via a chest harness or helmet mount or similar. The best action cameras also tend to have better video specs, offering pristine 4K in high frame rates, which many waterproof compacts currently lack.

We've divided our guide into the best waterproof compacts and the best action cameras, and we've also thrown a disposable film camera in there too, for those who prefer to do things old-school.

We'll keep dedicated dive cases for cameras for another buying guide, since these are for serious dive experts only, but we can show you ten other ways to start your adventures in underwater photography. And we can help with the cost, too – there are lots of cheap camera deals right now, and you'll see today's lowest prices below.

Tough as nails, without the danger of going rusty

The Olympus TG series has a sterling reputation among the tough camera market, not only for being sufficiently specced to handle tough conditions, but also equipped with impressive imaging and video tech. The Raw-shooting, 4K-capable TG-6, is a fairly minor upgrade on the previous TG-5, but adds some nifty new features like improved LCD resolution and a new Underwater Microscope mode for getting in close. Producing 4K video at 30fps and offering the option to shoot Full HD video at 120fps for super-slow-motion, the TG-6 also has a generous 25-100mm optical zoom lens that lets you get closer and closer to the action. It's got a chunky handgrip providing a secure hold on the camera, while the internal zoom mechanism means the lens never protrudes from the body, protecting it from knocks and bumps. Straightforward but sophisticated, the TG-6 is quite simply the best waterproof camera around right now.

With 30m waterproofing, it's a great underwater camera for deeper divers

If you’re a deep-water explorer, this is your pick of the best waterproof digital cameras. The Nikon W300 is rated to depths of 30m, outstripping most waterproof cameras, and it comes with a barometer that provides useful underwater data like altitude and depth, as well as an electronic compass. Bluetooth functionality is also on board, and this pairs well with Nikon’s SnapBridge technology for fast image transfer. Video shooters will also welcome the addition of 4K video to the W300’s toolkit, and the generous shockproof rating of 2.4m means it’s extra protected against bumps and knocks. While the lack of Raw support is a pity, if you're happy to stick with JPEGs you'll find it to be a superb all-rounder for fearless underwater adventures.

One of the toughest available, with nifty extra features and a price to match

This is the Swiss army knife of tough cameras, equipped with ring lights around its lens that function as a torch as well as a macro light, allowing you to see what you're doing underwater as well as keep your subjects illuminated. While it's not a big update over the previous WG-50, it's got a fair few nifty features that make it worth consideration. The microscope mode lets it focus at distances as close as 1mm, while the Handheld Night Snap captures several images of a low-light scene in quick succession and blends them together to create a blur-free composite image. This is all housed in a body with serious protections, able to stay submerged in 14m of water for up to 2 hours.

The FT30 isn't the newest waterproof digital camera here, and doesn't quite offer any best-in-class specs, but what it does offer is commensurate with its very reasonable asking price. It’s also pleasingly slim enough to fit in a snug jeans pocket or similar, although this does come at the cost of a secure grip; you might want to invest in a wrist strap to ensure the FT30 doesn’t get away from you. Provided you keep hold of it, the FT30 is a solid and versatile waterproof camera that should prove well-suited to recording your aquatic adventures – in stills form, anyway. The lower video resolution of 720p means that if you’re a video aficionado, you’re probably better off with one of the other waterproof digital cameras on this list.

The design of the Fujifilm FinePix XP140 is fun and kid-friendly, making it a solid choice for family holidays, but this doesn't mean it skimps on imaging tech. While it's not going to challenge something like the Olympus Tough TG-6, it's a capable little camera in its own right, able to shoot 4K video (albeit at a disappointing 15p) and equipped with an impressive 5x optical zoom lens with an equivalent focal range of 28-140mm, and all this comes at an extremely friendly sub-£200 price tag. A new scene recognition mode helps the XP140 assess for what it's photographing (which goes some of the way towards compensating for a lack of manual controls), and the controls are well laid-out and easy to use, even when in murky underwater conditions. For the price, this is a really solid buy.

We loved the Hero7 Black, but its successor is even better!

The latest flagship GoPro model is our favorite action camera available right now, and it brings some brilliant new features. A key difference from its predecessor (and especially the less expensive Hero7 Black) is that there are fold-out feet, so now you have a camera mount is now built in. That's not all – you can accessorise the Hero8 Black with a new series extras called 'Mods'. We especially like the Display Mod because it adds a second monitor that is perfect for vloggers. There are plenty of other Mods too, including a Media Mod for improving the production value of your videos, and a Light Mod LED light too. These extra capabilities – and the fact it's already waterproof down to 10m without a case – make the Hero8 Black our favorite underwater action cam right now.

The feature-set and price point of the DJI Osmo Action make it pretty obvious from the get-go that it's an attempt to undercut the GoPro HERO7. Does it succeed? Like all things, it's complicated. The front-facing screen is a boon, the stabilisation is just as silky smooth as the HERO's, and it's wallet-friendly price is nothing to sniff at. That's not to say it's perfect; there are a few lag issues at high resolutions, the app can be unreliable, and video from the HERO is a touch flatter, which counts in professional realm when it comes to the grade. For an affordable alternative to the HERO7 Black though, the Osmo Action is a fantastic choice.

Improves on the original by adding internal 4K

While the original Sony RX0 drew plenty of attention for its 1-inch sensor in a tiny body, it was somewhat hamstrung by the fact that to record 4K video it needed to be physically tethered to an external recorder. So while it was waterproof, shockproof and all that jazz, this limitation meant you couldn't record 4K video in these extreme situations. The RX0 II does away with this restriction, recording pristine 4K video internally, and also adds welcome extra features like a flip-out screen. It's the most expensive on this list, but if you need the low-light latitude a 1-inch sensor gives you, it's really an unrivalled prospect.

Read more: 10 tips on getting the best from your Sony camera

Previous generation’s GoPro HERO model is as good as ever, but cheaper

Belonging to a previous generation of GoPro, the HERO5 Black is still a hugely impressive camera, one that can now be picked up for a reduced price with the advent of the HERO7. Like that model it shoots 4K video, albeit at a lower frame rate than the HERO6 or HERO7, and still has the useful 2in touchscreen on its rear. Full HD video can be shot at 120fps for super-slow-motion output, and it’s possible to shoot stills in Raw format, which gives you greater flexibility to tweak them in post-production. This was also the point at which GoPro HERO cameras received dual microphones, improving audio capture. If the HERO7 Black is too dear for you, this waterproof digital camera should more than satisfy your needs.

This disposable film camera is perfect for families on the beach

Yes, it does cost a few pounds more than your usual disposable camera, but you're getting a waterproof camera, for heaven's sake! Fujifilm says its plastic case is water-resistant to a depth of 10m, so it's likely you're going to be in trouble long before the camera is. The Fujifilm Quicksnap Marine comes loaded with 24 exposures of Fujifilm ISO 800 Superia colour negative film which you should be able to get developed at any regular high street chemist or online photo lab. Control is limited, obviously, in that there isn't any. The exposure is fixed at 1/125sec at f/10 so really you're going to need good outdoor light to get decent results, but that's true of any single-use camera.