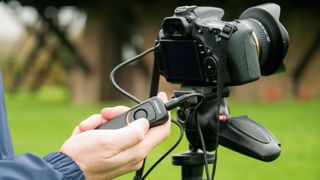 There are times when it’s best to have a hands-off approach to photography. Physically pressing a shutter button during focus-critical macro work or a long exposure low light shot could cause motion blur. Alternatively, you may need to trigger from a distance to avoid casting a shadow over your subject, or in the case of wildlife, to keep yourself concealed.

Remote releases used to take the form of a cable release that screwed directly into your shutter button, but these days you can also opt for various wireless solutions. Basic infra-red button remotes are good, but more advanced radio frequency or Bluetooth triggers offer much greater range and don’t require a direct line of sight. Then there are Wi-Fi adaptor remotes that plug in to your camera and create a wireless hotspot so your smartphone or tablet can control your camera via a companion app.

The remotes on this list all offer something a bit more special than just a basic remote shutter release. A common theme is the inclusion of an intervalometer timer, so you can program the remote to automatically fire your camera multiple times and use separate software to create a time lapse sequence from the shots.

Five things to watch out for

1. Wired or wireless?
Wireless remotes are now very affordable and give greater range, but  a wired remote will give an uninterruptible connection.

2. Going smarter
Wi-Fi and Bluetooth triggers harness the power of your smart device for even more comprehensive remote camera control.

3. Extra features
Many remotes pack an intervalometer for time lapse sequences, and some also include auto HDR and focus stacking modes.

4. Cable concerns
Even wireless remotes will have a receiver that plugs into your camera. Ensure your preferred remote is compatible.

Forget to pack your remote? There’s always your camera’s self timer, and some newer models even include a built-in intervalometer.

The original CamRanger was a clever box of tricks that connected via USB to almost all Canon and Nikon DSLRs, emitting a Wi-Fi signal so you could wirelessly connect an Android or Apple smart device to use as a remote camera control.

This new Mini version does exactly the same (though it’s no longer capable of Windows and Mac connectivity), and is around half the size of the original. Remote range is increased to 120m, however battery life is slightly reduced at 3-4 hours.

Once you’ve downloaded the accompanying app you can then wirelessly stream your camera’s Live View preview, then tap to focus and capture a still image with almost no perceptible lag. There’s a 1-2 second delay before the image is viewable on your smart device, but it’s no longer than Canon or Nikon’s proprietary wireless control systems. All typical camera settings can be adjusted remotely.

But it’s the extra shooting features that really add value. Use the intervalometer to program timelapses that can last up to 12 hours, thanks to the low power consumption in this mode. Multi-shot bracketed HDR sequences can be shot independently or within a time lapse, and there’s an automatic focus stacking mode.

Stunningly compact yet flawless in operation: the future of camera remotes

Camera remotes don’t get much smaller than Foolography’s Unleashed. Our Canon C1 sample is a tiny 35 x 13mm dongle that plugs straight into the camera’s remote socket, and barely protrudes from it. It’s compatible with a few high-end Canon DSLRs, while the C2 version caters for lower and mid-range models. Two other - even smaller - Unleashed dongles are available for different Nikon DSLRs.

Unleashed is powered by your camera, so no charging required, and its LE Bluetooth wireless connection sips very little juice. You control everything from a very slick app available for iOS and Android. This enables remote stills and video shooting with full control over your camera’s shooting settings, along with a comprehensive timelapse mode with exposure ramping options. There are even ramping preset algorithms to automatically adjust exposure for sunrises or sunsets.

With such a pared-down physical design and a reliance on camera power, it’s not surprising there isn’t enough oomph to wirelessly transmit your camera’s Live View, but you can review captured stills, and the whole system responds quickly and smoothly.

For when tethered responsiveness matters more than compactness and wireless versatility

The Digital Director doesn’t resemble a typical remote, as it’s designed as a form-fitting case that holds an iPad which you use as the remote control. Powerful processing hardware is built into the base of the Digital Director, and here you’ll also find space for four AA batteries, though a mains adaptor is also included.

Though you’re physically tethered to your camera, the benefit is instantaneous response. A superbly designed app interface displays a plethora of manual camera controls. Extra features like auto exposure bracketing, intervalometer, time lapse and video modes are just as simple to use. You can even use the Digital Director to remotely control up to 13 select Manfrotto light panels.

Drawbacks? It’s only compatible with an iPad, though various models are supported, and the tethered connection means it’s best mounted to a tripod accessory arm rather than being hand-held.

A capable wireless remote with a long range, if slightly lacking in wow factor

This convenient remote is all about long exposure and time lapse shooting. You can shoot a sequence up to 100 hours long, split down to 1-second increments, and there’s a secondary timer that’ll repeat the first sequence, also with controllable frequency. Alternatively, the Captur can be used as a straightforward remote release, with the 2.4GHz wireless connection giving a range up to 100m, while Digital Channel Matching guards against unwanted signal interference.

The wireless remote communicates with your camera via a separate hot-shoe mounted receiver unit which in turn connects via a sync cable. It’s a slightly bulky combo, but no other device like a phone or tablet is required, and the simple radio frequency connection works instantly with no prior setup.

You will however need to spend some time studying the instructions, as the pared-down controls and basic info screen info result in a cryptic interface that takes practice to master. It’s also a pity there aren’t exposure ramping features for day-night timelapse transitions.

A handy wired remote that works well for timelapses, and battery life is incredible

This is one of the cheaper programmable remotes on the market, but the price does reflect it being a wired remote, limiting versatility. However, this needn’t be a deal-breaker as the Taimi can be pre-programmed with a timelapse sequence, so once you’ve dialed in your preferred parameters, you can leave the device to do its thing. The wired link also keeps power consumption down, resulting in a huge 300-hour battery life from two AAAs. Five cables are included, so you can connect to most Canon and Nikon DSLRs, along with some Sony cameras.

Phottix’s button layout and menu interface aren't the most intuitive though, so don’t discard the manual in over exuberance, as it will be required to decipher the various timelapse and shutter release options. You can program sequences up to 100 hours long and repeat them. It’s a pity there’s no exposure ramping options for changing lighting conditions, but it’s an understandable omission at this price. You do at least get a bulb mode and conventional remote release function with burst shooting capability, along with a display backlight and optional button beep feedback.

Good if you need to connect to a less mainstream camera

Hama’s entry is designed with compatibility in mind, as this wired remote can be hooked up to various Canon, Nikon, Pentax, Panasonic, Olympus and Fujifilm cameras, plus other more minor brands. The slight catch is you’ll have to purchase your required cable separately, for an additional £10/$10. Once connected, the remote can be used to program a timelapse sequence, with customisable start time, total number of shots, exposure time and interval duration. Hama’s display interface and control layout aren’t overly intuitive, but it doesn’t take long to get the hang of things.

In addition to its time lapse capabilities, the remote can also double as a conventional remote shutter release for both single-shot and continuous shooting.

How to make your first time-lapse video