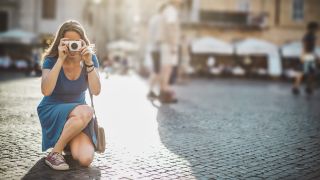 So what makes the best point and shoot camera? There are all sorts of answers, depending on the individual, so our guide covers all of them. If you're just looking for a cheap and simple point and shoot camera for family use we've found a couple of great-value alternatives. But some family adventures can be tougher than others, so we've included some rugged and waterproof alternatives. If you're going traveling, a camera with a longer zoom range would be ideal, and if you want simplicity without sacrificing image quality, then a high-quality compact is the answer.

The best camera phones can rival or even surpass point and shoot cameras for picture quality, but they are expensive to buy (and lose!) and don't have an optical zoom lens or handy external controls.

But the best point-and-shoot cameras can be just as light as a phone while also being hardier, more versatile, better in low light and, generally, cheaper. A good point-and-shoot camera can quickly become your favorite travel companion, always on hand to whip out at a moment's notice when a perfect scene presents itself.

Tough and rugged: If you're choosing a camera for the whole family, for days out on the beach or school camps, you'll want one that's waterproof and tougher all-round.

Longer zooms: A regular point and shoot camera will give you a zoom range of 3-5x, which is OK generally, but for travel and a wider range of subjects, a longer zoom is better.

Better quality: Most point-and-shoot cameras use small sensors, which keeps the price and size down but restricts the quality. These cameras have bigger, better sensors and are a worthwhile step up.

The best point and shoot camera in 2020

You don't want to pay a fortune, you just want a decent little camera that doesn't cost much to buy and is easy to use, right?

Canon has been pushing its digital IXUS range for over 15 years now (called ELPH in the North America, and while each version has become a little slimmer and more refined, they’ve essentially remained stylish point-and-shoot cameras that will readily slip into a pocket and won’t break the bank. What we get here with the Canon IXUS 185 / Elph 180 is very much a beginner’s model, delivering 20MP from a relatively small 1/2.3in sensor. The zoom offers a respectable 8x optical range, starting from a usefully wide setting equivalent to 24mm, though light sensitivity runs from just ISO 100 through to ISO 1600, with the camera limiting itself to a maximum ISO 800 when left on Auto setting. Even with the Program mode implemented, operation remains pared back, although there are some creative digital filter options available for anyone choosing to dig deeper into the menus. So, no prizes for specs, but for this kind of money the Canon IXUS 185 does pretty much all you would expect. If cheap and simple is what you want, this is the best point and shoot camera right here!

Any point-and-shoot compact worth its salt has to differentiate itself from what a smartphone can do. The most useful advantage it can offer is an optical zoom, and that's what you get here. The W800 has a lens that spans a focal range from 26-130mm, which covers most everyday needs easily. This is a basic camera, though, and the 2.7in LCD screen is pretty small with a low resolution by today's standards. The little Sony can only capture standard HD 720p video and its continuous shooting speed is practically non-existent at 0.5fps, but this is a low-cost pocket-camera, so you can't expect it to compete with higher end models.

The XP140 is easy and eye-catching – you won't lose this on the beach!

Dunk it 25m underwater, drop it on the rocks from 1.8m in the air or take in into sub-freezing temperatures; the Fujifilm FinePix XP140 can handle practically anything you care to throw at it. Even without factoring in its tough build, this is a capable camera in its own right, delivering high-quality images in a range of lighting conditions, and even managing to shoot UHD 4K video (albeit at a pretty middling 15p frame rate). It's extremely easy to pick up and use, with helpful scene recognition modes to make the most of different situations, though it's worth noting that it lacks manual modes and RAW capability, which might start to frustrate the more serious photographer. If that describes you, then it might be worth taking a gander at the Olympus Tough TG-6, just below...

Hard as nails but simple to use, the TG-6 is great for adventure

If you really do need a tough point-and-shoot camera, the Tough TG lives up to its name. It might have a small 1/2.3-inch sensor, but it produces good quality images at all zoom settings of its 25-100mm equivalent lens, as well as high-quality 4K video too. It also has many superb extra features such as Macro and Microscope modes that allow you to get closer than ever before to your subjects, and technically minded photographers will love the pro-level features like RAW support and high-speed 20fps burst capture. Despite this, the fact that this camera can take a kicking means it’s a great one for families, as even the clumsiest of little ones would have a job breaking it. A superb travel camera for anyone, Olympus’s latest Tough TG is the best point-and-shoot camera for photographers who like living a little more adventurously.

Panasonic’s long-running ZS series ('TZ' in the UK) always offers a capable choice for those seeking a fully-featured point and shoot camera for travel, and the Lumix ZS70 – also known as the TZ90 – is no exception. This Wi-Fi-ready point and shoot camera boasts enough control to satisfy a broad range of users, with the creative advantage of a 30x optical zoom plus Raw shooting, and it performs well in terms of both stills and video (with 4K offered in the case of the latter). A nice little touch is the inclusion of an electronic viewfinder – even if it is tiny – just above the LCD screen, as well as a lens control ring. The camera’s 49-area autofocus is pretty reliable and speedy enough, while image quality is generally very good, with the metering system balancing a variety of scenes. The ZS70 is one of the best point and shoot cameras for photographers who want maximum versatility and pocketability, but minimum expense.

It may be diminutive, but the 20.3MP Canon PowerShot SX740 HS has a lens reach that outdoes what most professionals can achieve with their DSLRs, offering a focal rang equivalent to a whopping 24-960mm in 35mm terms. Also very useful here is an LCD that can be flipped to face the front, and thus the intended subject. Unsurprisingly, we also get a host of selfie-friendly shooting modes, although the camera still offers plenty of control for times when you need to intervene, with the usual PASM suspects selectable via the mode dial. You also get the ability to shoot 4K video (if you can make do with just Full HD the previous version Canon PowerShot SX730 HS may be found slightly cheaper). Autofocus performance is very good, however, as is image quality. Overall, this is a point-and-shoot camera with plenty of punch.

If you want a point and shoot camera that also delivers a visible jump up in picture quality from a camera phone, you need one with a larger sensor. The Panasonic LX15, which goes by the name LX10 in some territories, has a 1-inch 20-megapixel sensor that does the job perfectly. It's true that there is no built-in EVF, which might put some people off, and the smooth finish to the body might make it look stylish but doesn't make for the firmest handgrip. But the responsive touchscreen is terrific, the  dual control rings provide a very pleasing user experience, and the 24-72mm has one of the widest aperture settings around, courtesy of its f/1.4 to f/2.8 aperture range. Overall, this neat little snapper has the near-perfect balance of features, performance and pricing. It's small enough for your pocket, easy for beginners, but powerful enough to be one of the best point and shoot cameras for serious photographers.

The Canon PowerShot G9 X Mark II is a rather sophisticated looking point-and-shoot camera, courtesy of its rather minimalist yet traditional appearance and streamlined controls, which have the benefit of keeping the body endearingly dinky. Despite this, it's something of a beast under the bonnet, with a 1in sensor paired with a wide-angle 28-84mm equivalent lens, whose maximum aperture at wide-angle is a respectable f/2. There's no viewfinder, but the 3in LCD on the rear also responds to touch, which again ensures that physical controls can be kept to a minimum. To sum up, this is a neat-looking, well-specced point and shoot compact camera that can produce vastly superior images to a camera phone – and it's rather nice to look at and use.

If you can live without a zoom, the XF10 is like a DSLR in your pocket

One of the most travel-friendly cameras in Fujifilm’s range, the XF10 is designed to be thrown into a bag or pocket and taken on adventures, weighing just 280g. It’s designed to make it easy to produce some of Fujifilm’s legendarily beautiful JPEGs straight out of camera, with the full suite of Film Simulation modes for a highly stylised look. There is a catch. It's small, it's pocketable and it has a big APS- C sensor to product superb images – but this has only been possible because it has a fixed focal length 28mm wide-angle lens rather than a zoom. Some users have complained of issues with autofocus speed and accuracy, so it's a camera to be used with a bit of care, and not just for instant snapping.

Pricey, but a real pocket rocket for both snappers and experts

While the RX100 VI does cost more than most point-and-shoot buyers are willing to countenance, we couldn’t not include it here for the simple reason that this series represents pretty much the best the world of compact cameras has to offer. As the name implies, the VI is the sixth iteration in a series that Sony has been perfecting for many years, providing an exceptional blend of image quality and portability. While the VI has since been superseded by the VII, we reckon this model offers an outstanding balance of power and value for money. Super-smooth 4K footage and dynamic burst shooting – it’s all here, and there are plenty of extra features that many cameras on this list don’t offer, such as the pop-up electronic viewfinder. And all this is housed in a camera small enough to pop into a pocket – provided you don’t mind a few of the controls being a little fiddly to use, it’s a boon for travel photography and videography alike. If you like the sound of the RX100 VI but are still put off by the cost, then check back through previous models in the RX100 series, as they are without exception very good, and most of them are popular enough to still be in production. And, alternatively, if you've got more cash to splash then definitely take a look at the RX100 VII.