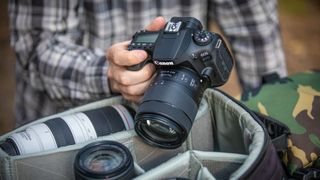 Choosing the best Canon camera just got harder! The latest Canon EOS R5 and EOS R6 mirrorless models look set to shake up the enthusiast and pro camera market in a the biggest way possible. But there's more to the Canon camera range than its amazing new full frame EOS R models.

Canon cameras come in all shapes, sizes and prices. They include compact point-and-shoot camera for holiday snaps, beginner-friendly DSLRs for learning about photography, and video-focused EOS M cameras for YouTube and content creation. Maybe you need an advanced body for shooting weddings at weekends, or even a cutting-edge professional camera for photographing sport – whatever you need, Canon has you covered.

The brand is best known for its interchangeable lens systems, which come in two main flavors. The DSLR vs mirrorless cameras debate keeps rumbling on, but since Canon makes both kinds you can choose the right technology to suit your needs – whether it's the enthusiast-oriented Canon EOS 850D / Canon EOS Rebel T8i or a full-frame DSLR like the EOS 5D Mark IV or EOS 6D Mark II.

The big news right now, of course, is Canon's full frame mirrorless EOS R system, and the new EOS R5 and EOS R6. But don't rule out the existing Canon EOS RP, one of the cheapest ways to get into full frame photography, or the Canon EOS R, which is a professional quality camera available at steadily falling prices.

Lots of people will tell you DSLRs are old-fashioned and that mirrorless cameras are the future, but DSLRs still have a lot to offer, including chunky, grippable bodies, clear optical viewfinders, great battery life and good value for money. Canon's DSLRs are split into APS-C cameras aimed at beginners and enthusiasts, and full frame cameras aimed at experts and pros – and we've picked out two of each.

Brilliant for beginners, this Canon has plenty for enthusiasts too

The pint-sized Canon Rebel SL2 (or EOS 200D) was a really big seller (you can still get it, in fact), but its successor the Rebel SL3 (aka EOS 250D) improves on it in every way. In fact we believe it's the best Canon camera for beginners you can buy right now. Canon’s top-of-the range APS-C sensor with 24.1MP of resolution delivers excellent image quality, and Live View shooting with the LCD screen so easy and intuitive, with such good autofocus, that we’d actually say this is one of the only DSLRs where composing shots with the screen is as easy as with a mirrorless camera. Canon also packs in 4K video, which was missing from the previous SL2, wrapped up in an ergonomically designed DSLR body that's just about the smallest on the market.

The EOS 90D has the highest resolution yet in an APS-C camera!

The Canon EOS 90D is an astounding APS-C workhorse of a camera, available for a fantastic price. It combines the highest resolution yet seen in an APS-C sensor of 32.5MP, with high-speed frame rate of 10fps, and it also manages glorious uncropped 4K video – none of that irritating crop that has plagued Canon cameras in the past. Its handling and ergonomics are a joy, reminding us of why shooting on a DSLR is such an enjoyably tactile experience, and it's available for a welcome enthusiast price point – not to mention the fact that you get an optical viewfinder, which many people still prefer to the electronic viewfinders on mirrorless cameras. Rumours of the DSLR's death will have been greatly exaggerated if Canon keeps on producing models as good as this.

The archetypal pro DSLR comes back with a bang for 2020

The amazing Canon EOS-1D X Mark III turned out to be much, much more than we were expecting. Not only is it an update to the 1D X workhorse series beloved by professionals worldwide, it's also an important step forward for DSLRs generally, boasting deep-learning AF, uncropped 4K (something that had been missing from Canon cameras for quite some time), a revamped control system and much more besides. If you need a camera that just shoots and shoots, with whip-smart AF and an indomitable burst rate... well, you probably don't need us to tell you twice. But we'll do it anyway: the Canon EOS-1D X Mark III is an astonishing camera.

An affordable entry into full frame photography, and feature packed too

Full HD video not 4K
Bulkier than the EOS RP

The EOS 6D II is Canon's cheapest full frame DSLR and the next step up from the EOS 90D. It might be affordable, but it's far from basic. The advantage of a full frame sensor is that it gives superior image quality, partly because you tend to get more megapixels, and partly because the pixels (photosites) are bigger and can capture more light. The 26-megapixel sensor in the 6D II offers a useful advantage over 24-megapixel cameras, it has a powerful 45-point AF system for viewfinder shooting and Canon's Dual Pixel CMOS AF for live view photography, and it has a decent 6.5fps continuous shooting speed. What we really love is the streamlined handling and control layout and the fully articulating rear screen. If you can afford the extra over the APS-C format EOS 80D (above), the EOS 6D II would be our top recommendation as the best Canon camera for enthusiasts.

While the EOS R (below) is in many ways like a mirrorless 5D Mark IV, the DSLR design still has lots of advantages – including a lag-free optical viewfinder, better handling with bigger lenses, and much better battery life. While it's not technically a professional camera, pros have long embraced this workhorse and it's likely to be one of the best cameras for professionals for some time to come. It's not a specialist camera designed to do a single type of work, but a robust all-rounder that can turn its hand to almost any assignment. The 61-point autofocus system is fast and powerful, and Canon's Dual Pixel CMOS AF technology makes Live View AF fast and snappy too. The 30.4-megapixel resolution isn't the highest, but it gives a great balance of resolution and low-light, low-noise performance.

As with its EOS DSLRs, Canon now makes mirrorless cameras in two sizes. This time, though, they use different lens mounts and are aimed at very different users. The smaller APS-C EOS M cameras are for non-professional hobbyists and beginners (though they also appeal to bloggers and vloggers). The newer, full frame EOS R models use a new RF lens mount and are designed for professionals (EOS R) and advanced amateurs (EOS RP).

It's too soon for us to pass judgement on the brand new Canon EOS R5 and EOS R6, but we have had our hands on these cameras and can tell you exactly what we think of them so far. In the meantime, here are Canon's existing mirrorless models.

The EOS M series has in the past often felt a little like the unloved child of the Canon family. Happily, with the advent of the EOS M6 II, the firm can finally be said to be taking its APS-C mirrorless line seriously. The M6 Mark II sports a powerhouse of a sensor in the form of a 32.5MP APS-C chip, and can burst-shoot at 14fps or up to 30fps in RAW Burst mode. Then there's also uncropped 4K video, an expandable ISO maximum of 51,200 and a high-resolution tilting touchscreen. M-series cameras in the past have been appearing to attempt to carve out a niche as decent second cameras, but the M6 II makes a convincing case to be your primary camera, and it's really only the slightly meagre M-series lens selection that holds it back.

Full frame mirrorless cameras don't come much cheaper than this

The EOS RP is Canon's second full frame mirrorless camera, and it's smaller, lighter and a lot cheaper than the first, the EOS R. It's designed to be a compact, affordable and easy to use entry point into Canon's full frame mirrorless system, and it succeeds brilliantly. Its small dimensions mean it can sometimes feel overbalanced by larger lenses, though, and the 4K video mode comes with some caveats – the image frame is cropped by a factor of 1.6 and you can't use Canon's speedy Dual Pixel CMOS AF system unless you drop the resolution to full HD. On the upside, the pictures are clear and sharp, the vari-angle touchscreen display is a real advantage for both stills and video, and the inclusion of an EF lens adaptor means you can use existing Canon DSLR lenses alongside the new but growing RF lens system. What a great camera! Is this the best Canon camera for enthusiasts? It's right up there with the EOS 6D Mark II DSLR.

The EOS R has met with a mixed reception, perhaps because it's going to take time for users to figure out where it fits in, but we reckon with its combination of resolution, features, pro build quality and keen pricing, it's going to make its own gap in the market! On paper, it looks a bit like a mirrorless version of the Canon EOS 5D IV digital SLR (above), but there are some important differences. One is that it has a much more advanced autofocus system with an amazing 5,655 focus points, another is that it has a brand new lens mount bringing the promise of new and exotic lens designs. What we really like, though, is that Canon has also made lens adaptors that let you fit your existing Canon EF and EF-S lenses, so it's easy to add the EOS R to an existing Canon system.

DSLR and mirrorless cameras are great, but sometimes you need something smaller, cheaper or just a bit simpler to use. These are our top three Canon compact cameras right now, aimed at three different kinds of photographer.

When the Canon PowerShot G7 X Mark II proved unexpectedly popular with the vlogging community, Canon went all in and produced the G7 X Mark III, adding full uncropped 4K video and a 3.5mm microphone port. These features beautifully complimented lots of the strengths of the Mark II, which included a flip-out screen and a beautiful 24-100mm equivalent f/1.8-2.8 lens, making for an extremely solid all-around compact that'll do everything most vloggers need it to, and indeed many photographers, though the lack of an eye-level viewfinder is a bit of a shame. The Mark III is arguably still a little expensive, but if you can afford the outlay, you'll find it an extremely capable compact for video and stills alike.

Not everyone needs professional features, full frame image quality, 4K video and interchangeable lenses. Sometimes you're just looking for a decent, simple and effective (and cheap!) little camera you can slip in a pocket and which the whole family can use. The little Ixus 185 certainly passes that last test, and yet delivers some rather impressive specifications at the same time. One of the key advantages of a compact point and shoot camera over a smartphone is that you get a zoom lens, and the one on this camera has a massive 8x range, from 28-224mm. It uses a small 20-megapixel 1/2.3-inch sensor, so the picture quality is going to be adequate rather than great, but it's fine for family snaps and it can go up to ISO 1600 for shooting indoors or in low light. It even looks pretty smart, so the Ixus 185 is a really appealing (and did we mention cheap?) little snapshot camera.