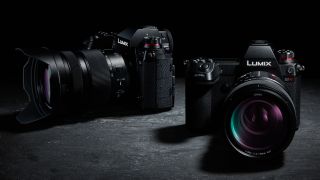 How do you choose the best full frame mirrorless camera today? These cameras have stormed the market and dominated the headlines for the past couple of years in a constant battle of specifications and one-upmanship. It can all get quite confusing.

Sony started it all with the Sony A7 back in 2013, and for a while this company had the full frame mirrorless camera market all to itself. But then came Nikon, and Canon, and Panasonic, each with its own twist on the mirrorless format and its own plans for dominance.

And then there's Leica! Amidst all the noise surrounding the full frame mirrorless cameras of the big brands it's been easy to forget the Leica SL, launched in 2015. But we don't think anyone is going to forget its brand new replacement, the Leica SL2, which shares the high-end imaging and video tech of the Panasonic Lumix S1R but adds in Leica's own unique styling and design to make it one of the best Leica cameras you can get right now. What's especially interesting is that this is a comparably affordable Leica and it's backed by the momentum of the L-mount Alliance, with a growing lens range already and more to come.

As so often, though, the 'best' camera ultimately depends on what you want it for. Perhaps surprisingly, none of these cameras can really be called 'the best' all round. The best full frame mirrorless camera for resolution is not the best for action, or video, and it's certainly not the best value.

So we've split this guide into four sections: 'Best resolution', 'Best for sports', 'Best for video' and 'Best value'. All of these cameras have something to offer, but the 'best' one will depend on you, and what you are looking for.

It's the highest resolution full frame camera yet, but that's not all it does

With its new 61-megapixel sensor, the Sony A7R Mark IV inevitably comes top of this particular category. The 'R' models in Sony's A7 series cameras are designed first and foremost for resolution – and the Sony A7R Mark IV certainly delivers. The previous A7R Mark III set the standard for a time, but the A7R Mark IV brings a new record-breaking 61-megapixel that has the highest resolution of any Sony – or indeed any full frame camera. Its other specs include 10fps continuous shooting – an amazing achievement at this resolution, advanced Eye AF and 4K video. The 10fps frame rate doesn't make it a sports camera, though, as it lacks the outright speed, responsiveness and buffer capacity for that, and Sony's 4K video seems stuck in a bit of a timewarp right now compared to the advances being made by rival makers. The Eye AF and Real-time tracking are excellent, but having to switch to the Super 35mm crop format for the best quality video is a nuisance.

The Lumix S1R is built for quality and performance, not size or cheapness!

If you need top-quality stills photography and 4K video features (including a full-frame first – 60/50p 4K capture), the Lumix S1R is a close rival to the Nikon Z 7. It costs substantially more than the cheaper Lumix S1 (below), but the extra resolution is likely to prove well worth it. Both are pretty big, hefty cameras, though, and the same goes for the L-mount lenses we’ve seen so far from Panasonic and Sigma (also part of the new L-mount alliance, along with Leica). If you thought mirrorless cameras were supposed to be small, you might be surprised by the size of this one – but with larger lenses or tripod use, the extra size, controls and overall balance are arguably better than a smaller camera's. We'd pick the Lumix S1R for stills, but the cheaper S1 is better for video, as it can caputre full width oversampled video (the S1R has to swap to a smaller crop or use lower-quality line-skipping during full frame capture).

Leica doesn't just make retro rangefinders and luxury cameras for the rich. The SL line sets out to offer Leica's legendary design, build quality and lenses to discerning professionals. But while the original SL was good, the brand new SL2 is simply exceptional. First, it uses the L-mount that has now been adopted by Sigma and Panasonic for its full-frame mirrorless cameras, so there is an increasing range of optics available, thanks to the L- mount lens roadmap. Second, it's no secret that the internals, including the sensor, in-body stabilization and 4K capabilities come straight from the Panasonic Lumix S1R. But what's on the outside is pure Leica, including a beautiful minimalist design, simple but superbly thought out controls and a classy, elegant interface that works brilliantly. Yes, the Leica SL2 is expensive, but it's also very, very good!

Huge resolution, high-speed shooting, 4K video... what's not to like?

The Z 7 was Nikon's first full-frame mirrorless camera, and an instant classic. Nikon managed to produce a near-perfect camera at it's first attempt. The Z 7 combines an ultra-high-resolution 45.7-megapixel sensor with a 493-point hybrid autofocus system and the ability to capture images at up to 9 frames per second (without needing a battery grip), though its use of just a single XQD card slot has proved controversial. Like the Sony A7R Mark IV, the Nikon Z 7 is an accomplished all-rounder that can also handle action photography and video. It doesn't have as many megapixels, but it's a lot cheaper. It doesn't quite reach the A7R Mark IV's 10fps frame rate, but our experience with both cameras suggests the Nikon's in-body stabilization is just that little bit more effective. It scores another point over the A7R Mark IV by offering 10-bit internal 4K video capture, for higher potential quality after grading than regular 8-bit.

The EOS R has met with a mixed reception, perhaps because Canon has pitched it into a bit of a no-man's-land in the full frame mirrorless camera market. Its 30MP sensor is mid-way between the two resolution bands chosen by rival makers, its continuous shooting speed is pretty slow, Canon is the only full frame mirrorless brand not to offer in-body image stabilization, and the cropped 4K video now looks pretty archaic! It's not all bad, though. Prices for the EOS R are falling (perhaps in recognition of its shortcomings) and making it much more appealing. And what we really like is that Canon has also made lens adaptors that let you fit your existing Canon EF and EF-S lenses, so it's easy to add the EOS R to an existing Canon system.

We thought the original Sony A9 was fast, and then Sony makes this...

To quote from our own hands on review verdict, the Sony A9 II is the fastest, most ferocious full-frame sports camera we've ever used. Its blistering speed and autofocus performance are matched only by its phenomenal connectivity, which promises to be a game changer for pro shooters. However, we would love to have seen Sony implement something akin to Olympus' Pro Capture feature, so that you never miss the critical moment. It's a bit of a disappointment to find Sony's not yet ready for the new super-fast CFexpress format (and if ever a camera needed high-end cards, it's this one) and Sony's not really made any attempt to move its 4K video tech any further forward – so no 10-bit capture or 60/50p frame rates just yet.

The Panasonic Lumix S1 may not have the headline-grabbing megapixel count of its S1R stablemate, but for many stills photographers 24 megapixels will be enough – and this model is a lot cheaper, if still more expensive than other 24-megapixel rivals. .This is a great all-round performer for shooting both still and video, with an excellent array of useful features for photographers and videographers alike. While larger than the mirrorless competition, the S1 feels very solid and is built to last. Its controls take some getting used to, but the S1 offers a superb blend of direct and touch-control. The key advantages of the Lumix S1 lie in its 4K video capabilities, however. Not only can it shoot oversampled full-width 4K video, it can do it at up to 60/50p too. It shows that the best full frame mirrorless cameras for video don't have to be the most expensive, and the processing overheads of higher resolution models can compromise their 4K capture capabilities.

The EOS RP is Canon's second full frame mirrorless camera, and it's smaller, lighter and a lot cheaper than the first, the EOS R. It's designed to be a compact, affordable and easy to use entry point into Canon's full frame mirrorless system, and it succeeds brilliantly. Its small dimensions mean it can sometimes feel overbalanced by larger lenses, though, and the 4K video mode comes with some caveats – the image frame is cropped by a factor of 1.6 and you can't use Canon's speedy Dual Pixel CMOS AF system unless you drop the resolution to full HD. On the upside, the pictures are clear and sharp, the vari-angle touchscreen display is a real advantage for both stills and video, and the inclusion of an EF lens adaptor means you can use existing Canon DSLR lenses alongside the new but growing RF lens system. This is a great little camera if you're ready to accept its limitations.

It's the cheaper Nikon Z model, but better for video and more affordable!

Nikon makes two Nikon Z models. The Z 6 has 24 megapixels, while the more expensive Z 7 has 46 megapixels. Normally, we'd always say more is better, but the Z 6 has a lot going for it besides its lower price tag. For a start, it has a faster continuous shooting speed than the Z 7, better image quality at high ISO settings and the ability to capture uncropped, oversampled 4K video – so your angle of view doesn't become narrower when you switch to video capture and you get the best quality. On paper, the 24.5-megapixel sensor of the Z 6 appears to offer no advantage over smaller and cheaper APS-C cameras like the new Z 50, but the sensor's extra size means its images are much crisper and cleaner, especially at higher ISO settings. Nikon is steadily releasing native Z-mount lenses, but if you get this camera with Nikon's FTZ mount adaptor, you can use any current Nikon DSLR lens without restriction.

The Sony A7 III matches rivals for performance, not necessarily handling

It might not have the glamor of Sony’s top-flight A9 and ultra-high-resolution A7R III bodies but the A7 III camera grabs most of the best bits from both pricier models and delivers them in a more affordable package. Headline features include highly effective 696-point AF system and a 5-axis image stabilisation system that promises 5EV of compensation.There’s a new 24.2MP back-illuminated image sensor, coupled with the latest generation of image processor. Handling is excellent or annoying, depending on whether or not you're a Sony fan. The tilting screen is nowhere as versatile as the vari-angle screen on the Canon EOS RP, and the minimal external controls and small body don't compare well against the more wieldy Nikon Z 6.