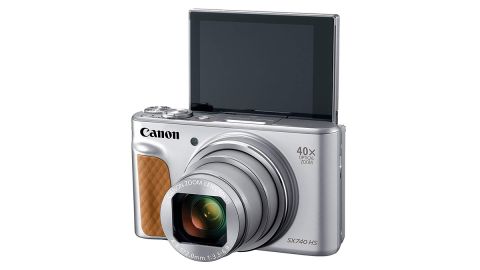 If you're after a travel camera that's got all the zoom you could ever want, but won't eat into your baggage allowance, the PowerShot SX740 HS is worth considering. Extras like 4K video broaden its appeal, as does its flip-up screen - just don't go comparing image quality too closely to a well-specced camera phone, as you may be disappointed.

You'd be forgiven for thinking smartphones have killed the conventional compact camera, but there's still a market for big zoom compacts like the Canon PowerShot SX740 HS. With its 40x optical zoom, you can get closer to the action than with any multi-lens camera phone.

The PowerShot SX740 HS replaces the SX730 HS, with the only notable upgrades being the addition of 4K video recording and a new Digic 8 image processor. All other main specs and features remain the same, including the 40x zoom lens that gives a hugely versatile focal range equating to 24-960mm (in 35mm camera terms). 5-axis optical image stabilisation is included and is essential for keeping shots sharp when shooting at such long focal lengths.

Canon's 20.3 megapixel sensor is carried over from the SX730 HS and is starting to show its age, with its sensitivity range topping out at just ISO 3200. There's also no ability to shoot photos in Raw, which is a pity on a camera that costs as much as an entry-level DSLR body and does have manual and creative shooting modes.

The new Digic 8 image processor at least enables 4K video recording at 30/25 fps, and there's continuous stills shooting at 10 fps. Wi-Fi and Bluetooth connectivity mean there's wireless image sharing via your phone, and your phone's GPS can also be used to location tag your photos in conjunction with the Canon Camera Connect app.

The build quality of the SX740 HS is, well, fine. The body is predominantly plastic, and its design hasn't really changed since the SX720 HS from 2016. It doesn't feel like a particularly premium product, but neither is it flimsy or unpleasant. There are sizeable, grippy panels on the front and rear, and the camera feels comfortable and secure in the hand - refreshingly so if you're more accustomed to a slippery, wafer-thin smartphone.

Though the SX740 HS is primarily an easy to use point-and-shoot camera, Canon has fitted it with a dedicated mode dial enabling instant access to aperture and shutter priority modes, as well as a fully manual mode if you want to get really creative. The mode dial can also be used to select special effects, including soft focus and skin-smoothing effects to enhance portrait shots, and fun effects like fish-eye distortion and a toy camera filter.

The 3-inch, 922k-dot LCD screen is bright and color-accurate. It's also able to flip up and face forward for easy selfie shooting. However, it isn't touch sensitive, so you don't get the ability to touch to select a focus point, and you'll need to use the physical buttons on the rear panel to scroll through images.

The SX740 HS also lacks an electronic viewfinder - something that is included on rival cameras like the Nikon Coolpix A1000 and Panasonic Lumix TZ95/ZS80. This is frustrating on very bright days when the main screen can be difficult to see, but it also means the camera can be slightly smaller. What's more, the EVFs on competing compact cameras are a far cry from those on high-end mirrorless interchangeable lens cameras - the compact camera EVF tends to be very small at around 0.2-inches in size, and this makes them quite uncomfortable to use, especially if you wear glasses and your eye is therefore positioned slightly further back.

There are no unpleasant surprises when shooting with the SX740 HS. It powers up fast and focuses quickly in most lighting conditions. Exposure metering is generally accurate and strikes a good balance between preserving highlight and shadow detail, but overall dynamic range is restricted and some higher contrast shots can look dull and uninspiring.

There is a slightly irritating delay between pressing the shutter button and an image being captured in Auto mode. We used a fast SD card during our testing, so this shouldn't have been the cause of the issue. It left us continually wondering whether we captured each shot in time.

Images are well saturated and generally easy on the eye. At longer zoom settings it's clear there is significant image processing going on behind the scenes in order to maintain a sharp image and compensate for camera shake. Image quality is acceptable when zoomed right in, but shots are noticeably softer.

In low light the limitations of the small 1/2.3-inch sensor inside the SX740 HS become more evident, as the camera struggles to maintain fine detail in the face of increasing image noise. The maximum sensitivity of ISO 3200 is also low by current standards (for context, a Huawei P30 Pro camera phone tops out at ISO 409,600!), but the Canon's optical image stabilization does help maintain compensate for this and does a good job of ironing out camera shake.

However, if you're thinking about purchasing an SX740 HS for an upgrade in image quality from a modern flagship smartphone, think again. While the Canon has its advantages - ergonomics, huge zoom, etc - and it can snap a nice shot, you don't get the cutting-edge image processing that a powerful smartphone has to offer. Images therefore lack the very fine detail and overall wow factor that a well-sorted phone camera with powerful HDR processing can offer.

If you're after a versatile, long-zoom travel camera, the PowerShot SX740 HS doesn't disappoint, but neither will it amaze you. It does everything quite well, but aside from the huge zoom range, there's little to get excited about. Performance is perfectly adequate, but a current top-end camera phone will trounce it for wide-angle image quality. Although in fairness, the latter is applicable to any current small-sensor compact camera. While there may still be 'new' travel cameras like the SX740 HS being released, most are just subtly refreshed versions of older cameras and are based on ageing core technology.

Canon isn't pushing the boundaries here, even in the context of rival compact cameras. The omission of a touch-sensitive screen stings when cameras like the Nikon Coolpix A1000 does include this. The Canon's lack of raw image capture and an electronic viewfinder also looks bad on paper, but we accept many users are unlikely to purchase a camera like this in order to shoot raw, and electronic viewfinders in this segment are more of a token marketing extra than a truly useful feature.