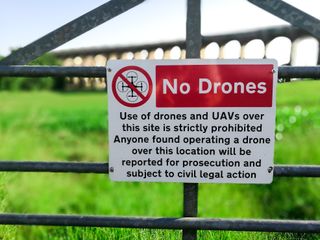 The recent launch of the DJI Mavic Mini has highlighted that the rules on drones are changing. The Mavic Mini has been designed to weigh less than the 250g ( 0.55lb) maximum weight that will allow you to fly a drone without official registration in the UK, USA and Canada.

Innovation always leads to new need for new regulation. Drones certainly mark such a revolution, opening the skies to a broad range of consumers – with a far wider appeal than the older niche hobby that was radio-controlled planes.

There were always rules, of course, but now the world is watching, so regulations have been tightened and formalized in a way not true just a few years ago. Most significantly, nearly every drone with a decent camera now needs to be registered.

But this new registration, and the weight limit, are just some of the things you need to know if you are going to fly a drone safely and legally. Below is our expert guide on what you can and can't do – and how to stay on the right side of the law with your quadcopter.

The term “drone” seems to be the one we’re stuck with, but it’s actually one the early community of hobbyists never really liked. It dates back to early military unpiloted ‘target’ aircraft used for practice, and is associated with unmanned bomb raids in more recent conflicts. Hobbyists tend to prefer “quad,” short for quadcopter. That’s a bit specific for regulators though, who also want the rules to apply to drones with  6 or more propellors, or those shaped like flying wings.

To side-step this confusion, the lawyers generally stick with the terms Unmanned Aircraft System (UAS), Unmanned Aerial Vehicle (UAV) or Remotely Piloted Aircraft Systems (RPAs). Most drones also feature a camera, which technically makes it a Surveillance UAS, or sUAS, which matters.

The big get-out from registration is weight. The UK, USA, Canada and China only require registration for UAVs which have a take-off weight (including battery) of 250g or more. Anything beneath that is classed as a toy, which is why the new DJI Mavic Miniis such big news. The UK's registration scheme for drones over 250g opens on 5 November - and becomes mandatory on 30 November 2019.

The Mavic Mini’s camera is capable of capturing 2.7K video – twice as many pixels as High Definition – and is supported by a 3-axis gimbal stabilizer like that on prosumer and professional camera drones.

That doesn’t mean that the other regulations here don’t apply – just that you won’t need to pay anything to the authorities.

Drone rules around the world

In all the jurisdictions here – and indeed most – drones are restricted to flying to a maximum height of 120m/400ft AGL (Above Ground Level). That means about the height of the ground directly beneath the drone (not including buildings). For the most part this stays out of the way of civil aviation, which tends to operate at 500ft or above except when landing.

You must always be mindful, however, of helicopters entering the area you’re operating in, and land as quickly as possible. Some drones can technically fly much higher – into the thousands of feet – but this is illegal and very dangerous; wind at these altitudes could easily whip your drone away from you.

One of the biggest selling points of a drone is the distance the drone can fly from you, with the likes of DJI and Parrot talking about 4,000m (2.5 miles) and in some cases 8,000m (5 miles) transmission distances.

In most countries these distances are a moot point. In the UK, and much of Europe, the limit for distance from the pilot to the drone is 500m (550 yards), and the pilot must have Visual Line of Sight (VLoS), meaning they must have an unobstructed view of the aircraft from where they’re standing. What you can see on the LCD monitor is not considered good enough.

In the USA, VLoS is a requirement, but there isn’t a specific distance limit. In both cases, though, VLoS is considered to be less for a smaller aircraft which can’t physically be seen at that distance. It’s worth bearing in mind that radio waves – the control signals – also travel in straight lines, so this regulation will help ensure you don’t lose your drone.

In the UK, you must keep your drone at least 50m (150ft) from people and property that is “not in your control.” That effectively creates an invisible sphere around your drone, which prevents you from getting any closer. That rises to 150m in a ‘congested area’ (town), or a organized open air crowd of over 1,000 people. Since 150m is above your legal ceiling, that effectively rules out a lot of operation (this is where commercial exceptions can really help).

Rules in the US are similar if a little more straightforwardly worded – you’re not allowed to fly over groups of people, stadiums, sports events, or near emergency response efforts. It should probably go without saying, but you’re also meant to be sober! Dig a little deeper, though, and you’ll find inconsistent regulation between FAA rules on drones and model aircraft

Airports are considered no-fly zones for UAVs for obvious reasons. In the UK an ‘Aerodrome Traffic Zone” is a radius of 2.5 nautical miles from the centre of the longest runway, with an additional rectangular protection zone 1km wide and 5km from each tip of the runway. For a single-runway airport the resulting no-fly zone looks like a bit like the London Underground logo.

In the US you simply need to be 5 miles from the airport, while in Canada the distance is 3 nautical miles (5.6km).

The easiest way to find out if you’re too near an airport is to use one of the online tools. In the UK the excellent Drone Assist app by the National Air Traffic Service (NATS) is available on iOS and Android. This also shows live notifications – called NOTAMS – of temporary restrictions for events like an air show.

In the USA, there are similar services including AirMap and the, well, slightly less elegant B4UFly from the FAA itself.

It’s worth remembering that many drone manufacturers use their GPS systems to geofence sensitive locations like airports, but they do not necessarily use the correct legal distances. DJI provide an interactive map which indicates their geofencing, and is a great way to check for airspace issues whatever brand you use.

You might think the much physically bigger USA would offer more space, but in practice there are plenty of restrictions:

• National Parks
• Military bases
• Within 15 miles of the White House
• Camp David
• Marine Protection Areas
• Sports arenas
• Wildlife refuges (the minimum flight height over these is 2,000ft, well above the max height for UAVs.
• Prisons
• Most, but not all, State Parks

You should also remember that the USA sometimes acts like 50 different countries when it comes to legal matters.

It won’t be a surprise to know you’re not allowed to fly over prisons, but that’s only the start of a very long list of places which have banned drones. These include:

You can get permission from the CAA on a case-by-case basis, an indeed from airports, if you meet the requirements.

Just like its neighbor to the south, Canada bans:

Plenty of NGOs own large tracts of UK land and are not drone-friendly, like the National Trust, which has opted for a “strict policy.”

When you see videos online that seem to contravene the rules we’ve seen, either the users had permission or were breaking them. If it’s the latter, they’ve just posted a time-stamped piece of evidence!

The advice in this article covers recreational use, but it’s very easy to find that you’ve become a commercial operator. Shoot a video for someone else’s Instagram or YouTube and, especially if they’re promoting services, you’re effectively providing a service to a commercial client (even if you didn’t charge them). You can find the UK CAA’s definition of commercial operations here, or the USA’s FAA definition here.

In either case, commercial use comes with additional regulatory requirements, but the qualifications required can also yield certain advantages when comes time to distance limits and the use of controlled airspace. In the UK look for a Permission for Commercial Operations (PfCO). In the US it’s called Part 107. The later seems to be cheaper.

The regulations can sound pretty burdensome, but remember to take a friendly approach when challenged and – if you’re operating an aircraft over 250g – carry with you the certification documents and make sure you’ve stuck the number on your drone if you are in the US.

Airspace is for everyone unless one of the restrictions applies, but police are entitled to ask for evidence of your registration and, where appropriate, qualifications. In some cases you might also want to be able to demonstrate a right to fly (in the same way some photographers carry notes on the ‘right to photograph’ to help them make their case if challenged). More importantly, though, if such a discussion is looming make sure you land before conducting it.

If you’re taking your drone abroad, you’ll need to register with the aviation authority for the country you’re visiting if it is allowed, or follow relevant rules. EU UAV regulation was to be harmonized – the UK rules were designed with that in mind – but the ongoing uncertainty over Brexit means it is unclear UK citizens will actually gain that access.