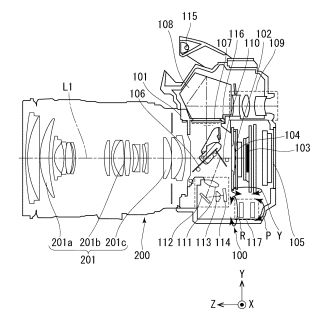 After the full-frame mirrorless Canon EOS R received a great deal of criticism for its lack of in-body stabilisation (IBIS), the company has filed a Japanese patent for a camera-based stabilisation system.

This follows Canon's public explanation for the EOS R's lack of IBIS, asserting that "in-lens IS is the optimum system for image stabilisation".

Intriguingly, however, the technical diagrams in the newly filed patent (P2018-165756A) depict a DSLR body instead of a mirrorless one.

According to the filing (via Google translate), the new technology is designed "To make it possible to prevent roller shake and to prevent shift shake by a simplified structure."

While Canon did allude to us that it was working on IBIS, this was in the context of the EOS R and future iterations of the full-frame mirrorless system. Seeing this patent filed with a diagram of a DSLR raises intriguing questions.

We've no doubt that a pro-grade EOS R is in the pipeline, which will likely feature in-body stabilisation. Is Canon looking to breathe new life into its DSLRs with the same technology? More news as we have it.