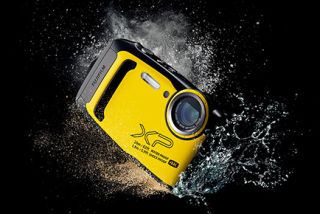 Once upon a time, there weren't many decent budget digital cameras... but nowadays there is a good amount of choice if you are looking for the best camera under $200.

The choice is helped by the fact that as manufacturers release new models, the old ones don't just disappear. The fact of the matter is that while technology does march on, a camera from a few years ago is still a perfectly capable piece of kit, and in many cases can represent better value for money, especially for the casual user. If you don't need 4K video, for instance, then why pay for it?

We've compiled our favorites of the cameras available for around $200 or less right now, and there's a broad mix to choose for. Want a travel camera with a powerful zoom for traveling? A general point-and-shoot that does it all? A waterproof tough compact for underwater adventures? They're all in this guide.

We’ve rounded up the top ten buys from all of the leading camera manufacturers, including Canon, Nikon, Fujifilm, and Sony. There’s even a GoPro camera on the list for those who want an all-out action camera, and 360-degree camera from Ricoh for those who want to experiment with a different kind of imaging. Some of these cameras are new models available at a low price point, others are older cameras that have since been superseded by upgraded models, and therefore can be picked up for a bargain price.

Everything here should be available for less than $200, so let’s take a look at our favourite cameras in this price bracket. And if this is still too dear for you, make sure you check out our list of the best cameras under £100.

This Canon combines a slim build with powerful features

Typical of ELPH cameras, the Canon PowerShot ELPH 360 has a very slim-line and pocket-friendly design. More unusually, it’s available in a particularly garish shade of purple, as well as the more usual black and silver options. For such a small camera, it packs a big punch in terms of features. The 20.2MP ‘HS’ image sensor helps to retain low-noise image quality at high ISO settings, there’s a powerful 12x optical zoom lens, a 3-inch LCD screen, plus built-in Wi-Fi and NFC.

Typical of Canon cameras great and small, the layout of buttons and menus is simple and intuitive. All in all, it’s a great little camera, the only slight frustration being that the 2.5fps maximum burst rate is a little pedestrian.

A slim Sony camera that packs a lot in

Typical for the budget price sector, the camera has a 2.7-inch LCD, but the screen has twice the usual pixel count for a more detailed display. Overall, it’s a very good point-and-shoot camera with impressive image quality. However, if you like to alter shooting settings, the interface can feel a little unintuitive and the menus are a bit longwinded.

Lights, camera, action... this tough Panasonic can handle all of it

Whether you’re on the beach, up a mountain or in the desert, the Panasonic Lumix DMC-FT30 should prove ideal. It’s waterproof down to a depth of 8m, freezeproof to -10C, dustproof, and shockproof to withstand being dropped from heights up to 1.5m. In short, it’s as tough as a brick but sadly looks a bit like one as well, with a very boxy design.

Unlike some ‘tough’ cameras, this one has a zoom lens, which is a nice bonus. Video resolution is a little disappointing but image quality is good and it’s an easy camera to use.

A Nikon for adventurous photographers on a budget

A waterproof choice for those who like a little adventure with their photography, the Nikon Coolpix W150 isn't the most sophisticated camera you'll ever see, but it does its job well enough and is a good choice for family holidays where you might have little ones who won't treat a camera with quite the care you might want them to. The W150 is scrappy enough to take a few knocks, and while it does have a zoom lens, you won't be writing home to anyone about the fairly middling range of 3x. Decent for the price, and the choice of colors is a nice extra.

The latest tough camera from Fujifilm for an active lifestyle

Fujifilm toughened up its tough camera with the latest XP140, which can be taken down to impressive depths of 25m, as well as being freezeproof down to -10ºC and shockproof to drops of up to 1.75m. It's also got tech to back this up on the inside, with impressive burst speeds of up to 10fps, and some useful Scene Recognition modes that help even novice users get the most out of the camera.

All this comes at an excellent price, making the XP140 a seriously tempting option for the budget-conscious photographer, especially those planning some travels. One word of warning though: while the XP140 does technically shoot 4K video, it's at a disappointing frame rate of 15p and doesn't look particularly good. Don't buy it for this feature alone.

At about an inch thick, Sony’s WX350 isn’t quite as super-skinny as the WX220 and it’s a little heavier too. The main reason is that it doubles up on optical zoom range, with a massive 20x capability. Even so, the WX350 is still a very pocketable camera, and remarkably thin considering its zoom range. It’s also a bit more intuitive to use, with the addition of a shooting mode dial on the top of the camera, putting the extra 4mm of body depth to good use.

The rear screen is slightly larger as well but has the same 461k resolution. In other respects, both cameras are very similar, with the same image sensor, 10fps maximum burst rate, Full HD 1080p video capture, Wi-Fi and NFC, along with a slightly fiddly menu system. Again, image quality is very impressive.

How big are your pockets? This capable Canon will stretch them...

The phenomenal 25x optical zoom range of this Canon PowerShot SX620 HS equates to 25-625mm in conventional, full-frame terms. That takes you all the way from ultra-wide-angle to super-telephoto at just the touch of a zoom lever. The downside is that, compared with the PowerShot ELPH 360, this camera is noticeably thicker, with a depth of 28mm instead of just 23mm. Canon still claims that it’s a ‘pocketable’ camera, but it’s not such an easy fit.

Image quality is similarly impressive from both cameras, with gorgeous colour rendition and relatively low image noise at high sensitivity settings. There’s also the same provision of Wi-Fi and NFC. Handling is more refined in the SX620 HX, with a sculpted grip area, and the LCD screen has twice the pixel count as well, for a more detailed display.

An action camera with a new budget-friendly price tag

A growing number of ‘action cameras’ are often quite pricy but this one from the acclaimed GoPro manufacturer squeaks in below our maximum price limit. It has the same physical dimensions as the Hero8 Black and Hero7 Black, and the same provision of a rear LCD for composing shots. In fact, it’s the only camera in this roundup to have a touchscreen.

It also features voice control, which can be very useful if the camera is mounted in place and you’ve got your hands full with adventurous activities. Speaking of which, the GoPro Hero7 Silver is waterproof to a depth of 10m and additional cases are available if you feel the need to dive deeper – as well as other useful GoPro accessories.

Get a completely different perspective with a 360-degree camera

For something completely different, why not try creating 360-degree images and videos? The Ricoh Theta SC 360 is one of the most affordable 360 cameras on the market, and produces really quite excellent images and footage for its price point; it's significantly cheaper than many cameras offering similar functionality. Small enough to take anywhere, it's best used in conjunction with the dedicated app on your smartphone, which allows you to easily take control of the camera's various functions and modes. It's a lot of fun, and a great way to do something different without breaking the bank.