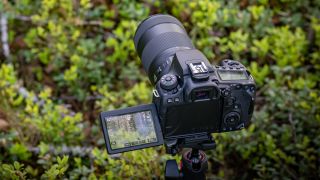 The best DSLR won't be the same for everyone. Beginners will be looking for a low-cost camera that's easy to use, enthusiasts will want a powerful all-round camera that offer many of the tools of pro cameras but without the cost, while professional photographers will want image quality and features, for sure, but durability and dependability too.

What makes the decision harder is the latest developments in competing mirrorless camera designs, so if you're still unsure which type to go for, check out our article on DSLR vs mirrorless cameras.

It's true that DSLRs are not the only game in town. The best mirrorless cameras now offer the same kind of features, lens choice and image quality as a DSLR. But many photographers prefer the size, weight and optical viewfinder of the digital SLR design, and while it has been a lean couple of years for new DSLR cameras, things are turning around!

The new Canon EOS 90D launched in late 2019 proves that camera makers still have faith in DSLRs, boasting as it does the highest resolution yet in an APS-C camera, combined with the kind of live view autofocus technology and performance we're used to seeing in mirrorless cameras only. And now we've had news of the brand new Nikon D780 full frame DSLR, which lifts the autofocus, live view and video technology of Nikon's own Z 6 mirrorless camera and puts it in a DSLR design.

And on the same day as the Nikon D780 announcement, Canon has launched its flagship EOS-1D X Mark III DSLR for professional photographers. This camera boasts the most advanced autofocus yet seen, together with high end video/cinema features many people assumed would only be found in the most advanced mirrorless cameras.

So the DSLR is not dead – far from it! A cheap DSLR camera is still just about the most affordable way for a novice to get into proper photography – and remember that every DSLR has a viewfinder, which is an unusual feature to see on low-cost mirrorless cameras. In fact, you can find DSLRs on our list of best cheap camera models of all types.

We've split our list of the best DSLRs into cameras for beginners, enthusiasts and pros. We've left out the Canon EOS-1D X Mark III and Nikon D5 (soon to be replaced by the D6) out of our list, below, because these are seriously expensive and specialized cameras for pro sports photographers. But if that's where your interest lies, take a look at our guide to the best cameras for professionals.

The perfect DSLR for beginners, students and anyone on a budget

The Nikon D3500 is the latest in Nikon's D3000 series, and we reckon its the best DSLR for beginners. We also rate it as one of the best Nikon cameras right now, as well as one of the best cameras for beginners. Novice photographers are often worried about DSLRs being complicated to use, but the Nikon D3500 has a brilliant ‘Guide’ shooting mode that acts as a fully interactive tutorial on photography, delivered via the rear LCD screen. The rear screen is fixed, and you’re limited to Full HD video rather than 4K, but the 24-megapixel sensor delivers super-sharp images and the retracting 18-55mm kit lens is rather good too. The D3500 is small, light, cheap and easy to use – all the qualities that will appeal to beginners.

If you stretch your budget, you can get 4k and a vari-angle touchscreen

Canon does make a couple of cheaper DSLRs than this one, notably the 18-megapixel EOS 4000D and the 24-megapixel EOS 2000D, but we reckon they’re a little cut down in features and build quality and we’d recommend paying just a little bit extra for the EOS Rebel SL3 DSLR (sold as the EOS 250D in Europe). Why? Because it has a vari-angle touchscreen on the back and a sensor with Canon’s Dual Pixel CMOS AF technology, so the autofocus in live view is really snappy. We also love the fact that you can start from a simple Guided user interface when you’re still learning, and then switch to the standard setup when you feel more confident and want more control. This is the best DSLR for beginners keen to learn and experiment with new techniques – it's also as good in live view mode as a mirrorless camera.

A bare-bones camera that really strips back the cost

Nobody wants to buy an expensive camera only to discover that photography’s not for them. You can limit the risk with this remarkably cheap DSLR and kit EF-S 18-55mm f/3.5-5.6 III lens. It's well suited to beginners, with the same ‘intelligent’ full auto shooting mode and feature guide as you’ll find in pricier Canon cameras. The ‘Quick’ menu is typically intuitive, and there are plenty of scene modes as well as more advanced shooting modes. There’s also a Creative Auto mode to help you progress from ‘basic zone’ to ‘creative zone’ modes. The 18MP image sensor is a little lacking in megapixels compared with most current DSLRs, though, and there are more serious cutbacks in other areas. We wouldn’t expect a touchscreen at this price, but the rear LCD is disappointingly small and low-resolution. Ultimately, it’s a very basic camera but the best DSLR to get if you just want to dip your toe in the photographic water and spend as little cash as possible.

This is the best Canon camera for enthusiasts, and it arrived with groundbreaking specs that no other camera in this category can match and could leave a few professional photographers and videographers taking a look too. The EOS 90D packs in an amazing 32.5 million pixels – the highest yet for an APS-C camera – though don't expect to see any obvious and instant benefit in image quality. Instead, revel in this camera's 10fps continuous shooting capability and its uncropped 4K video capture – a consumer level Canon that (finally) doesn't reduce the angle of view for 4K video. The extra megapixels do dent the EOS 90D's high ISO/low light performance, but this camera has so many capabilities and so much potential, we can forgive a few flaws. Its features and specs make this the best DSLR for enthusiasts.

Nikon fans looking for an all-round equivalent to the do-it-all Canon EOS 90D should take a look at the Nikon D7500. Also designed for enthusiasts, it offers a slightly faster 8fps continuous shooting speed, a proven 51-point autofocus system and the ability to capture 4K video. It has a tilting rear screen rather than the fully-articulated design on the EOS 90D and relies on slower contrast AF in live view mode, but if you do most of your shooting through the viewfinder these will be small points. The D7500 also has a lower resolution (20MP vs 32.5MP) but in real-world shooting its high-performance sensor delivers images which are not far behind the definition offered by the Canon, despite the difference in megapixels. So which is the best DSLR for enthusiasts? Both – depending on whether you're a Nikon or a Canon fan – but the EOS 90D edges it on specs.

The D750 is old but good, and a cheap route into full frame cameras

Full frame DSLRs usually cost a lot more than amateur-orientated APS-C models, but you can upgrade to a full frame system without spending a fortune with the Nikon D750. It’s been around for a while now, but that just means users have had more time to appreciate its value for money, high image quality, especially at higher ISO settings, and all-round versatility. It's also grown a lot cheaper over time! The 51-point autofocus system is highly proficient and metering is very reliable, and it can shoot at a respectable 6.5fps in continuous shooting mode. The D750 is still Nikon’s most appealing and affordable all-rounder for many photographers and a great buy for enthusiasts who want to step up to full frame photography – it's one of the ten cheapest full frame cameras you can buy right now. The new Nikon D780 does beat it for live view autofocus and video, but it's also a lot more expensive. We haven't been able to test this brand new camera yet, but as soon as we do, we could be adding it to this list!

We like the Nikon D750, but the EOS 6D Mark II is a newer model with some very impressive features of its own. The 26-megapixel sensor is good rather than great, but it does have Canon’s Dual Pixel CMOS AF system, so the live view autofocus is very fast and effective. The 45-point viewfinder AF system is pretty good too, although the focus points are all clustered towards the centre of the screen. The EOS 6D Mark II can capture images at 6.5fps in burst mode, just like the Nikon D750, but sneaks ahead with its extremely useful vari-angle touchscreen display. If you can find the extra cash, it's the one we'd recommend. The new Nikon D780 is a strong rival, however, as we will soon be testing it to see how it compared to the EOS 6D Mark II.

APS-C format DSLRs offer the best compromise between features, quality and price, but professionals will demand a step up in image quality, and that means a full frame DSLR. The Nikon D850 is an expensive camera (though prices are falling), but its capabilities put it in a class of its own. Its 45.7MP resolution is spectacular, it has the same high-tech metering and autofocus modules fitted to Nikon’s high-end D5 and D500 DSLRs, as well as an upgraded autofocus system with 153 instead of 53 points, and can capture images at 7 frames per second – or 9fps with the optional MB-D18 battery grip. Amazing video features also makes it one of the best 4K camera choices around – though the new Nikon D780 could prove a better (cheaper) choice for videographers. The Nikon D850 doesn't have Canon's Dual Pixel CMOS AF, so live view shooting and filming relies on slower contrast AF, but that scarcely puts a dent in the D850's all-round appeal as arguably the best DSLR of all for professional photographers.

The EOS 5D Mark IV is Canon’s all-time best DSLR camera if you want a reasonably high megapixel count without sacrificing too much in the way of continuous drive speed, and clean, noise-free image quality at very high ISO settings. On paper, its features look unspectacular compared to the Nikon D850’s, but for many pros the 30MP resolution is more than enough – and the 4K video makes it regarded as the best camera for filmmaking by many users, even if there is quite a severe crop factor. Canon’s Dual Pixel CMOS AF gives the ESO 5D Mark IV perky autofocus performance in live view and video modes, too. It’s proved itself versatile, robust and reliable – all major plus points for pro photographers.

Pentax makes only one full-frame DSLR, but it's a cracker!

Typical of most Pentax DSLRs, the range-topping Pentax K-1 Mark II is solid and dependable, with a tough, weather-sealed construction. It also has highly effective sensor-shift image stabilisation system that works with any attached lens, unlike competing Canon and Nikon DSLRs. Better still, the 5-axis stabilizer can work in trick modes to deliver anti-aliasing correction, an increase in fine detail and texture based on Pixel Shift through multiple exposures, and even an Astrotracer mode to avoid stars appearing to streak through the sky. With a 36MP full-frame image sensor, the K-1 Mark II certainly gives you a lot of megapixels for the money, though the 33-point autofocus system does feel dated, and Live View autofocus is poor. Even so, this camera gives you a lot of features and performance for the money.