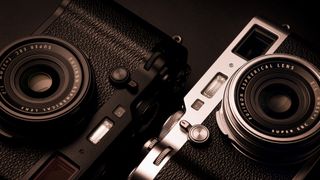 Camera phones have annihilated the conventional compact camera market, so for a standalone compact to really stand out these days, it needs to deliver clearly superior image quality. The best way to achieve this is to fit a big image sensor, and there's a decent selection of cameras packing large APS-C-sized sensors that can outgun even the best camera phone for image quality. With an APS-C compact, you're essentially getting DSLR image quality from a camera that can fit in a jacket pocket.

APS-C compact cameras are almost the perfect blend of performance and practicality - only a full-frame compact camera can produce better image quality. However, there are a couple of potential drawbacks to consider before you buy. A bigger sensor traditionally requires a larger lens, so to minimize bulk, most APS-C compacts have a fixed focal length lens, although Canon has managed to equip its APS-C G1 X Mark III with a 3x zoom lens.

Assuming you can live without much/any optical zoom, the only other consideration with an APS-C compact is battery life. APS-C sensors are relatively thirsty, which isn't a problem when they're powered by a beefy DSLR battery, but a compact camera only has space for a compact battery, resulting in a short battery life of around 200-250 shots.

The G1 X Mark III packs a 24.2MP APS-C sensor, but unlike the fixed focal length Fuji and Ricoh APS-C cameras, Canon’s top-line compact stands out by sporting a 3x 24-72mm-equivalent zoom lens. The f/2.8 max aperture is also impressive, but that’s only at 24mm - by 72mm it’s shrunk to a more modest f/5.6. The lens is remarkably compact though, with minimal lens protrusion. There’s just room for a zoom ring around the lens, although this does operate electronically and with an annoying lag.

Otherwise the camera handles well and build quality is solid. There’s a generous sculpted grip on the front and rear, while both the 2,360k-dot OLED EVF and 3-inch, 1,040k-dot vari-angle screen are a pleasure to use, with the latter being touch-sensitive.

Canon’s excellent 49-point Dual Pixel AF is DSLR-fast and accurate, and the speed continues with up to 9fps burst shooting. As you’d expect for an APS-C sensor, image quality is high, with great detail reproduction and dynamic range in good light. Low light shots are just as impressive due to well-controlled noise, while the lens is sharp and distortion-free.

A lovely camera to look at and use

It’s easy to fall for the X100F thanks to its sexy retro styling, abundance of manual controls and stellar build quality. Then there’s the superb hybrid viewfinder that can be switched between an optical finder and a 2,360k-dot EVF, giving you the best of both worlds.

The X100F’s 325-point AF speed has been criticised, but it's snappy enough in 91-point mode. More annoying is the 35mm-equivalent fixed focal length lens which, while sharp and fast, gives a frustratingly narrow field of view, although a 28mm converter is an option.

This is also a surprisingly bulky camera given its fixed focal length lens, especially next to a camera like the Ricoh GR III, which packs the same sized sensor. Even so, few other cameras give such a rewarding shooting experience.

It's the latest in a classic line, but it's starting to show its age

Despite its fairly large APS-C sensor, the GR III is impressively compact at only 109.4 x 61.9 x 33.2mm, and it’s also amazingly light at just 257g. The sculpted front grip makes it feel secure in the hand, and there’s a full complement of rear panel buttons, as well as multi-function front and rear control wheels.

The GR III’s 24.2MP sensor is a healthy upgrade on the 16.2MP resolution offered by the old GR II. The new sensor even manages to generate slightly cleaner images with less image noise when compared to the GR II throughout the sensitivity scale. Dynamic range is also very respectable right up to ISO 12,800 and is marginally superior to both the GR II and Canon's G1 X Mark III.

It’s a pity there’s no built-in viewfinder or flash though, and the all-plastic body, though very solid and in-keeping with the long-established GR aesthetic, lacks a premium feel.

Like Fujifilm's X100F, the XF10 incorporates an APS-C sensor with a 24MP resolution, however it uses a more conventional Bayer sensor design rather than Fujifilm's signature X-Trans CMOS architecture.

The sensor is fronted by a fixed Fujinon 18.5mm f/2.8 lens with an effective focal length of 28mm in 35mm camera terms - it's appreciably wider than the lens on the X100F, and has been designed with a useful 10cm close-focusing distance for macro photography. An additional Digital Teleconverter feature also allows focal lengths equivalent to 35mm and 50mm to be used too, albeit at the expense of sensor resolution.

The XF10's build is more comparable with the plasticy Ricoh GR III than the premium X100F, but at just 279g ready to shoot, the XF10 is almost half the weight of its Fujifilm sibling. It’s also significantly smaller at just 112.5 x 64.4 x 41mm, though that's still not quite as compact as the ultra-portable GR III.