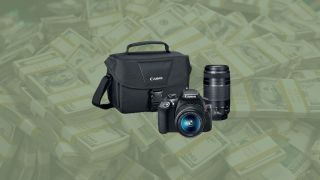 If you simply can't wait until Black Friday or Cyber Monday to get your hands on a camera and two lenses (a standard and telephoto zoom lens) that are perfect for budding photo enthusiasts, then look no further... The Canon EOS Rebel T6 DSLR (also known as the Canon EOS 1300D) is now available bundled together with two great lenses for just $399 – that's a massive saving of $350!

The Canon EOS Rebel T6 / Canon EOS 1300D comes with in-built Wi-Fi and NFC connectivity, which enables you to control the camera from a connected device, such as a smartphone or tablet. You can also send images from the camera to your devices to share quickly online.

The Canon EOS Rebel T6 has fully automatic and scene shooting modes. It also offers Full HD (1920 x 1080) video recording, and you can take manual control of video, with 30, 25 and 24fps frame rates available. And the battery life of 500 shots should last a whole day of shooting.

With such a great deal, why wait until Black Friday? Get your hands on the Canon EOS Rebel T6 and two great lenses today!