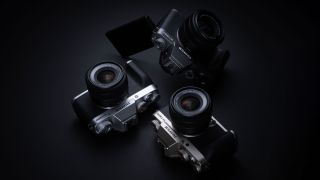 Before we tell you the best Fujifilm camera, we need to ask you one question. What kind of photographer are you? Fujifilm's X-mount mirrorless cameras are designed for keen novices through enthusiasts and independent content creators, right up to professional photographers.

But the company also makes compact fixed lens cameras for family snappers right through to experts, and medium format (large sensor) cameras which have completely changed the professional camera market.

Fujifilm is rightly known as one of the best brands around for mirrorless cameras (something that no one would have a predicted before the firm's shock turnaround a decade ago). These X-mount cameras are stylish, sleek and full to the brim with the latest imaging tech. Fujifilm has also filled out its range with professional models, entry-level cameras and everything in between.

The more advanced models like the brand new X-T4 and the smaller X-T30 look and act a little like mini-DSLRs, with a conventionally placed (electronic) viewfinder, while the entry-level models like the Fujifilm X-A7 have a smaller rectangular shape and ditch the viewfinder.

Some newer models are focused on bridging this gap, such as the brand new X-T200. The new X-T200 combines novice friendly design features like a large vari-angle touchscreen display with the electronic viewfinder and powerful autofocus and video features found on the more advanced cameras.

There is an ever-increasing number of X-mount lenses for these cameras, and you can check out the best Fujifilm lenses in our separate guide.

But there is plenty more to consider. High-end users will want to consider the fact that Fujifilm has also pioneered the introduction of medium-format digital cameras into the mainstream market, and we've included the big but beautiful GFX 50R and the expensive but ground-breaking GFX 100 in our list.

Or, do you need something hardy for your holidays? If so, Fujifilm maintains a line of underwater cameras. Would you rather not worry about changing lenses? Fujifilm makes some of the best compact cameras for enthusiasts, and we've included our favorites in this list.

The best Fujifilm camera in 2020

The X-T30 is small, compact, well made and remarkably powerful

Right now, the Fujifilm X-T4 is the most powerful camera in Fujifilm's X-mount camera range, but we rate the smaller X-T30 as the better buy for the majority of photographers. It's the replacement for the much-loved Fujifilm X-T20, with slightly more resolution, vastly improved autofocus and the ability to shoot at up to 30fps with its electronic shutter and 1.25 crop mode. It's like a mini-version of the X-T3, but it's a lot smaller, a lot cheaper and doesn't give away that much in either features or performance. The 4K video capabilities are improved too, and while the X-T30 can't quite compete with the bigger X-T4's professional level video capture, its autofocus is actually slightly more advanced. If you want a small, affordable, all-round APS-C camera that's right at the cutting edge with image quality and features, this is it. We reckon you'll also be charmed by the X-T30's old-school external shutter speed dial and exposure controls. Hey, Fujifilm – anytime you want to bring out that X-T40 is just fine with us.

The most powerful APS-C mirrorless camera you can get

It's early days, but the Fujifilm X-T4 could be the new benchmark by which all mirrorless cameras are judged. The X-T3, first announced in 2018, was already a seriously impressive camera, lacking only a few key features – in-body image stabilisation and a vari-angle touchscreen. The X-T4 simply adds those in, building on what came before to become one of the best mirrorless cameras around. It still has the sophisticated 26.1MP X-Trans sensor, the super-fast autofocus and the capacity to shoot 4K video. Fujifilm have even improved the shutter over the X-T3, producing a model that lasts longer and can achieve higher sustained burst speeds, and also swapped out the battery for a newer model that lasts much longer. There's really very little to criticise on a camera like this, and if your budget stretches this far, you really can't go wrong here.

We loved the concept of the X-T100, as a kind of bridge between the high-end professional X-series models and the more entry-level shooters, so it was great to see the release of the X-T200, which builds on that concept while fixing a few of the issues with the original. Video has been vastly improved on the X-T200, with 4K now topping out at a frame rate of 30p rather than the X-T100's 15p. Sensor-wise, while you're still not getting the X-Trans chip used on the higher-end cameras, the X-T200's 24.2MP APS-C CMOS model is nothing to sniff at, and additional features like 8fps burst shooting do a lot to sweeten the deal. The camera tends to be bundled with the XC15-45mm F3.5-5.6 OIS PZ kit lens, making it a great starter choice for anyone considering their first Fujifilm camera. The big, vari-angle screen is great and the improved 4K video is a big step forward over the X-T100, but it's a pity the price has gone up.

Perfect for beginners, fashionistas and Instagramers

The Fujifilm X-A7 has a gorgeous retro design with some really clever touches, like its 180-degree tilting touchscreen and Portrait Enhancer for selfies, as well as an advanced autofocus mode that finds the subject's eye. As we’ve come to expect in X-series cameras, there’s 4K movie capture at 30fps (improving on the spec of the older, heavier X-A5). The megapixel count for stills is pretty impressive at 24.2MP but, in keeping with the compact lightweight design, there’s no viewfinder, so you have to rely on the large 3.5-inch LCD for composing shots. With more stamina than various other X-series cameras, this one has a battery life of upto 440 shots. If you're moving up from a smartphone, you won't miss the viewfinder but you will love the image quality.

The retro classic with a unique viewfinder

Also a thing of beauty, and right at the top end of the price scale, the Fujifilm X-Pro3 attempts to recapture the handling and shooting experience of classic rangefinder cameras but with the latest digital technology. The new model improves on the previous X-Pro2 with Fujifilm's latest 26.1MP X-Trans sensor, improved autofocus and a unique rear screen design which folds flat against the body in normal use to 'hide' the picture you've just taken and display instead a digital representation of the film packet lids we used to slot in the backs of our film cameras – one for each of Fujifilm's Film Simulation modes! You can flip the rear screen downwards for image playback and shooting, as it happens, so this isn't quite as radical a design as it sounds, but the hybrid electronic/optical viewfinder is still unique to Fujifilm cameras and what helps set this camera apart as a photographic tool. This is a camera you buy for the experience of using it, though – it's an expensive indulgence!

The original X100 was the camera that heralded the beginning of the X series and the revitalising of Fujifilm's fortunes: a retro-styled compact with a street-friendly fixed lens of 35mm equivalent. In four subsequent X100 releases, Fujifilm has not yet deviated from this sublime formula, and accordingly the X100V is a truly wonderful day-to-day snapper that'll help you fall in love with photography again. Pairing a 26.1MP APS-C sensor with a slim, pocketable body, it's a camera that can go everywhere with you. It even finds space to borrow the gorgeous hybrid viewfinder from the X-Pro3, marking this camera out as a premium compact firmly for the enthusiast (as also reflected by its price tag).

It's like an X100F but less than half the price

If you love the idea of the Fujifilm X100F but you're not so keen on the price, the little XF10 could be the answer. It's a much more modest camera, without the viewfinder of the XF100 or its old-school shutter speed and lens aperture dials, but the XF10 does still have a 24-megapixel APS-C sensor and a very handy 28mm equivalent f/2.8 lens. Its two really appealing features, however, are its extra-slim body – which can easily slide into a jacket pocket, or even a trouser pocket – and its much lower price. It's easy to focus (sorry!) on its slightly sluggish autofocus and limited features, but where else will you get a pocket-sized premium quality APS-C camera at anything like this price? Surprisingly, the XF10 doesn't seem to have captured the public's attention like Fujifilm's other cameras, but we think at this price it's terrific.

Fujifilm's cameras aren't all high-end models aimed at high-minded photographers. The design of the Fujifilm FinePix XP140 is fun and kid-friendly, making it a solid choice for family holidays, but this doesn't mean it skimps on imaging tech. It's a capable little camera, able to shoot 4K video (albeit at a disappointing 15p) and equipped with an impressive 5x optical zoom lens with an equivalent focal range of 28-140mm, and all this comes at an extremely friendly price tag. A new scene recognition mode helps the XP140 assess what it's photographing (which goes some of the way towards compensating for a lack of manual controls), and the controls are well laid-out and easy to use, even when in murky underwater conditions. For the price, this is a great camera for families, beach holidays and underwater adventures.

The GFX 100 wins for resolution, but the GFX 50R is much cheaper

Unlike practically every other camera maker, Fujifilm does not make full frame cameras. Instead, it leaps straight from its APS-C models like the X-T30 and X-A5 to a much larger medium format sensor in its GFX models. The first was the GFX 50S, but we really rate the newer GFX 50R, not just because it has a neater rectangular shape but also because it's only three-quarters the price! OK, so the price tag looks excessive compared to regular cameras, but it's a breakthrough for medium format cameras – and the larger sensor delivers a level of image quality that just blows you away the first time you see it (and for a long time after that, too). It's big, it's heavy, and it's not that fast to use, but it's designed for a more considered kind of photography. The GFX 100 (next on our list) doubles the resolution and adds faster AF and in-body stabilization... at a price!

It's expensive, but not for medium format. It's also quite exceptional

We can't put the GFX 100 at the top of this section because its size and its price put it well beyond the scope of the average photographer. But in the world of medium format photography (sensors larger than 35mm full frame), it's a positive bargain. It's also a groundbreaking camera that changes our expectations about what medium format cameras can do. Its 100-megapixel resolution has challenged our own testing procedures, its in-body stabilisation is a medium format first, and its hybrid AF (thanks to a recent firmware update) is a huge step forward. On the downside, while the in-body stabilisation is valuable extra insurance against camera shake, you'd be unwise to rely on it, and while the body is relatively compact, when it's matched up with Fujifilm's medium format glass, the combination gets quite tiring for prolonged handheld use. But this camera's image quality is simply spectacular, and once you've seen what it can do, any handling quibbles are instantly forgotten.