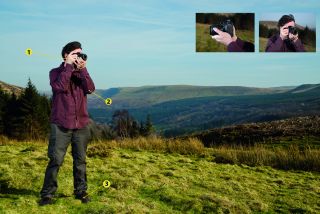 It may not seem that important, but how you hold your camera, how you position your body, and even how you stand can all have an effect on the sharpness of your images.

These things also affect the way you can access all of the camera controls easily, so it pays to check that you’re getting the basics right – otherwise you could end up having to break bad habits, which is often much more difficult.

There are some general rules for the best way to hold your camera, but everyone is slightly different, so use this as a guide. If it doesn’t feel comfortable, try slightly varying the position of your hands, arms or feet, until you find the most comfortable position.

Assuming you're using a camera with a defined grip, the bottom three fingers of your right hand should be positioned around this. You need to have a reasonably solid grip, but don’t grip it too tightly as this can quickly become uncomfortable and also cause camera shake.

This often takes a little more getting used to, so try practicing this.

Try to make sure that your feet are about a shoulders’ width apart. You may find it more comfortable and steadier to have one foot slightly in front of the other, rather than completely parallel.

Other things to try

Use these shooting techniques to reduce camera shake

Don’t be tempted to take a deep breath before you fire the shutter, or hold your breath, because both of these can create tension in your muscles. Simply breathe normally, and for the best results try to fire the shutter just after you’ve exhaled. But most of all try to stay relaxed, and squeeze the shutter smoothly, rather than stabbing at it harshly.

What is camera shake?

How can you tell if an image is blurred due to shake, or due to other reasons?

Camera shake occurs when the camera moves during the time that you’re taking a shot. It will make the image look blurred, and in severe cases you’ll notice a streaky appearance in the image.

Four methods you can use to avoid camera shake

As well as giving you a slightly lower viewpoint, kneeling down to take a shot can also help you to combat camera shake.

When you’re in position, you can rest your left elbow on your knee to help stabilise the camera, which is particularly useful when using longer focal lengths.

The extremely low angle created by lying on the floor won’t suit every type of image, but if it does, this position gives a really stable platform.

It can allow you to shoot at much slower shutter speeds than normal, while still avoiding camera shake.

If you need to use a slow shutter speed without a tripod, and you can’t kneel or lie down, look for an object around you to brace the camera against.

In an urban environment you’ll find lamp posts, walls or other street furniture, while in the country you can use trees, rocks or fences.

Even though there are other ways to get sharp shots at slow shutter speeds, a tripod is still the best and most reliable way of ensuring sharp pictures.