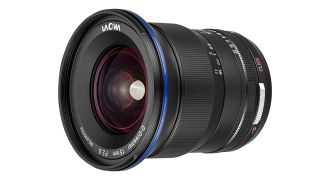 The Laowa 15mm f/2 FE Zero-D boasts a 110° angle of view and a close-focusing distance of 15cm, and can be used across both full-frame and APS-C bodies in Sony’s E-mount system.

Despite its wide focal length and fast maximum aperture, the company has managed to get the lens to a weight of just 500g, and a length of 8cm. The lens doesn’t incorporate its own focusing motor, however, so all focusing must be performed manually.

Appearing to be targeted towards landscape and astrophotographers, the optic comprises 12 individual elements across 9 groups, three boasting extra-low dispersion properties.

Thanks to the further use of two aspherical elements, the company also claims the lens offers “close-to-zero” distortion when focused at infinity. This is the second time the company has made such a claim for one of its optics, following the release of the 12mm f/2.8 Zero-D in 2016.

As with that lens, the company has applied Frog-eye coating (yes, you read that correctly) to the front element. This is said to repel water droplets, which is particularly useful given the likelihood of it being used outdoors.

The company states that it also intentionally designed the lens with a relatively flat front element, in contrast to the dome-shaped profile of many other ultra-wideangle lenses. This allows for front-mounted, screw-in filters to be used, something that’s not possible with similar lenses that have a more bulbous front, with filters attached via a 72mm filter thread.

To broaden its appeal towards videographers, the lens has also been designed with an aperture ring that can be alternated between clicked and de-clicked positions. The latter option is often preferred by video shooters, as it allows for changes to be made to aperture during recording, without operational sounds being picked up.

The Laowa 15mm f/2 FE Zero-D will be available either towards the end of August or start of September. If you fancy seeing what it’s capable of, scroll down for sample images or check out the time-lapse above.