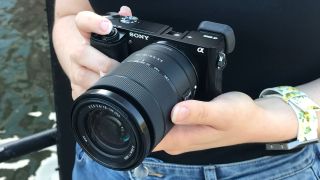 The Sony A6000 and its successors are among the best-selling mirrorless cameras of all time, and is still a fantastic buy even though many subsequent models have been released in the same series: more so, actually, as this means its price has come down and it's among the best camera deals you can get today.

The Sony A6000 has evolved into one of the most advanced APS-C camera series around. It's all about speed, boasting a super-fast hybrid phase/contrast-detection autofocus system and a blistering 11fps burst shooting rate. Sony doesn't skimp on image quality either, with the A6000 capable of producing excellent stills with its APS-C sensor, and handling and ergonomics are well refined. The A6000 packs in an OLED viewfinder and a hinged rear screen, and its body is robust, small and lightweight enough to take pretty much anywhere and everywhere. In short, the A6000 represents everything that's great about mirrorless cameras.

Since 2014, many more cameras have arrived in the A6000 series, adding various enhancements, like face tracking, 4K video and even in-body image stabilization (A6500 and A6600).

All of them, including the A6000, are still on sale today, often bundled in a kit with Sony’s E PZ 16-50mm F3.5-5.6 OSS. While this is a sensible choice of lens to start with, with a retractable design that enables a particularly small and light stowage size, if you want to get the most out of these cameras, you need to think about how to upgrade.

An outstanding standard zoom (it makes sense, trust us)

Brilliantly engineered, inside and out, the Sony E 16-55mm f/2.8 G Lens has been a welcome sign that Sony really is taking its APS-C range seriously as professional photographic tools. It's a fantastic workhorse lens with a focal ranger suiting a huge range of applications and a constant f/2.8 aperture that lends it real versatility in all different shooting situations. Whatever your plans for your A6000-series camera, this lens will keep up with them and enable you to produce superb images, rich with detail. Our only real gripe is the lack of optical image stabilisation; as long as you can get past this, it's an absolutely superb lens that deserves a spot in all Sony APS-C users' kit bags.

The perfect step up from the Sony E PZ 16-50mm F3.5-5.6 OSS kit lens that’s sold with the A6000, this is a much higher-quality optic. It’s based on a Zeiss design that includes four aspherical elements and one ED (Extra-low Dispersion) element, as well as Zeiss’s high-performance T* coatings. It lacks the space-saving, retractable mechanism of the 16-50mm lens but gives a greater overall zoom range, along with a constant-aperture design that makes f/4 available at any focal length. It’s not as ‘fast’ as the more pro-grade Sony 24-70mm f/2.8 G Master but is much more compact and affordable. Weighing in at 308g, it feels perfectly balanced on an A6000 body and is absolutely ideal for daily shooting.

The choice of standard zoom lenses for Sony's APS-C mirrorless cameras is narrower than you'd expect. The 16-50mm 'pancake' standard zoom sold with many A6000-series cameras is very small and convenient but not terribly good optically. Otherwise the Zeiss Vario-Tessar (above) is a good buy but has a constant f/4 maximum aperture, and while the brand new Sony E 16-55mm F2.8 G fixes that with a constant f/2.8 aperture, it's big and expensive... and none of them have much of a zoom range. This is why we really rate the Sony E 18-135mm F3.5-5.6 OSS. It's compact, neat and affordable, it offers a really good zoom range and – unlike almost every other long-zoom lens – it holds it performance even at full zoom. If you use a raw processing program that doesn't automatically apply lens corrections you'll see how much the digital corrections are needed, but if that's the price you pay for this level of optical quality, we'll take it!

Best wide-angle zoom for Sony A6000

Fit this lens to your A6000 and it can feel like taking the blinkers off your camera. The shortest focal length of 10mm is equivalent to using a 15mm lens on a full-frame camera, delivering a massive viewing angle of 109 degrees. The lens is very similar to the Sony Vario-Tessar T* E 16-70mm f/4 ZA OSS in terms of layout and handling, with a constant-aperture f/4 rating and Optical SteadyShot built in. Ideal for cramped interiors, sweeping landscapes and any time you want to exaggerate the effect of perspective, this lens takes over where the 16-70mm leaves off, with a bit of overlap to play with. Image quality is very good apart from slightly mediocre sharpness when shooting wide-open at f/4, mostly in the longer half of the zoom range.

A useful telephoto with real range

Considering how new this lens is and its impressively broad telephoto zoom range, the price it's set at is incredibly reasonable. It's well-suited to a huge range of fast-paced photographic genres like wildlife and sports, making it a perfect partner for the speedy A6000 cameras. Its optical design includes an aspherical element and three extra-low dispersion elements, all of which contribute to superb image quality right through the zoom range. Controls are customisable too, and Optical SteadyShot expands usability in low light. A fantastic lens for a great price.

Costing only about a third of the price of the Sony 16-70mm and 10-18mm lenses we’ve looked at so far, this one maintains a fairly compact and lightweight build, especially considering that it’s a telephoto lens. Thanks to the 1.5x crop factor of the A6000 and other Sony APS-C format E-mount camera bodies, the lens gives an ‘effective’ zoom range of 82.5-315mm in full-frame terms, with powerful telephoto reach at the long end. Downsizing is mostly thanks to the fairly narrow aperture rating, which shrinks from f/4.5 to f/6.3 as you extend through the zoom range. Physically, it enables a much better balance on an A6000 camera than lenses like the more-upmarket Sony FE 70-200mm f/2.8 and f/4 constant-aperture lenses, which are also much more expensive to buy. However, sharpness from the lightweight 55-210mm drops off a bit at longer zoom settings and could be better at the widest available apertures.

Fast supertelephoto lenses on full frame cameras are always expensive, and the Sony FE 200-600mm F5.6-6.3 G OSS is no exception, but compared to fast supertelephoto primes it's actually not THAT expensive, and probably just about falls within an achievable price range for keen amateurs. Strictly speaking, this is a full frame FE lens, but it will work just as well on an APS-C A6000-series camera, where it gives a huge effective focal range of 300-900mm! When you’re shooting wildlife, birds, aircraft or sporting action and you can’t get as close as you might like, this lens really covers the distance. Designed for Sony’s full-frame E-mount cameras, it picks up the baton from our previously recommended Sony FE 100-400mm f/4.5-5.6 G Master OSS, extending the telephoto reach by 50 per cent, with virtually no compromise in all-round performance and at a substantially lower price.

A mere slip of a thing, this pancake lens measures just 63x20mm and weighs a mere 69g. Couple it with an A6000 and you have a perfect package for street photography. The effective focal length of 35mm is ideal, and the outfit is small enough for you to shoot candidly without drawing attention to yourself. It’s one of the few lenses in our roundup that lacks Optical SteadyShot but the f/2.8 aperture rating is faster than that of most zoom lenses. The only catch is that, when shooting wide-open, sharpness is merely good rather than great and vignetting (darkened image corners) is quite noticeable. At apertures of between f/4 and f/8, image quality really comes alive.

Best standard prime for Sony A6000

The so-called ‘nifty fifty’ is a highly popular lens category on full-frame cameras, where it gives a standard viewing angle and natural perspective. Take the 1.5x crop factor of the Sony A6000’s image sensor into account, and this lens has an almost identical 52.5mm focal length and typically fast aperture of f/1.8. The design makes perfect sense, as the lens would need to be substantially bigger and heavier if it had an f/1.4 aperture rating, and less well balanced on cameras like the A6000. Sharpness and contrast are excellent, thanks in no small part to quality glass that includes two aspherical elements and an ED (Extra-low Dispersion) element. For handheld shooting under dull lighting, Optical SteadyShot is another bonus.

Perfect portrait lens for Sony A6000

With an effective focal length of 75mm on an APS-C format Sony body like the A6000, and a fast f/1.8 aperture, this is a great lens for portraiture. You’ll be able to take head and shoulders and half-length portraits from an ideal distance, not crowding your sitter while being close enough to engage with them. The f/1.8 aperture enables a tight depth of field, so you can throw the background out of focus and make the person you’re photographing really stand out in the image. Corner-sharpness is a little poor at apertures wider than f/5.6 but that shouldn’t be an issue in portraiture. The aperture remains fairly well-rounded when stopping down a little from f/1.8 but, based on seven rather than nine diaphragm blades, it could be better.