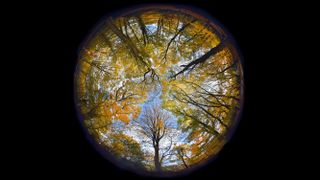 The big idea behind fisheye lenses was to given an enormous viewing angle – much wider than a normal wide-angle lens – that would take in the whole sky. They were invented to enable meteorologists to keep a watch on the weather, but soon found favor with creative photographers.

Whereas regular wide-angle lenses have a rectilinear design that aims to keep distortion to a minimum, the curvilinear nature of fisheye lenses produces extreme barrel distortion, giving a bold and unique look to images.

But what is the best fisheye? The first thing you need to realize, is that here are two main types of fisheye lens… full-field diagonal fisheyes, and circular fisheyes.

Diagonal fisheyes (also sometimes confusingly called ‘full-frame’ fisheyes) produce an image circle that’s large enough to cover the entire image sensor. Whether designed for a full-frame or crop sensor camera, the resulting image has a regular, full-sized rectangular shape. However. It only gives a 180-degree viewing angle when measured on the horizontal of the frame.

Circular fisheyes produce a smaller image circle that fits within the boundary of the image sensor. In this case, you end up with a smaller, circular image but with an even wider viewing angle, equating to a full 180-degrees in both vertical and horizontal planes.

The vast majority of fisheyes are prime lenses but, as you’ll see from our guide, Canon and Nikon make notable exceptions in the shape of zoom lenses that deliver circular or diagonal fisheye effects at either end of the zoom range.

The next most important thing, of course, is getting a mount that is compatible with your DSLR or mirrorless camera. But also (for Canon and Nikon shooters) choosing a lens that works best with the camera's sensor size.

Why choose a circular or diagonal fisheye when you can have both?

On a full-frame Canon SLR, this lens works as a circular fisheye at its shortest 8mm focal length. Zoom to the 15mm end of the range and it becomes a diagonal fisheye that still gives an extremely wide viewing angle, complete with the pronounced barrel distortion associated with curvilinear lenses. It's an easy lens to live with, especially as it's like having two fisheye lenses in one. Because the bulbous front element protrudes from the lens, a two-stage lens cap is supplied, the barrel section of which also acts as a lens hood when used at 15mm. However, you need to remove it when shooting at shorter focal lengths.

With circular and full-field options, this is the best fisheye lens for Nikon

Something of a ‘me too’ lens from Nikon, this is a copy of the genre-busting Canon fisheye zoom lens, launched seven years earlier. The zoom range is identical, enabling the lens to act as a circular fisheye at the short end, and as a diagonal fisheye at the long end. Both lenses have electromagnetic aperture control and, while this is the case in all Canon EF lenses, it’s a newer development for Nikon F-mount lenses, raising incompatibility issues with some older bodies. Unlike the Canon’s constant-aperture design, the Nikon has a variable aperture rating that shrinks from f/3.5 to f/4.5 as you extend through the zoom range. Nano Crystal Coat helps to keep ghosting and flare to a minimum and the supplied lens hood can be used at the longest zoom setting. Image quality is excellent throughout.

Unlike the Canon and Nikon 8-15mm fisheye lenses that zoom from a circular to diagonal fisheye effect on full-frame bodies, this Tokina delivers sensor-filling diagonal coverage at all zoom settings. It’s designed for APS-C rather than full-frame SLRs, where it gives a 180-degree viewing angle at its 10mm focal length, shrinking to 100-degrees at 17mm. The viewing angles are much wider than when using the 10-17mm range of a rectilinear wide-angle zoom, and images shot with the Tokina have the trademark extreme barrel distortion of curvilinear lenses. Even so, the fisheye effect is lessened at the long end of the zoom range. Exposure control is fully automatic in both Canon and Nikon mount editions, but the Nikon-fit version lacks an internal autofocus motor, so only manual focus is available on bodies from the D3xxx and D5xxx series and older entry-level SLRs.

Exactly the same size and 30g lighter than Sigma’s 8mm circular fisheye for full-frame cameras, this 15mm lens is a diagonal fisheye, effectively filling the image sensor of full-frame Canon and Nikon cameras, while adding Pentax and Sony A-mount options to the list. The built-in hood gives protection to the bulbous, protruding front element and a two-part lens hood enables the fitment of screw-in filters if you don't mind losing some of the image to vignetting. Alternatively, there’s a slot in the lens mount for using gelatin filters. Image quality is very good overall and there’s surprisingly little vignetting, given the fast aperture rating

Although designed exclusively for DX camera bodies with APS-C sized image sensors, the Nikon 10.5mm lacks an internal autofocus motor. Instead, it relies on a screw-drive from the host camera, making autofocus unavailable with bodies like D3xxx, D5xxx series and older entry-level SLRs. It’s not as much of a problem as you might think, as the depth of field delivered by a fisheye lens is enormous, so manual focusing is relatively painless. The lens is very compact and lightweight yet well built. Image quality is similarly impressive, with good sharpness even towards the extreme corners of the frame, although color fringing can be noticeable if uncorrected.

Best full-frame fisheye for Sony cameras and more besides

Despite being a diagonal rather than circular fisheye lens, this Samyang has a very bulbous and protruding front element. Thankfully, it’s reasonably well protected if you fit the supplied bayonet-fit hood. The lens has a tough aluminum alloy barrel, while optical highlights include three ED (Extra-low Dispersion) elements and nano-structure coatings.

Although designed for full-frame cameras in mount options that include, Canon, Nikon, Pentax and Sony, Samyang also market the lens in Canon M, Fujifilm X, Micro Four Thirds and Samsung NX editions. Image quality is similarly impressive in all options although, naturally, the diagonal viewing angle of 180-degrees on a full-frame body is reduced to around 124 degrees on APS-C format bodies, and just 97 degrees on Micro Four Thirds. As well as being a manual-focus lens, aperture control is also manual, apart from in the Nikon version which includes electronics to enable a full range of camera-driven PASM shooting modes. The lens can also be found sold under the Rokinon brand.

Best diagonal fisheye for crop sensor cameras, with or without hood

This is essentially a crop-sensor version of the Samyang 12mm f/2.8 ED AS NCS diagonal fisheye for full-frame cameras. As such, it has a shorter focal length to enable a similar 180-degree viewing angle, measured on the diagonal of the frame. Mount options are many and varied, including Canon EF-S and EF-M, Fujifilm X, MFT, Nikon DX, Pentax K, Sony A, Sony E and Samsung NX. Conversely, while the Samyang 12mm full-frame compatible lens is marketed in a selection of mount options that only feature crop-sensor cameras, this crop-format lens can also be used on full-frame bodies, where available in the camera range. With this in mind, a ‘DH’ (detachable hood) option has recently been added. Both versions are optically identical but the DH edition avoids vignetting when shooting with a full-frame camera. This lens is sold under the Rokinon brand in North America.

Whereas lenses like the Lensbaby circular fisheye and Samyang 8mm diagonal fisheye are available in a Micro Four Thirds mount option, this Panasonic diagonal fisheye is designed exclusively for MFT cameras - making it suitable for use on Olympus OM-D and PEN cameras, the Blackmagic PCC 4K, and Panasonic G-range cameras. It’s amazingly small and lightweight, measuring just 52mm in length and weighing a mere 165g. Even so, it feels solid and well-built. The fixed hood gives some protection to the protruding front element although the lens isn’t weather-sealed. Autofocus is fast and the short minimum focus distance of 10cm enables extreme close-ups. Whereas many MFT format lenses are distortion-free, thanks partly to in-camera corrections, the exaggerated barrel distortion of this fisheye lens is thankfully clear to see.

As one of Sigma’s ‘DG’ lenses, this one is designed for full-frame bodies but can also be used on cameras with smaller APS-C format sensors. Unlike the Samyang 12mm f/2.8 ED AS NCS, the Sigma is a circular rather than diagonal fisheye with a wider viewing angle. It also features automatic aperture control and autofocus in both Canon and Nikon mount options. However, the Nikon-fit version lacks a built-in autofocus motor, instead relying on a screw-drive mechanism from an in-body motor. That shouldn’t be an issue, as all Nikon full-frame SLRs feature an AF drive motor. Sharpness is pretty good across the whole frame and colour fringing remains low even towards the periphery of the image circle.

Circular fisheye lenses for APS-C format cameras are pretty thin on the ground but this 5.8mm f/3.5 Lensbaby is available in a variety of mount options including Canon EF-S, Fujifilm X, Nikon DX and Sony E. It’s also available in Micro Four Thirds fit, catering to an even smaller image sensor. Highlights include an oversized 185-degree viewing angle and ultra-short minimum focus distance, at which the front of the lens comes to a distance of just 6mm from the subject. However, autofocus is unavailable in any of the mount options and you can typically only use the lens in aperture-priority and manual shooting modes. You might also need to enable the ‘shoot without lens attached’ option in the camera’s menu system, as there are no electronic connections.

The best lenses for astrophotography

The best lenses for Canon

The best lenses for Nikon

The best lenses for Fujifilm

The best lenses for Pentax