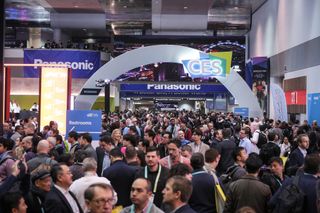 CES 2020, the technology trade super show and the first major event of 2020, is now in the history books. Over 170,000 visitors are estimated to have piled into the cavernous-yet-crammed exhibition halls in Las Vegas, soaking up all the bleeding-edge tech that the electronics industry has to offer.

While it's a show where you're far more likely to see robotics and televisions than cameras and imaging gear, CES has become an increasingly important event for cameraphiles and photography tech heads.

So, now that the show is all packed down and everyone is recovering from their afterparty hangovers, what were the things that impressed us the most? These are the 10 products we loved the most at CES 2020…

Our Canon EOS-1D X Mark III review covers its 20.1MP image sensor and radical new autofocus system, which makes the camera a true hybrid of mirrorless and DSLR technology that enables photographers to get the best of both worlds. Combined with 5.5K internal 12-bit RAW video, a game-changing new Smart Controller, support for HDR stills and video standards plus CFexpress support, it is in many ways the camera of the future.

While it may "only" pack a 20.1MP sensor – which is less than both the Sony A9 II and even the Canon EOS-1D X Mark II – Canon claims that the camera is capable of sharpness and resolution equal to a 24MP pro sensor.

The Canon EOS-1D X Mark III will be available from the end of February for $6,499/£6,499. Aware that CFexpress cards are currently tricky to come by, the Canon is also partnering with manufacturers to offer a bundle including a card and reader, which will determine the final release date.

• Canon also launched a Photo Culling app at CES, that uses AI to find the best shots from a shoot to cut down on editing time when using Lightroom.

What Nikon has done is to effectively take the sensor, AF technology and processing power of the Nikon mirrorless cameras, in this case the Z 6, and fit it to a DSLR body. You still have an optical viewfinder, and while you’re using it you get the same 51-point dedicated phase detection AF sensor used for so long (and to such good effect) in Nikon cameras. The live view experience, however, is transformed. With the on-sensor phase-detection AF of the Nikon Z 6, the D780 will offer much faster live view AF, with 273 AF points and eye detection.

The built-in Wi-Fi also supports HD Live Streaming without the need for any additional equipment, making the trio perfect for live events coverage. All three cameras will be available in late March.

The Autel Evo II is a collapsible camera drone with truly jaw-dropping specs, offering monster performance for both video and stills. Capable of recording 8K video and capturing 48-megapixel images (with 8GB of internal storage to back up its SD card slot), the drone has an impressive 40-minute flight time and weighs in at 1,127g.

If you're after superior image quality and better performance in lower light conditions, the Autel Evo II Pro features a larger one-inch sensor (four times larger than the 1/2 in sensor in the standard model), capable of 6K video resolution and 20-megapixel images.

And if you really want to go high tech, the Autel Evo II Dual also incorporates a thermal imaging camera alongside the standard 8K 48MP camera. All three drones are in production, but no price or release has yet been announced.

Everybody was disappointed that 2020 didn't deliver the flying cars that all those sci-fi movies promised, but Sony has unveiled a concept car capable of (time-of-)flight. The Sony Vision-S employs 33 CMOS image sensors and distance measurement technology to provide the ultimate in safety and comfort, featuring a time-of-flight in-cabin sensor that can detect and recognize people and objects inside the vehicle.

Would we have preferred to see the Sony A7S III? Of course we would. However, Sony making in-roads into vehicular imaging is certainly a fascinating step for the manufacturer – even though the design is a little bit Tesla-esque (though at least Sony had the good sense not to rip off the Cybertruck design).

Nikon has announced that it will be updating its popular P900 superzoom bridge camera with the brand new Nikon Coolpix P950. With specs promising to be perfect for wildlife, motorsport and aircraft photographers, this bridge camera might just catch your attention. New features include RAW shooting, 4K video, an external mic socket, and an accessory shoe.

Boasting an impressive 83x optical zoom, the P950 has an equivalent focal length range of 24-2000mm (the same as on the P900). However, if you really want to get even closer, the 166x Dynamic Fine Zoom is able to digitally extend the upper limit to an amazing 4000mm.

Not so long ago, portable SSDs topped out at 1TB – and such a capacity would cost you an arm and a leg (and most of your internal organs, too). Thankfully, Western Digital's SanDisk brand has revealed a prototype of a portable SSD packing a barely believable 8TB (EIGHT TERABYTES!) of storage capacity. To put this in context, it's enough space to save 280,000 30MB RAW photos, or around 280 hours of 4K video at 500MB per minute of footage.

The SanDisk 8TB SSD prototype connects to your computer via a super-fast 20Gbps USB interface, so you can be sure that even the largest files can be transferred as fast as possible. No word has yet been given on retail availability or pricing, but it's safe to assume that being first to market with such a high-capacity portable drive will result in an equally lofty price tag.

The Nikon 120-300mm f/2.8 FL ED SR VR lens is designed for professional sports and wildlife photographers who need long range, a fast maximum aperture AND the flexibility of a zoom.

The first two we’ve seen plenty of times before, but not very often the third. Nikon does already make an AF-S Nikkor 180-400mm f/4E TC1.4 FL ED VR constant aperture telephoto zoom, but while it does offer longer focal lengths, it’s a stop slower at f/4 rather than f/2.8. This new lens slots in between this and the shorter 70-200mm f/2.8 that most sports shooters keep in their kit bag – and for sports pros offers more flexibility than a 300mm f/2.8.

Foldable phones aren't a new concept; the E-ink Polymer Vision Readius had a rollable screen all the way back in 2007, while Samsung made waves with its Youm concept phone in 2013. However, Chinese company TCL has accomplished something that Samsung, Huawei and Moto haven't: it has made the foldable phone affordable at under $500.

The TCL folding smartphone is currently very much in the concept phase, and is a long way off from making it into the hands of consumers. However, the prospect of a folding phone for under $500 could cause enough shockwaves to affect the pricing structure of foldables – which would be most welcome, since the Samsung Galaxy currently costs $1,980 with the Huawei Mate X coming in at $2,400.

Why shouldn’t action cameras be modular? A brand known for 360 cameras, Insta360 has today announced full details of the Insta360 One R, an action camera described as ‘adaptive’ that comes with up to three interchangeable lens/sensor units – and one of them even has a 1-inch sensor developed with Leica.

Launched at CES 2020, the standard package is called the Insta360 One R Twin Edition, which comprises two interchangeable lens units for both 360º and 4K wide angle wide-angle shooting. It’s on sale from today for $479.99/£365.

Camera rumors for 2020: what cameras are coming, and what to look for in 2020
The best cameras for professionals in 2020: which pro camera system is best?
Smartphone news, camera phone leaks and mobile rumors