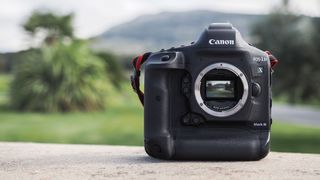 The Canon EOS-1D X Mark III features a 20.1MP image sensor and a radical new autofocus system, which makes the camera a true hybrid of mirrorless and DSLR technology that enables photographers to get the best of both worlds. Combined with 5.5K internal 12-bit RAW video, a game-changing new Smart Controller, support for HDR stills and video standards plus CFexpress support, it is in many ways the camera of the future.

While it may "only" pack a 20.1MP sensor – which is less than both the Sony A9 II and even the Canon EOS-1D X Mark II – Canon claims that the camera is capable of sharpness and resolution equal to a 24MP pro sensor. This is thanks to a completely new quad-layer, 16-point subsampling low pass filter that manages to block moiré without introduces the layer of softness found on other pro cameras.

More importantly, the 20.1MP sensor is the sweet spot for achieving new levels of autofocus performance, as well as the one stop improvement in both dynamic range and ISO sensitivity.

When using the optical viewfinder for lag-free shooting, enabling fast action to be captured in real time, the 1D X Mark III can shoot at a fierce 16 frames per second (using its mechanical shutter), finding focus with a 400,000-pixel metering sensor in conjunction with a dedicated Digic 8 processor, offering 191 AF points (155 of which are cross-type).

When ultimate precision tracking is required, shooting in Live View enables the camera to capture a ferocious 20 frames per second (using either the mechanical or electronic shutter), powered by the brand new Digic X processor using the full 20.1 million-pixel readout of the image sensor, combined with an enormous 3,869 Dual Pixel CMOS AF points. In Live View, the 1D X Mark III is capable of full eye detect autofocus, using the same tech as the Canon EOS R's latest firmware update.

At the heart of the new AF system is the much vaunted deep learning AF algorithm – a subset of artificial intelligence, which used millions of images from the major photographic agencies and Canon ambassadors to teach the camera how to recognize human subjects. While this isn't true AI (despite the name, it isn't actually in a continual state of learning), it enables the camera to perform head tracking with remarkable accuracy – even if no face or eyes are visible.

The camera can record RAW and MP4 video simultaneously to two separate memory cards – which are now dual CFexpress cards. These are a true revelation for shooting, particularly for stills, with a virtually unlimited buffer capable of capturing bursts of up to 1,000 RAW or RAW + JPG images.

The pièce de résistance, however, is the new Smart Controller – which makes the traditional joystick almost redundant for moving AF points around. It works like an optical mouse, turned upside-down; you can whizz your thumb across it and ping the AF point around the screen or viewfinder as fast or as slow as you want to. It’s so good that it's begging to become an industry standard.

The Canon EOS-1D X Mark III will be available from the end of February for $6,499/£6,499. Aware that CFexpress cards are currently tricky to come by, the Canon is also partnering with manufacturers to offer a bundle including a card and reader, which will determine the final release date. In Australia, retailers are offering Canon EOS-1D X Mark III with 512GB CFexpress card and reader for $10,999.