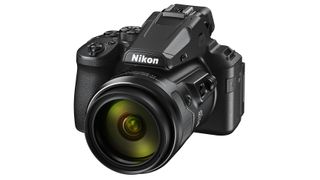 Nikon has announced that it will be updating its popular P900 superzoom bridge camera with the brand new Nikon Coolpix P950. With specs promising to be perfect for wildlife, motorsport and aircraft photographers, this bridge camera might just catch your attention. New features include RAW shooting, 4K video, an external mic socket, and an accessory shoe.

Boasting an impressive 83x optical zoom, the P950 has an equivalent focal length range of 24-2000mm (the same as on the P900). However, if you really want to get even closer, the 166x Dynamic Fine Zoom is able to digitally extend the upper limit to an amazing 4000mm.

Meanwhile, video enthusiasts will be excited to hear that the Nikon Coolpix P950 can shoot 4K/ UHD 30p footage, or Full HD (1080p) video at frame rates of up to 60p. You can also record in stereo sound and manually adjust key exposure settings while you're filming. There's also a full-size hot shoe that can be used to accommodate a mic or dot sight, and a larger vari-angle 3.2in LCD screen monitor that can be tilted and twisted in almost any direction. The P950 also has an improved 1cm 2360k-dot OLED electronic viewfinder with eye-sensor.

Gabriela Januario, Commercial Planning Manager at Nikon UK, commented, "The Coolpix P950 is a feature-packed update to the Coolpix P900, which changed the market for superzoom cameras with its 83x optical zoom. This new camera keeps the impressive zoom range of its predecessor and adds many of the features people have been asking for, including: 4K movies, an improved EVF, RAW support, and a hot shoe for accessories."

Some other interesting features include RAW file support, in-camera time-lapse and connectivity via WiFi, USB and Bluetooth. The Nikon Coolpix P950 is also able to sync photos to your smart device, or even use the smart device to shoot remotely via SnapBridge. Even more impressively, you can even transfer RAW files as well.

The best bridge cameras in 2020
Nikon mirrorless cameras and lenses, the new Nikon Z 50, and where it fits in
Best Nikon lenses: expand your Nikon system with these lenses
Best Nikon camera bag