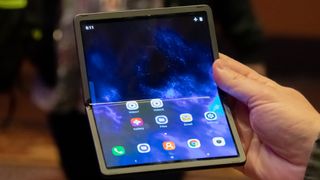 Foldable phones aren't a new concept. The E-ink Polymer Vision Readius had a rollable screen all the way back in 2007, while Samsung made waves with its Youm concept phone in 2013. However, Chinese company TCL has accomplished something that Samsung, Huawei and Moto haven't. It's made the foldable phone affordable at under $500.

There is one small caveat - like many of the products announced at CES 2020, the TCL foldable phone isn't yet available for consumer consumption and is currently functioning as a concept phone. However, that doesn't mean that it doesn't have the potential to disrupt the foldable phone market.

Our sister website Tech Radar explains how TCL's strategy appears to work. "The TCL 10 5G for under $500 sounds surprising, but it's not – it's ripped from TCL's TV playbook. The critically acclaimed TCL Roku TV 6 Series is a high-end 4KTV that competes with normally expensive Samsung, LG, and Sony TVs at a fraction of the price. This has caused TCL's rivals to either price drop their sets or make cheaper variants.

That's exactly what the TCL foldable phone can do: introduce more competition. It can offer an alternative to the Samsung Galaxy Fold, Huawei Mate X and Moto Razr, but it can also put pressure on Samsung and others to compete on price."

The Samsung Galaxy Fold currently costs an eye-watering $1,980, which is twice the price of most of the best camera phones you can currently buy. Meanwhile the Huawei Mate X will be released in limited numbers for a staggering $2,400. If TCL's budget foldable phone will help to nudge these prices down, consumers will be the ones to benefit.

No matter whether you're a fan of foldable phones or not, you can't deny that they seem to be here to stay. We can't wait to see how this technology advances in the future. In the meantime, keep up to date with all of our CES 2020 coverage for more exciting tech news.