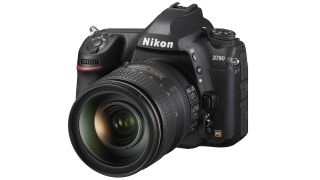 Anyone who thinks DSLRs are the dinosaurs of the camera world needs to watch Jurassic Park to see what happens when dinosaurs come back. Last year the Canon EOS 90D proved a DSLR could do anything that a mirrorless camera could, and now it’s Nikon’s turn to meld the latest mirrorless technology with its classic full frame DSLR design.

What Nikon has done is to effectively take the sensor, AF technology and processing power of the Nikon mirrorless cameras, in this case the Z 6, and fit it to a DSLR body. You still have an optical viewfinder, and while you’re using it you get the same 51-point dedicated phase detection AF sensor used for so long (and to such good effect) in Nikon cameras. The live view experience, however, is transformed. With the on-sensor phase-detection AF of the Nikon Z 6, the D780 will offer much faster live view AF, with 273 AF points and eye detection.

There are Nikon DSLRs with higher resolution (the Nikon D850) and faster burst shooting (the Nikon D5 and upcoming Nikon D6), but with its clever blend of DSLR and mirrorless technology, judged purely in design terms, the D780 could be the best Nikon camera yet.

What’s more, while the D780 can shoot at 7fps when using the viewfinder, a modest increase over the D750’s 6.5fps, this leaps to 12fps in live view mode, with silent shooting and full AF tracking. If even that isn’t fast enough, Nikon’s new DSLR offers 30fps 8MP image capture and 120fps at 2 megapixels – though with focus and exposure locked on the first frame.

Fast as it is, this doesn’t make the D780 a sports specialist, so don’t imagine it’s any kind of rival to Nikon’s upcoming D6. The buffer capacity of 28 raw images or 100 JPEGs is too low for sustained bursts – but it’s still an excellent camera for occasional high speed use.

Physically, there are few surprises. The D780 has traditional DSLR styling with a deep grip, and it does boast magnesium alloy construction and weather seals. The sensor offers sensitivity range of ISO100-51,200 (expandable to 50-204,800) for what Nikon claims will be exceptional low-light performance.

The optical viewfinder uses a classic pentaprism design with 100% coverage and 0.7x magnification, while round the back there’s a 2.36 million dot LCD display which tilts up and down but not sideways (so it’s less useful with the camera held vertically). The rear screen doesn’t flip forward through 180 degrees for vlogging, either, but then many filmmakers and vloggers use external screens anyway.

Other D780 specs include dual UHS II SD card slots (not CFexpress, interestingly) and an EL15B battery, though we don’t yet know the claimed battery life for this.

• These are the best DSLRs right now
• Which is the best Nikon camera today?
• The Nikon mirrorless system explained