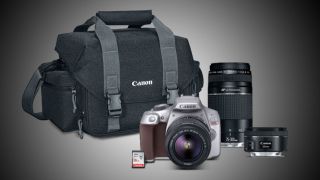 This amazing Canon Rebel T6 triple lens deal for just $499.99 direct from the Canon US store is currently sold out, but there are other  Canon Black Friday bargains.View Deal

First, there’s the camera itself. This is the EOS Rebel T6, which is a perfectly sound beginners camera with 18 million pixels, no-fuss controls but also enough manual control to grow with you as you learn about photography. It comes with Wi-Fi, NFC and Bluetooth so that you can share photos directly with your smartphone.

You also get Canon’s EF-S 18-55mm f/3.5-5.6 IS II kit lens, and note that this comes with image stabilisation where a lot of cheap Canon lens bundles don’t.

Then there’s an EF 75-300mm f/4-5.6 III USM too, though we need to sound a note of caution here – it looks like this is the unstabilized version of this lens, so you’ll have to keep shutter speeds just a little higher to prevent camera shake.

Oh, and let’s not forget the Canon 300DG Gadget Bag included in the deal and a 16GB SanDisk memory card. It’s all a bit of a mixture, but at this price it’s an amazing deal for anyone just starting out.

• The best camera deals on Black Friday and Cyber Monday 2017