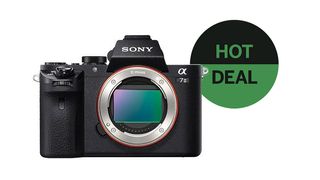 If you've been looking for a great Sony camera and lens deal, then you're in luck! Wex Photo Video is now offering £50 off all Sony cameras and lenses that are over £600 with the special code SONY50! That means that you can pick up the fantastic Sony A7 II for just £849, rather than its original price of £899.

The Sony A7 II features a 24MP CMOS sensor and an impressive 5-axis Image Stabilization, which means you can capture photos and video without having to worry about camera shake ruining your shots. The A7 II is also capable of 5 fps AF/AE shooting with tracking with Advanced Hybrid AF (phase-detect and contrast-detect).

The Sony A7 II has a 3/0" tilt-able LCD screen and also features NFC and Wi-Fi for an easy way to transfer files when you're on-the-go. It produces Full HD 60p video and has Sony's S-Log2 gamma setting, which is featured in professional camcorders. This 1,300% wider dynamic range allows for a smooth graduation with reduced white-out and black-out.

While this Sony A7 II discount is certainly a great deal, don't forget that the SONY50 discount code can be used on any Sony camera or lens that's over £600 at Wex Photo Video. If you're thinking of investing in a new lens to go with your shiny new camera, the Sony FE 35mm f/2.8 ZA Carl Zeiss Sonnar T* lens would only be £579 from its original price of £629.

Alternatively, if you're looking for a standard zoom lens, why not pick up the Sony FE 24-70mm f/4 ZA OSS Vario-Tessar Carl Zeiss T* lens for just £629, down from its original price of £679.

Best Sony lenses in 2020: top lenses for Sony mirrorless and Alpha cameras
Best Sony camera in 2020: from Cyber-shots through to Sony Alphas
Best Sony A7 III deals in May 2020