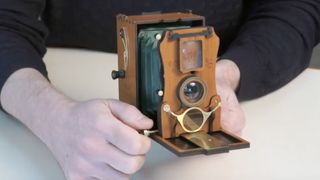 We have seen some unusual instant cameras in the last couple of years, but the JollyLook Auto is undoubtedly the weirdest – and has the weirdest name.

The Ukrainian designers have set out to make a camera that looks like a retro mahogany and brass bellows camera - but one that shoots on Fujifilm Instax film. The result is a camera that look seriously old-fashioned - but spits out the ultra trendy Instax Mini prints. Its just the thing for a steampunk party!

The camera has just launched on Kickstarter, and the project is already fully funded (with 19 days still to go). So, that those who pledge into the crowdfunder should be able to get their cameras by November – so just in time for Thanksgiving and Christmas.

The camera gives you more control over the picture taking process than most instant cameras, with a focusing rail to extend the bellows, and a choice of aperture settings.  Once shot, the film is ejected manually using a crank handle on the side of the camera.

The eventual price of the camera will be $129, but there is still a chance to put your name down for one as an early bird supporter and get the camera for as little as $79.