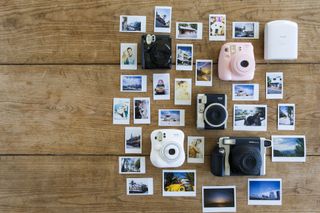 Instant cameras are extremely popular at the moment - offering analog fun in a digital age. At weddings, at parties, or just to chronicle your life, instant prints have become an essential gadget. But if there is one drawback, it is the cost of the film. So wouldn't it be great if you could find a great cheap Instax film deal?

There are several different instant film types around... but by far the most popular and widely used is the Fujifilm Instax Mini pack. This is used in a variety of Fujifilm cameras such as the Instax Mini 9, Mini 11, Mini 70, the new Instax Mini LiPlay and more. But Instax Mini film is also used in some Leica cameras , Lomography cameras and portable printers too.

The usual way to save money on the cost of each print is to buy multi-packs... with the twin-pack being the most popular choice for those looking for a cheap Instax film deal.

But Fujifilm has recently introduced a mega 50 print bundle - that gives you five packs of Instax Mini film. This is like to be the best buy for serial Instax users

Get five packs of Instax Film which will give you 50 prints from your instant camera - available from Amazon.com.View Deal

Introduced in Europe earlier this year, this 50 sheet pack is a great deal for Instax Mini users in the UK... and works out at just 70p per print. View Deal

Instax Square film gives, as the name suggest, a square image. This format of film is used on the Fujifilm SQ6, SQ10 and SQ20 instant cameras. As usual, the best deals are found by buying multi packs - with each pack containing 10 prints.

The best instant cameras in 2020