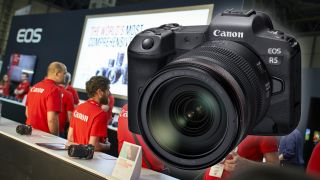 Canon has announced that it will be revealing the Canon EOS R5 to the public for the first time at The Photography Show, taking place 14-17 March 2020 at the NEC in Birmingham, United Kingdom.

The remarkable-looking Canon EOS R5, which was only revealed by the company last week, seems set to shake up the camera industry with its impressive specs, including 8K video and in-body image stabilization for the first time on a Canon body

"Exciting news! The recently announced EOS R5, RF 100-500mm F4.5-7.1L IS USM lens and new extenders will be making an appearance at the show," confirmed Canon UK. "Make sure you visit our stand to get your first glimpse at the new additions to the EOS R System."

The Photography Show has been home to a number of reveals of new cameras and technology over the years, but the global debut of the Canon EOS R5 is a massive coup for the imaging super show. Photographers will have their first ever opportunity to get up close and learn more about the full-frame mirrorless camera, which Canon has patiently been waiting to unleash.

• Everything you need to know: The Photography Show 2020

"Built on the revolutionary EOS R System and developed with customer feedback and market needs in mind, the EOS R5 features unrivaled specifications. Including high-speed, high-resolution, 8K video and unparalleled image stabilization – allowing photographers and filmmakers to push creative boundaries harder and capture action better than ever before."

The Canon stand, which will be situated at E131-D141 in Hall 5, will feature interactive demonstrations, shooting scenarios and a full program of speakers. A multi-zone affair, the stand will feature a dedicated Camera & Video Zone, Print Zone, Spotlight Stage, Bitesize Stage, CPS & Expert Zone, Lens Bar and on-site Store.

The Photography Show 2020 will play host to over 300 exhibitors, with other high-profile products such as the Nikon D6 making their UK debut.

GET YOUR TICKETS FOR THE PHOTOGRAPHY SHOW