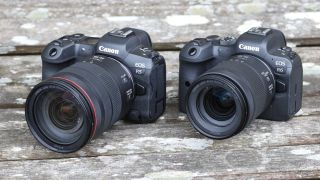 It’s the question everybody is asking: Canon EOS R5 vs R6 – which is the best? Well, now that we’ve been hands-on with both of Canon’s latest full-frame mirrorless cameras, we can break down which camera is best suited to your specific needs.

The R5 is obviously an 8K powerhouse, which makes it unbeatable for video, but it also boasts a 45MP image sensor that’s spectacular for stills. The R6 is no slouch in either department, however, and actually boasts superior ISO performance and low-light autofocus.

There’s a lot to unpack about these bodies, both of which are undoubtedly among the best Canon cameras we’ve ever seen, as well as two of the best mirrorless cameras on the market right now.

They share a number of core specs, such as the in-body image stabilization that’s good for up to an astonishing 8 stops (CIPA-rated) of stability, the USB PD support that enables them to be charged and powered by a USB source, along with the improved LP-E6NH battery (featuring 14% more capacity). However, there are plenty of significant differences between the two systems. Here’s how they match up in the specs stakes in all the important categories…

The 45MP sensor in the R5 is a brand new design, and Canon claims that it’s actually the highest-resolving sensor it has ever produced – delivering detail even higher than that of the Canon EOS 5DS / R, which has a 50.6MP sensor. This is because it features the same redesigned low-pass filter seen in the flagship Canon EOS-1D X Mark III, with 16-point subsampling that results in supreme image quality.

Not to be outdone, the 20.1MP sensor in the R6 is actually the same high-speed one found in the flagship – though it lacks the new low-pass filter. So, in both cases, you’re getting Canon’s most cutting-edge technology with flagship-level flourishes.

The question, then, becomes which resolution is right for you? It’s easy to think more megapixels = better camera, but think about your needs and your workflow. Having 45MP images is great if you want to capture near-medium format levels of detail, but it’s overkill for everyday shooting – and transferring, editing and storing those images might be more trouble than it’s worth. Especially if you’re taking advantage of the 20fps burst shooting (see below)!

Conversely, while 20.1MP might sound modest in comparison, remember that this is the pixel count preferred by pros. If you’re shooting 20 images every second, you want those files to be a manageable size – but you also want enough resolution and detail in your finished images. Well, if 20.1MP is enough for professional sports photographers to produce magazine covers and double-page spreads, 20.1MP is enough for all but extraordinary needs.

The R5 and R6 both offer 10-bit HEIF in HDR shooting mode, as well as 14-bit RAW files using the mechanical shutter or 12-bit when shooting electronically.

However, while they share the same raw speeds, the buffer depth in each camera is very different – a result of the different sensor resolutions in the respective bodies.

Since it churns out hulking 45MP photographs, the Canon EOS R5 can maintain these shooting speeds for 350 JPEGs or 180 RAW images. The Canon EOS R6 has a huge advantage here, since it produces 20.1MP photos, and can maintain bursts of over 1,000 JPEGs or 240 RAWs.

So, if you’re shooting sports or other fast-moving action, the R6 can buffer almost three times as many JPEGs.

The R5 and R6 share many of the same base autofocus capabilities, which includes the all-new Dual Pixel CMOS AF II phase detect technology, facilitated by the latest Digic X processor.

Crucially, they both possess the same Deep Learning AF technology featured in the Canon EOS-1D X Mark III. This AI-powered system delivers fantastic performance that includes eye, face and head detect (so the AF still prioritizes the head, even if no eyes or face are visible, whether the subject turns their back or is wearing a helmet or goggles).

In fact, both cameras actually trump the flagship by featuring Animal AF Tracking. This isn’t available in the 1D X Mark III, but takes the same Deep Learning technology and expands it to enable eye, face and body tracking of dogs, cats and birds – including birds in flight.

The R6 also offers superior low-light AF (thanks to its increased ISO sensitivity, below), capable of autofocusing down to -6.5EV (the equivalent of a completely blacked-out room illuminated by a single candle) compared to the -6EV of the R5.

For pure speed, though, the R5 is the champion, with Canon claiming it to have the world’s fastest AF speed at just 0.05 sec!

Thanks to its lower resolution, equating to larger photosites (since there are fewer pixels on the sensor, each pixel can be larger and thus gather more light), the R6 boasts an ISO range of 100-102,400, expandable to 50-204,800. For video the R6’s Auto and manual ISO ranges are the same as the R5, but here the maximum sensitivity can be set at the expanded ISO204,800.

So if low light performance is most important to you, the R6 has the edge – especially in video. And speaking of video…

Aside from the sensor resolution, this is obviously where the biggest difference lies between the two cameras. The Canon EOS R5 can record full sensor width (uncropped) 8K raw video, internally, up to 29.97fps in 4:2:2 12-bit Canon Log or HDR PQ (both H.265), and can capture both UHD and DCI.

It is equally formidable in 4K (UltraHD) mode, recording full-width video internally at up to 119.88fps in the same 4:2:2Canon Log or HDR PQ, with external HDMI recording up at up to 59.94fps. Dual Pixel CMOS AF, with eye and animal AF, is available in all video modes.

The 8K video isn’t just good for videography, though; the R5 features a 35.4MP Frame Grab facility, enabling you to take JPEGs or HEIFs from your footage at a higher resolution than most cameras can take regular photographs! Obviously these images don’t have the same dynamic range as standard photographs, but it’s still an impressive option.

The R6 offers a Frame Grab function of its own, and can extract 8.3MP JPEG or HEIF still images from its 4K recordings.

In a first for Canon’s non-cinema cameras, the R5 and R6 both offer zebras – the visual overlay used by professionals, which depicts overexposed areas with a striped ‘zebra’ pattern.

While both bodies feature dual memory card slots – which is a first, for Canon’s mirrorless line-up – the setup is different for each camera.

Unsurprisingly, given the demands of the huge 8K video files (and the accompanying transfer speeds), the Canon EOS R5 has been outfitted with a high-speed, high-capacity CFexpress type B card slot. However, you won’t need to shell out for new memory cards right off the bat as it also possesses a UHS-II SD card slot.

The Canon EOS R6, meanwhile, features twin UHS-II SD card slots that can handle the requirements of both the 4K video as well as the rapid-fire continuous shooting.

This is mainly due to the construction, with the R5 featuring a magnesium alloy body and chassis while only the chassis of the R6 is made of a magnesium alloy (with outer panels consisting of polycarbonate resin with glass fiber). Both cameras feature weather sealing, though, on par with standards set by the 5-series and 6-series bodies respectively.

While the cameras are near-identical from the rear, the top plates are quite distinct. The R5 retains the illuminating OLED panel seen on the EOS R, along with a mode button ensconced within the rear exposure dial. The R6, meanwhile, eschews the OLED panel and features a mode dial familiar to most EOS cameras.

In terms of wireless connectivity, both cameras feature 2.4GHz Wi-Fi and Bluetooth 4.2. However, the R5 also features integrated 5GHz Wi-Fi support – which actually puts it a peg above the flagship Canon EOS-1D X Mark III.

In addition, the R5 also supports SFTP networking and ethernet connection for gigabyte speed, both of which are available via the optional Canon WFT-R10 battery grip and Wi-Fi transmitter – which also boasts 2x2 MIMO (multiple-input multiple-output) antennas for faster and further data transfer.

If the fastest and most robust file transfer is important, both wired and wirelessly, the R5 offers tip-top connectivity that can be used in professional working environments.

We need to run both bodies through our full battery of tests before delivering a definitive verdict. If you're trying to work out whether to preorder the R5 or R6, though, here's broadly how the two break down.

Obviously if you're looking for the most comprehensive video recording options on the market, the Canon EOS R5 is the way to go. And if you want to shoot high-resolution images – including wildlife shots that you can crop down – its 45MP sensor records incredibly detailed photographs. However, not everybody needs 8K video or 45MP images.

The Canon EOS R6 is a much more sensible option for most vloggers and videographers, and provides a great alternative to the flagship 1D X Mark III if you want to shoot fast action. On top of that, it's the better-specced camera for low light photography and it uses a pair of SD cards – so unlike the R5, you'll be able to save to both slots without having to invest an expensive new memory format.