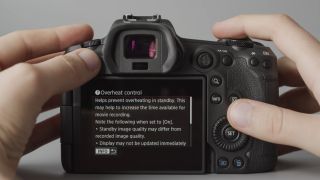 We already knew that the new Canon EOS R5 is limited by overheating in its 8K video mode. However, Canon has confirmed that overheating also affects the recording durations when filming 4K video – all the way down to 4K 30p.

The manufacturer was very up-front about the overheating limits in 8K video, and we know that the Canon EOS R5 will record about 20 minutes of 8K before it needs to shut down.

The limits imposed by overheating were made less clear when it came to other recording modes, however, and they are coming as a bit of a shock to many consumers who were expecting – albeit unrealistically – that things like 4K 120fps would not cause the camera to heat up.

Professional camera specialist CVP was briefed by Canon on the recording limits of each video mode caused by overheating. This was explained in CVP's detailed breakdown of the R5 specs, and Canon followed up by providing further information to the company's tech advisor, Jake Ratcliffe.

The recording limitations are as follows:

So, what actually happens when the R5 overheats? The camera shuts off and requires a cooldown period before it can resume shooting video. CVP's breakdown detailed the amount of 'recovery time' required once the camera has overheated, and the amount of recording that is possible afterwards:

Some may view these limitations as a bit of a sting in the tail, and some critics are suggesting that Canon mis-sold the R5's capabilities – even going as far as to say that these limitations mean it is not a professional-grade camera.

Of course, Canon was clear from the beginning that the EOS R5 is intended to be a secondary camera that would pair in a professional environment with the  Canon EOS C300 Mark III cinema camera. And indeed, as a B camera, these limitations really aren't a deal-breaker; 20-minute takes are rare for primary (A) cameras, and changing set-ups often takes more than 10 or 20 minutes.

Still, the important thing is that this information is out there and available prior to the camera's actual release – which is more than could be said for other manufacturers, who said nothing of the 4K overheating issues in their own cameras until they were literally shutting down in the hands of reviewers…