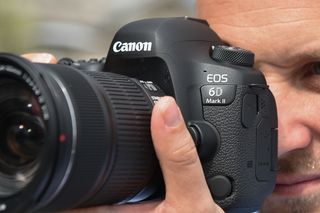 The best full-frame DSLRs aren't just those aimed at professional photographers. There are more reasonably priced cameras for enthusiasts too, and now that there are some affordable entry-level full frame cameras, it's now easier than ever to step up to full . frame.

It's true that the best full-frame mirrorless camera models now compete on equal terms with DSLRs and even offer some advantages, but DSLRs are still the top choice for many photographers, and we have a DSLR vs mirrorless camera article that spells out the differences.

It's obvious that camera makers are still committed to DSLR designs too. Nikon has just announced its brand new Nikon D780, the ground-breaking Canon EOS-1D X Mark III has been launched in time for the 2020 Olympics, and it's going to be joined by the Nikon D6. All three use the latest technologies to keep the DSLR design very current, and very relevant for today's photographers.

You don't have to get a full frame DSLR of course. The launch of the brilliant Canon EOS 90D in 2019 proved that DSLRs are alive and kicking in the enthusiast market too. We have a separate guid to the best DSLR to get right now, but here we're concentrating on those with full frame sensors.

We've weighed up all factors in putting together our list, including price, so you can be sure you're getting the best camera for your money.

For top performance without spending over the odds, this is the best buy

It took Canon six years to update the original 6D, but the Mark II is well worth the wait. This camera has a raft of handling improvements, as well as boasting a higher megapixel count and late-generation processor. Key upgrades include two new autofocus systems, the main AF module having 45 phase-detection points which are all cross-type. For live view and video, autofocus is much faster thanks to the Mark II’s Dual Pixel AF image sensor, which enables hybrid phase/contrast detection. The new fully articulated touchscreen looks great from any angle and works a treat for selecting AF points on the fly, and for navigating the intuitive ‘Quick’ menu. You also get maximum burst rate of 6.5fps and the addition of NFC and Bluetooth to the existing Wi-Fi and GPS.The Canon EOS 6D Mark II is a great camera... though its position as number one in our list is under threat from the new Nikon D780. We'll decide where this new camera fits in just as soon as we've carried out a full test!

For all-round abilities, the D750 has established itself as one of our favourite Nikon DSLRs. The 24MP sensor includes an optical low-pass filter to protect against moiré patterning and false colour, and this is coupled with an EXPEED 4 processor, while the body is finished with tilting rear screen and dual card slots. On the inside, Nikon has furnished the camera with a 51-point AF system, Wi-Fi and the option to shoot at up to a very respectable 6.5fps High-ISO image quality is about as noise-free as the Canon EOS 6D Mark II, but the D750’s 51-point autofocus system is a little better. However, its live view autofocus uses contrast AF and it's much slower than the Canon's. The Nikon D750's image quality is sumptuous in all respects, though, and the overall performance is spectacular considering the camera’s increasingly discounted prices. It's been around a few years, though, so value for money is probably it's biggest selling point. The new Nikon D780 brings the design bang up to date, though, so stand by for our full review!

With a 45.7MP sensor, fast burst shooting and 4K video, it does it all!

It's hard to think of a camera that's made as much of an impact as the D850 in recent years, and it certainly has some strong competition. Whereas most DSLRs have either high-resolution images or speed and sensitivity as their priority, the D850 manages both, with its 45.7MP sensor, 7fps burst shooting mode and the same 153-point AF system that won many fans when it first featured in the D5 heading up a long list of impressive specs. With great 4K video that makes this regarded as the best camera for filmmaking by some users, along with superb build quality and all the customization you need, and you can see just how much it's likely to appeal to a landscape photographer as it might a wedding or event shooter. Right now, perhaps the only mark against it is the fact that Nikon also has a number of excellent full-frame alternatives that cost a little less, such as the compact D750 and the D810 that it replaces. Still, if it the latest tech, versatility and quality of both stills and video you're after, right now there's nothing else like it.

Jack of all trades and master of most of them

The EOS 5D Mark IV’s sports Canon's latest-generation sensor, advanced metering system and 61-point autofocus module. Live view autofocus is also excellent, thanks to Canon's Dual Pixel CMOS AF system. Weather-seals are also improved, while a new touchscreen speeds you through menu choices, and Wi-Fi, NFC and GPS have all been added. It may not quite be the best 4K camera, thanks to a heavy crop factor and the somewhat inefficient Motion JPEG format, but the 5D Mark IV still produces excellent results when it comes to video. Image quality is unquestionably great, with high-ISO images managing to be more detailed than those from the EOS 6D yet equally free from noise. While it lacks the second card slot, the Canon EOS R is otherwise a mirrorless version of the 5D Mark IV. The biggest problem for the EOS 5D Mark IV is the Nikon D850 (above)! The D850 is better in just about every respect (barring live view autofocus).

A tough DSLR with real finesse under its thick skin

Pentax does not have the same brand awareness as Canon and Nikon, but it's still making DSLRs and they're still worth a long, hard look. The K-1 Mark II feels typically robust, solid and dependable, and features a full set of weather-seals. The megapixel count is impressive at 36.4MP, and the tilting rear LCD is similarly high-res, but it’s not a touchscreen. Going one better than some of the latest Canon DSLRs, the Pentax has a 5-axis sensor-shift image stabilization system that works for stills instead of just for movie capture. Not just for beating camera-shake with any attached lens, the stabilization system has advanced modes for anti-aliasing correction, and for enhancing the capture of fine detail. There’s also an ‘astrotracer’ mode, which employs the built-in GPS module, electronic compass and horizontal/vertical tilt sensors, along with the stabilization system, to stop heavenly bodies appearing to streak across the sky in long exposures. By contrast, the sensor-based autofocus for live view and movie capture is relatively poor, and movie resolution tops out at 1080p. For stills, the full-frame burst rate is a pedestrian 4.4fps. There's a reasonable range of full frame Pentax lenses to choose from, but there isn't the same depth as you get with Canon and Nikon.

More megapixels than any other full-frame DSLR

The EOS 5DS R is virtually identical to the older EOS 5D Mark III in external appearance and handling, which is no bad thing. Canon has, however, redesigned the newer body to be more rigid yet slightly lighter, and there’s a new shutter unit that reduces vibrations. For capturing detail and texture, the EOS 5DS R is simply epic. Indeed, some of Canon’s own EF lenses didn’t make it onto the approved list for use with this camera because they’re not sharp enough to do it justice. The trade-off is that high-ISO images are relatively noisy, and it's presumably for this reason that Canon has limited the standard ISO range a maximum ISO 6,400 setting, so it's not necessarily the best option if low-light shooting is your thing. The model was launched alongside the more affordable EOS 5DS, which is largely the same model, save for the fact that the effects of its optical low-pass filter are not cancelled out (whereas here, they are, for better detail). The EOS 5DS R and its 50-megapixel sensor were ground-breaking in their time, but the camera is now quite dated by modern standards and 50 megapixels rarely makes headlines any more.

Bigger and beefier than the A7R series of compact system cameras, the A99 II is, strictly speaking, not a DSLR, but close enough in design and intentions to be considered alongside them. It offers more assured handling and feels better balanced with most full-frame lenses. There’s a hybrid autofocus system but, unlike that of the A7R II, it includes phase-detection on both the image sensor (399 points) and a separate AF module (79 points). Five-axis sensor-shift image stabilisation features, as does a 2.36MP OLED electronic viewfinder, while the rear screen offers full articulation rather than just vertical tilt. The camera also boasts blisteringly fast 12fps continuous shooting, complete with autofocus tracking and live metering. In recent years Sony's attention has shifted away from its SLT bodies to its A7 and A9 compact system camera lines, and this places the future of the system in doubt. Still, while it may not be the best Sony camera full-stop, for now we like the A99 II – a lot. So why is it so far down our list? We think it's the end of the line for the Sony SLT camera design, and while there's a good selection of A-mount lenses out there now, we're not expecting a whole lot more.

The Nikon D610 is still the cheapest full-frame Nikon DSLR, but supplies are dwindling and you may have to hunt around a little to find one now. If you don't need the latest features, the D610 is well worth considering, even now. Sure, it may not have all the fancy tricks of the D750 (above) such as a tilting screen or Wi-Fi, but you still get a 24.3MP full-frame sensor, two card slots, Full HD video and a (fixed) 3.2in LCD. Image quality is excellent and the autofocus system works very well, despite the fact that it's not quite the newest module Nikon offers. The D610 would be a great first-time, full-frame camera, or alternatively a capable backup body for a more advanced model.