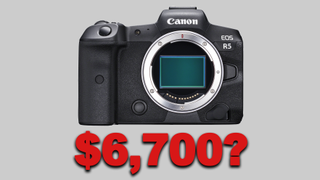 Of course, it is entirely possible that the AU$10,499 was just a placeholder figure that was plucked out of thin air by Camera Warehouse, the retailer in question. However, it is far more common to see "TBC" listed when a price hasn't yet been confirmed; when a retailer adds a price, especially such a specific one, it is very often because that is the price they have been given by the manufacturer.

And since the Canon EOS R5 has long been rumored for a full announcement this month or next, the timing would certainly be right for Canon to have informed retailers of pricing so that orders can go live.

Obviously it is down to Canon itself to announce the price, though – and the original Camera World listing has now been amended with an AU$200 price for a holding deposit, no doubt due to a few furious calls from Canon Australia.

So, if accurate, what does this pricing mean? As noted, it is significantly more than the cost of the Canon EOS R, but that isn't really a helpful comparison. The EOS R is an enthusiast body that is two years old, with only a single card slot, cropped 4K video, no in-body image stabilization and a 30.3MP sensor.

The R5 is a professional-grade body with dual cards (including CFexpress support), full readout 8K RAW 10-bit internal video, in-body image stabilization, animal AF, and what is all but confirmed to be a 44MP sensor. It is in every possible way superior to the junior model, and as such merits a higher price.

Canon EOS R5: everything we know about the revolutionary 8K camera
Canon EOS R review
The best cameras for filmmaking